While 32 teams are preparing for the World Cup, the USA met Bolivia, a follow absentee from Russia 2018, in Pennsylvania for a friendly that served mainly to give American fans a glimpse of the USA's new generation. With a starting lineup averaging an age of 22.44, the USA cruised to a 3-0 win. 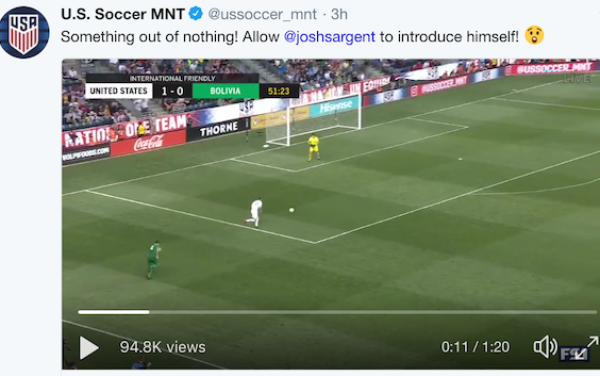 1. Josh Sargent is the center forward to watch.

Bolivia finished ninth in the 10-team South American qualifying for Russia 2018 and only brought two starters from its last qualifying game to Pennsylvania. Unavailable were all but one player from Bolivia's four strongest clubs because they're involved the Torneo Apertura semifinals.

Sargent spearheaded the U.S. attack against the Bolivians. His 20th-minute shot after a one-two with Tim Weah was blocked by a defender. He set up a shot for Christian Pulisic two minutes later, and in the 23rd minute mis-hit a volley on the turn. He got his goal in the 52nd minute in remarkable fashion.

When goalkeeper Carlos Lampe's chip to defender Luis Haquin came up short, Sargent took the perfect first touch that allowed him to swivel, face the goal, and hammer a low shot into the net.

Sargent signed with Werder Bremen upon his 18th birthday last February and has appeared in tournaments with its U-19s while training with U-23s and occasionally with the full team.

The Pennsylvania homecoming of Christian Pulisic did not go as planned as the 19-year-old gave his least impressive performance in his 21st U.S. national team game. Pulisic, who played 56 minutes in Borussia Dortmund's 1-1 friendly tie with LAFC last Tuesday, failed to shed defenders in his usual dynamic manner and misplayed several balls.

Fortunately for the USA, the other youngsters provided enough spark for a convincing win.

Only two MLS players, Toronto FC goalkeeper Alex Bono (who didn't have to make any saves) and LAFC defender Walker Zimmerman (scorer of the USA's first goal with a fierce header off a corner kick), saw action against Bolivia.

The foreign-based players included the familiar Tim Weah, a New York product who has starred for U.S. youth national teams since U-14, played for the USA at last year's U-17 World Cup, and is the son of Liberian president and former World Player of the Year George Weah. The young man who set up Weah's goal against Bolivia was the lesser known Antonee Robinson, who at left back made several effective forays down the flank.

Robinson is a 20-year-old England-born son of an American father --  former Duke player Marlon Robinson. Antonee Robinson was first called in by the USA with the U-18s in 2014 while part of Everton's youth program. He has been playing on loan for England second-tier Bolton Wanderers and in December made headlines by setting up Bolton's winning goal in its first League Championship road win in 999 days.

Tim Weah joins in on the fun with his first USMNT goal! pic.twitter.com/A9p4hcErtO