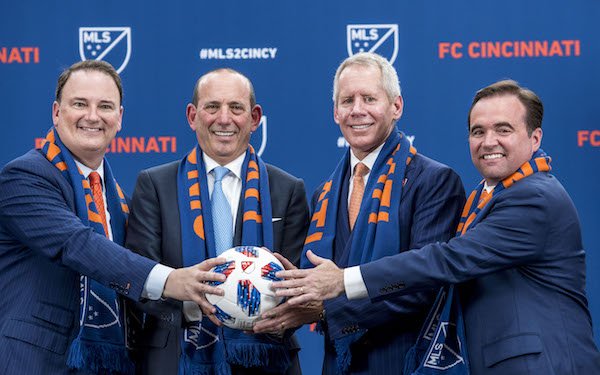 Cincinnati will play at the University of Cincinnati's Nippert Stadium before moving in its West End stadium.

FC Cincinnati has already set up a season-ticket process for the 2019 season with current season-ticket holders getting first priority. Fans without priority can earn a higher priority in 2019 by purchasing pro-rated 2018 season tickets, which will be available through June 30. (It could probably sell more season tickets at 35,000-seat Nippert Stadium than its new stadium, which will seat 21,000 fans, will hold.)

FC Cincinnati's announcement comes only have nine months before it plays its first game. The NASL's Minnesota United was announced almost 23 months before its launch in 2017. Before that, Orlando City had 14 months to ready for its 2015 launch.

FC Cincinnati, though has been working behind the scenes in anticipation of being approved for 2019.

Nashville. Nashville's Fair Board members will meet on June 12 to review the revised plans for the Fairgrounds that include a soccer stadium.
If Nashville's stadium isn't ready until 2021, Nissan Stadium, home of the NFL Titans, should be the soccer team's temporary home in 2020.

Miami. Miami's stadium situation remain in flux. What is new? David Beckham's new Miami partners look for other sites besides the Overtown location. The Hard Rock Stadium (NFL), Marlins Park (MLB) and FIU Stadium are temporary options. For how long will be the question.