In “What We Think About When We Think About Soccer,” author Simon Critchley  explores, from a philosophical perspective, why soccer means so much to so many different people. 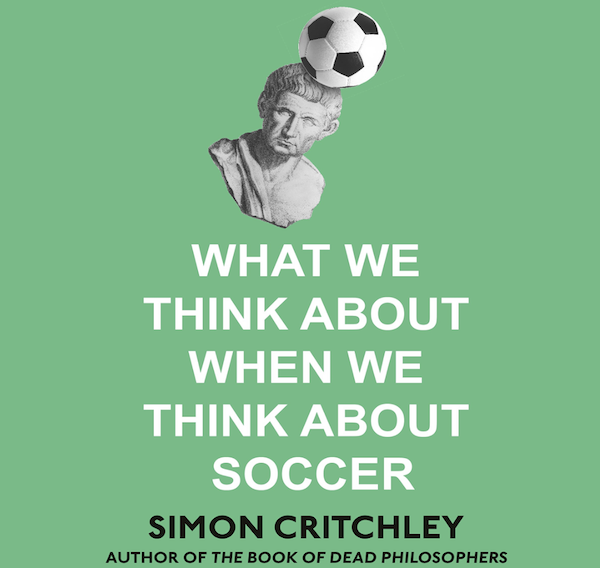 Does soccer appeal to us because of tribal and national identity? What roles do racism and sexism have in the game today and how do they reveal themselves? How do fans interpret the game across cultures, languages, and genders?

Critchley brings his formidable philosophy acumen into the world of soccer; the result is a unique analysis of the relationship between the game and everyone else.

Using “phenomenology,” or “the description of what shows itself to us in our everyday existence,” Critchley attempts to “make explicit what is implicit in our experience.” And he does so quite successfully; clearly written with plenty of examples, the pages contextualize soccer in the socio-political climate of both yesterday and today, as well as relying on great thinkers of the past to better illustrate his points.

Critchley admits to the corrupt transnational corporate structure of soccer, but instead of struggling through the dichotomy between the socialist form of soccer and its capitalist reality, he chooses to focus on the “delights” of soccer.

In Chapter 4, Critchley explores what it would be like to be a ball. In the end, he finds the ball is closest to an inanimate puppet: just as the puppet has “potential for life, hovering somewhere between life and death,” the soccer ball is the same in that even when they lie around un-kicked, “it is hard to resist the call they seem to make: come on, take me out, play with me!”

Critchley devotes a chapter to Zinedine Zidane and the 2006 film “Zidane: A 21st Century Portrait.” He explores the role of sound, smell, and “sensate ecstasy” in experiencing soccer. For Critchley, the film works because of the purity of it; the viewer gets to hear the “sound of noise” and develops a close relationship with Zidane as he walks, jogs, and sprints on the field.

Peppered throughout the book are beautiful black and white photographs illustrating the emotions of the game and the personalities he writes about. For any soccer lover with an interest in philosophy this is certainly the book for you. But even if you’re more of the former than the latter, Critchley’s clear writing style provides the reader with a deeper understanding, and love even, for the most thought-about sport around the world.

RECOMMENDATIONS
Ian Plenderleith:
Matchdays: The Hidden Story of the Bundesliga By Ronald Reng
Brian Clough: Nobody Ever Says Thank You By Jonathan Wilson
Goalkeeper Are Different By Brian Glanville
The Ugly Game: The Qatari Ploy to Buy the World Cup By Heidi Blake and Jonathan Calvert
The Football Man  By Arthur Hopcraft

Grant Wahl:
Fever Pitch By Nick Hornby
The Girls of Summer By Jeré Longman
Among the Thugs By Bill Buford
The Away Game By Sebastian Abbot
Inverting the Pyramid By Jonathan Wilson

Sissi:
Forward: A Memoir by Abby Wambach
It's Not About the Bra: Play Hard, Play Fair, and Put the Fun Back Into Competitive by Brandi Chastain
When Nobody Was Watching: My Hard-Fought Journey to the Top of the Soccer World by Carli Lloyd
Choose to Matter: Being Courageously and Fabulously YOU by Julie Foudy

Brian Glanville:
Sir Alf By Leo McKinstry
The Soccer Syndrome By John Moynihan
The Simplest Game By Paul Gardner
Nice Guys Finish Last: Sport and American Life By Paul Gardner
SoccerTalk: Life Under the Spell of the Round Ball By Paul Gardner
The Glory Game By Hunter Davies