New U.S. men’s national team general manager Earnie Stewart is charged with leading the hiring process for a new head coach and instilling and supervising a style of play vision. 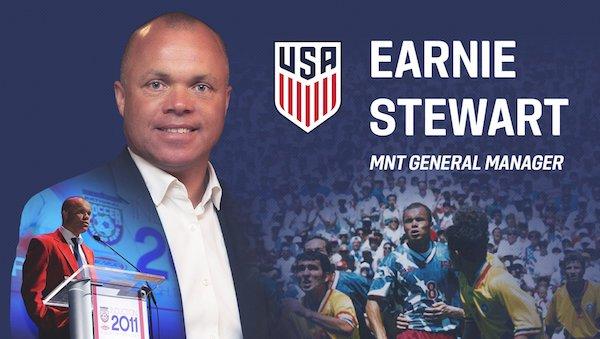 "There’s also the other part,” he said, “to make sure that our style of play, the way that we want to play during the game, the tactical principles that we have, that you see those on the field.

“The style of play will be evident for people that are close to the team. What's more important is that people on the outside know exactly what they see on the inside. You might not know anything about soccer, but there’s a certain way of playing that we want the national team to bring.”

Asked to describe the style of play, Stewart said:

“Once again, the pride and passion come to mind as important values that we spoke about in meetings. When our players step on the field, we want to make sure that people always see that.”

Asked how important U.S. Latino talent is to the future of the U.S. national team and to his vision of a style of play, Stewart said:

“What I can say is being a dual nationalist, I think it’s really simple, everybody who’s eligible to play for the U.S. national team and falls within those values that we deem important when they step on the field and represent us, they are eligible.

“I don’t look at where they came from and how they got there. It’s more important that they’re eligible, and they have those values and maybe even more importantly the technical ability to perform at a high level.”

On whether he likes the Latin style of play and believes it a formula to success:

“I like the Latin style of play. I think it’s a lot like the Dutch style of play, so it’s very much based on having the ball all the time. But at the same time, in international soccer there are different rules to the game to have success.

“I’m not in place yet to be very specific on the style of play because those are conversations that will be ongoing … Looking at Concacaf and qualifying, we will determine in the near future what that style of play will be.”

Asked about the under-representation of Latino coaches among U.S. Soccer’s Technical Advisors and USSF-licensed coaches, in a nation in which the Hispanics comprise 25 percent of the under-18 population, Stewart said:

“I’m not in place yet, so I have not had time to look at that data.”

• Leading the search and hiring process for the head coach;
• Creating the environment -- both day-to-day and long-term -- for the head coach and the men’s national team to succeed;
• Ensuring that U.S. Soccer’s style of play, team tactical principles, and key qualities are being implemented within the men’s national team;
• Creating a player profile for each position on the field based on the style of play, team tactical principles, and key qualities;
• Working with the head coach to create positional depth charts based on the player profile, accounting for player’s current and potential ability to compete at the highest levels in the world;
• Evaluating and monitoring players coming up through the youth national team programs and ensuring that the best talent is identified and cultivated;
• Communicating and working with the Sport Development Departments to drive technical alignment and integration, including Coaching Education, Player Development, High Performance, Talent Identification and Youth National Teams.

Stewart scored the game-winning goal in the USA’s 2-1 win over Colombia that sent the USA to the second round of a World Cup for the first time since 1930. He was also part of the U.S. team that reached the quarterfinals of the 2002 World Cup.

After playing in the Dutch league from 1988 to 2003, he joined D.C. United and helped it lift the 2004 MLS Cup. Upon returning the Netherlands he served as technical director of VVV, NAC Breda and AZ Alkmaar, before becoming Sporting Director of Philadelphia Union in 2015.

He’ll remain with the Union until moving into the U.S. Soccer position on Aug. 1.