Roger Bennett, one half of the Men in Blazers duo along with Michael Davies, is host of a 12-episode WNYC Studios-produced podcast series, “American Fiasco,” which hit No. 1 on iTunes Podcasts Chart last weekend. The release of “American Fiasco” coincides with the USA failing to reach the 2018 World Cup, but follows the tale of the USA's collapse at the 1998 World Cup. 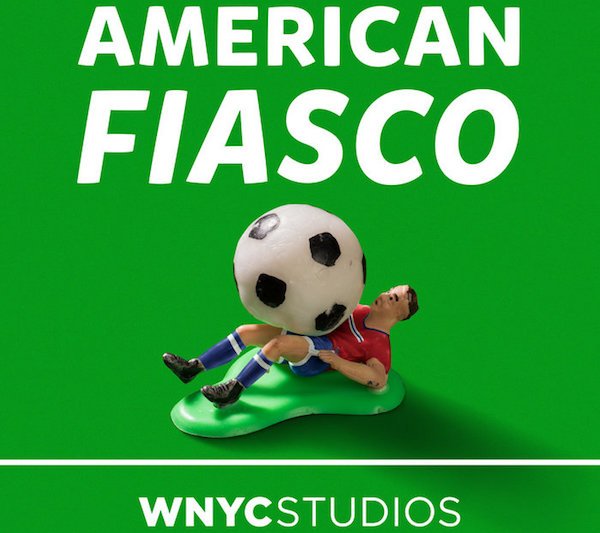 Four years after reaching the second round of the 1994 World Cup, three years after beating Argentina while finishing fourth at the Copa America, and two years after MLS’s launch, the USA lost all three games at France 1998. Guests include Alexi Lalas, Eric Wynalda, Frankie Hejduk, Marcelo Balboa and Steve Sampson. We spoke with Bennett, a native of Liverpool, England, shortly after he became a U.S. citizen.

SOCCER AMERICA: How did you become infatuated with American soccer?

At 1990, they were a blink and you could easily miss it. I watched from Chicago and these guys, ginger of mullet, ginger of beard, kind of scraggly, I watched them stroll onto that field -- that everyone thought that they had no right to be on -- with such swaggering confidence, a collective tenacity, and as an Englishmen I've watched a lot of English teams go down in blazes over the years, and the American team had something I had never seen before, they played with a real joy, they looked happy to be playing soccer, which was unique and remarkable. And I was hooked.

ROGER BENNETT: The first time I saw them against Switzerland [a 1-1 tie in the Group A opener], I fell in love with that team and all they stood for. And in the wake of it I followed the players who moved into the English Premier League, the Bundesliga … Alexi Lalas went to Serie A.

Those players became kind of like the next thing in soccer. Money was pouring in, which was changing the landscape. Soccer players could now have successful careers, financially, playing soccer.

Marcelo Balboa in Episode 1 of the podcast said, "These guys were on $5 per diems before the World Cup. Afterward, they're driving up in Porsches, they're driving jet skis. One of us even bought a horse farm.”

MLS kicked off in 1996, so there was a future for everyone. So, in 1998, America watched the World Cup. They were ready after years and years of not just being disinterested in soccer, but actively hating it. A lot of Americans hated it with so much venom. There's something psychological about it and I explore that in Episode 6 with Big Cat [Dan Katz of Barstool Sports].

So, in 1998, Americans finally tuned in, they were finally willing to give this sport a chance, this team, this next big thing.

We come down and make some noise. We lost to Germany, but they were bloody good. But Iran, Iran! I remember this game. I watched it with Americans who didn't care about soccer but wanted to see Americans open a can of whoop ass on the Iranians.

When I watched that game it stayed with me, it scarred me. These men who had so much to gain from working together, with collective team play just burning a hole in U.S. Soccer. So for the 20th anniversary, I wanted to figure out how we went from a joyous 1994 to 1998, which had infighting and self-destructing individuals. That's really what led me to partner up with WNYC studios. 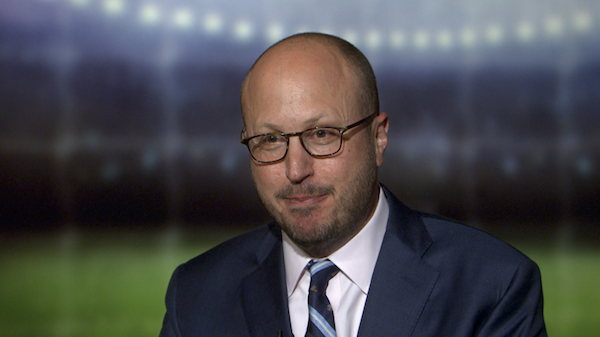 SA: How much was the capitulation of the U.S. team in mainstream pop culture, from what you remember?

ROGER BENNETT: Yeah, it really was. I'm looking at the panic room where we shoot the show, and we have a pennant that says “Soccer: the sport of the '80s. The sport of the future!”

It was always the sport of the future. Alexi Lalas has a story where he was on an airplane and an old woman asked him, "And what do you do young man?" This is Episode 5. And he said: "I'm a soccer player ma'am." And she said: "Yes, but what do you do for money?" and two weeks later he was running out against Switzerland in front of a TV audience of 200 million.

What happened in the wake of that, and we chart this in the podcast, they became American darlings.

They got offers from NFL teams to be kickers, Hollywood movies wanted them, MTV music awards wanted them to host. They became cultural icons. Lalas was playing in Serie A and touring with Hootie and the bloody Blowfish [with his band, the Gypsies].

They were cultural darlings. And just when they had it all, professional footballers and cultural icons, they lit a match, and poured oil on it under the sport of soccer. That's what I wanted to explore with WNYC Studios. How do you get from a collective who knew they had to win by playing together, to a group of guys who just became fractionalized individuals and undermined everything that was good. Ultimately, they sabotaged their own future.

SA: When you talked to players in the tournament, like Alexi Lalas or Eric Wynalda, did they really think that they could win the whole thing?

ROGER BENNETT: Here's something I forgot that many of your readers will remember. After the World Cup, they marched down to the Copa America in 1995 in Uruguay. They opened a can of whoopass on Chile, then they had to face Diego Simeone's Argentina with Diego Maradona watching from the stands. And they slaughtered Argentina by playing aggressive, attacking, in the other team’s box. 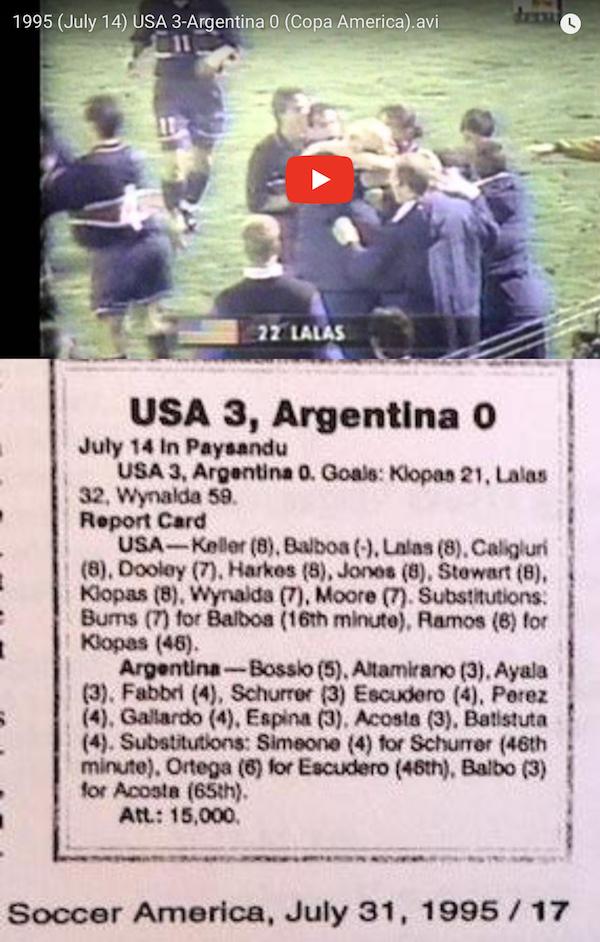 ROGER BENNETT: Yes! That's it. [Former U.S. Soccer Security General] Hank Steinbrecher, whose son is a Navy Seal, said, "You know when we have a war we invade our enemies. We don't fight wars on American soil. In the same way we're going to go on the front foot and we're going to attack and play in the opponent’s box. That's what Americans do.”

And they did it! And they beat Mexico before that [at the 1995 U.S. Cup], and beat them again in the Copa. It sounds delusional to say "We're going to win the World Cup," but I think when they came back from 1995 they couldn't wait for 1998. They were ready, they were like "let's do this." Let's make some noise. They thought they were the dark horse in international soccer in 1995. From then until 1998, there were three years of awful, ill-fated, human decisions after another that pulled the rug out from everyone.

SA: What were some difficulties you found when you were sorting out how to tell this story?

ROGER BENNETT: Everyone we interviewed was incredibly joyous and grabbed the opportunity to reflect on this 20-year-old dormant story. I found it more of an honor and a privilege than anything.

David Regis' story [the Frenchman became a naturalized U.S. citizen through marriage] in Episode 7 is shocking to listen to, to hear how different he is to how he's often held in our minds. A detail being that when the players came into camp, all the players said, "We went at him, we gave it to him hard, we really brought it with two feet, studs-up, to show him that he had no place here.”

I asked him that and he said, "I came from the Bundesliga, I honestly didn't notice a thing." When you're a professional footballer, every practice is life and death and he enjoyed it very much.

Steve Sampson's story was the one most emotionally challenging. He made many decisions, some of them doomed his team before they set foot in France, and regrets none of them. Ultimately, he's a man of value, and often doesn't mean you can be a good manager.

SA: Did some personalities talk about problems that still seem to hurt U.S. Soccer today?

ROGER BENNETT: Yes. We talked about it in the final episode, and the similarities between 1998 and 2018.

Soccer has moved on so much since then, but there's still a sense of not knowing what we know now. Ultimately, there was a wide lens to this journey.

Something that we realized is that there was no one reason that it happened. It wasn’t just Harkes, it wasn't just David Regis, or the 3-6-1 formation. It wasn't one decision.

Locker rooms are fragile cultures. It's like clay on a wheel: once you lose control of it, it just shoots up. It's like how there's no conclusive reason for [USA not qualifying for] 2018, but again, it was a series of decisions that led to that.

There's one interesting thing that all of the players brought up. All of them said that they realized they got so caught up in their own hatred and frustrations and self-interests, that they essentially destroyed soccer. They really hurt their own futures, collectively, the brand of soccer, MLS, U.S. Soccer.

Ultimately a year later, it was the women who bailed them out. U.S. Soccer really took a black eye in the eyes of Americans. In 2019, we may have a similar scenario where the women bail us all out again.

ROGER BENNETT: About America. You guys have an amazing mentality. I say you guys, I guess I should say we guys. And I've lived it, coming to Chicago in 1993 I didn't know anybody.

You put a man on a moon, a Starbucks on every corner of the globe. You believe that when you put your mind to it, anything is possible. What I learned about America, and soccer I guess, is that the American Dream is a very powerful ideal for many, many people. But it does not fly whatsoever in the world of soccer.

There was a sense that all we have to do is put our mind to it and we'll get it done. The American Dream is a compact reality, not a complex reality by any stretch of the means. It sure as heck does not apply, despite the belief of many, in soccer. The world does not care about the American dream.

ROGER BENNETT: It’s a joy to be interviewed by Soccer America. When I first encountered American football culture and American soccer fans in the early 1990s, Soccer America really represented the sport here. It was the one everyone had, and it was really amazing, and it's a real genuine joy to be talking to you.