The last weekend of MLS play before the start of the World Cup produced ties in games between top teams in the Power Rankings and thus little change.

Of teams in the top one-third, only FC Dallas won, and that victory edged FCD up a notch into fourth place. Retaining the top three spots in order were leader Sporting Kansas City, runner-up Atlanta United, and third-place Portland. Crew SC slipped behind FCD into the fifth, the New York teams kept their places in sixth and seventh, and New England held onto eighth. Further down the rankings the only teams to move up were Vancouver, the Galaxy, and Toronto FC.

Only MLS results are factored into the Power Rankings, which included a team’s record in parentheses (W-L-T) and rank last week.

1. SPORTING KC (8-2-5), 1. A gritty goalless game at Providence Park extended SKC’s unbeaten streak to six games. It has lost just once since falling to New York City FC in the season opener and has posted seven shutouts in the last 11 games.
2. ATLANTA UNITED (9-3-3), 2. To those who say the No. 1 USA shirt is no longer his, Brad Guzan retorts, "Not so fast." His nine saves, several of them superb, rescued a point for badly out-played AUFC. A phenomenal cross by Julian Gressel set up Josef Martinez to score his 13th goal with a diving header 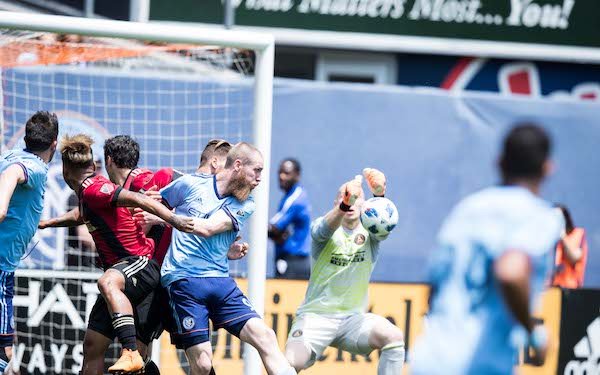