Television cable charges paid and up to date? Check.

List with the eight groups pasted on the refrigerator door? Check.

Invitations out to friends to come over and watch games? Check.

I am ready. Every four years when the World Cup comes around my everyday world ceases to be and like a sunflower that lives to trace the sun in the sky I focus on one thing only: fútbol. For the duration of the tournament I am a passionate fan watching games at all hours, alone and/or with friends, and under all sorts of circumstances: in dorm rooms, restaurants, buses, in remote locations following on crackly car radios, all to be part of the live action.

What is it about the World Cup that arrests me so? What I am chasing every four years? It certainly is not that I myself play the sport and somehow project myself onto the players. Growing up I was hermetically told, “Las niñas no juegan fútbol.” Girls don’t play soccer. And that was that. In El Salvador in the early 1970s nothing around me made the case for the opposite. Even on the streets, those scrawny kids chasing balls were always boys. It is hard to argue for something you cannot imagine. By the time I arrived in the U.S. girls did play soccer -- though my high school did not yet field a girls team -- but by then the point was obsolete and I had found other ways to invest my effort and time.

El Salvador, where I come from, has made it twice to the World Cup: in 1970 and in 1982. On both occasions we fared poorly. We scored Zero goals in Mexico and took nine against us. In 1982 the games were played in Spain and we fared even worse with 13 goals against us (10 of them in one game alone) and only one goal, off Luis Ramirez Zapata’s foot. But no matter, whether El Salvador has played, or not, I have remained a stalwart fan of the event itself. Over the years I’ve come to understand that my fanaticism resides in a very special memory, which happens to be one of my earliest: the final game of the 1970 World Cup played in Mexico where Brazil defeated Italy 4-1. 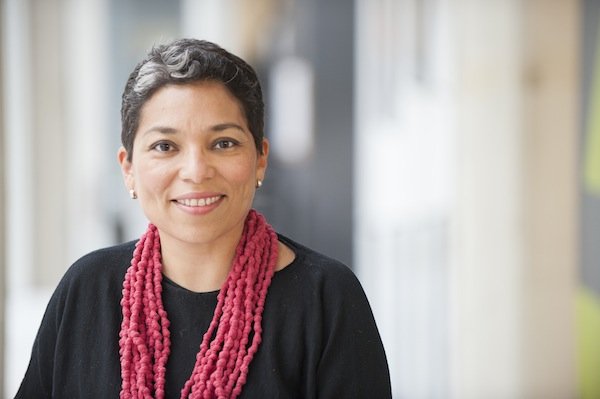 Llegó La Copa! Everywhere there are signs of the World Cup. The white, green and red lines that make up the word “México 70” and the image of Juanito, the tournament’s mascot, stare at me no matter where I look. I see them in the two newspapers papá brings home, in posters advertising beer, drawn on notebooks at school and on television adds.

“Es un honor estar en México” I hear people say over and over, and when they get to “honor,” their chests lift a little. The enthusiasm is contagious. It even conquers papá’s otherwise serious and purposeful ways. Instead of spending time alone reading books and listening to classical music, he has been visiting my Tio Pedro’s house to watch games, keeping up with the scores and even inviting folks to watch the games in our living room. So far El Salvador has lost the two games it has played. “Nos vergiaron,” they beat the shit out of us papà says at the end of the second game against México, “Pero al menos allí estamos.” We live La Copa his smile tells me. We are happy to be there.

It is true that having the national team playing in México is memorable, but there is another equally huge reason why the excitement is so big: Pelé, the world’s best soccer player, is playing in the Brazilian squad. Everyone cheers the lineup of the Equipo Nacional, but more than anything, everyone, cheers Pelé.

As a 4-year-old I am caught in the fervor of the moment but I hardly understand the game. This much I know: two teams kick a black and white ball around a field trying to get the ball into the opposite team’s net. When that happens it is called Gol. Better said that is called Gooooooollllllll!!!! This I also know: el fútbol makes people happy and brings them together. For the four weeks of tournament, El Salvador, Atiquizaya, Barrio el Angel, my home, is in an exuberant mood. Even papá is swept in the excitement and almost forgets that he is supposed to be a serious, taciturn man.

Today at noon is “La Final,” Brazil vs. Italia. We will watch the game next door at Tio Pedro’s house. Tio Pedro and ours are the two households in our block with televisions, but my uncle’s is a color TV and ours only black and white. Papá says the final game should be the best one yet and Pelé will be in it. In preparation for the game, papá washes dozens of mangos he cut earlier from the huge tree that sits, royal, in the middle of our courtyard. Papá washes each mango to remove the sap that sometimes clings to their skin. He is careful not to waste water because we have no running water. Papá collects it every night from the public fountain a block away. Every evening he goes back and forth, back and forth, as many times as is needed to fill the various barrels we use for cooking, bathing, doing laundry and washing dishes.

Mami shouts from the corridor, “Ramón, ya casi es hora!” It is time, the game will soon start, Papá quickly finishes drying mangos, puts some in a basket and heads out the door. Just before he steps out he notices me behind him and asks, “Queres venir?” I nod. I do. Oh how I do want to go with him.

There are already many people in Tío Pedro’s living room when we get there. Many of the adults are my uncles or cousins. I also recognize some of the neighborhood kids packed on the floor. Everyone, except me and Joaquina, my uncle’s wife, who sticks her head in the room now and then, is male. El fútbol is a sport for men and boys. There are no female teams I ever heard of. I never see girls kicking balls in the middle of the streets like boys always do. Even Juanito, the tournament’s mascot, is a boy.

The clapping starts with the first whistle. Every time someone makes a good play the silence in the room is boisterously broken up:

Someone, usually Tío Pedro, settles everyone back down to quiet again. When someone from the Brazilian team scores the room erupts in cheer and applause, everyone stands up at the same time; people in the room next door come rushing in to see the slow motion replay. Only the little ones, like myself, who sit directly in front of the television set, are able hear the very long and very loud “GOOOOOOLLLLLLLL!!!!!!!” of the TV announcer.

Halftime arrives. All of the mangos in the basket are gone. Some men go to the store and buy beers. My father calls me over to where he has been sitting and absentmindedly puts his arm around me. I am overjoyed. My papa is a severe man who seldom offers me any physical affection. But today he smiles and hugs me and says, “Este juego es histórico. Hay que recordarlo” People around us nod enthusiastically in agreement. I will remember I tell myself. The excitement in the room, the applause, the “aaaaay” when it gets dangerous, the avocado green field on the television set, the blue world of the Brazilian flag, this arm around me, hugging, keeping me close.

Papá asks me to go get more mangos. As I run the few meters to my house my long hair trails behind me like a cape. The houses across the street are bathed in bright light. The aquas, oranges and whites of their front walls stand out against the hazy blue of the volcano hovering in the horizon. I know that at this hour birds sing in the mango tree. I know the iguanas drink sun on red tile roofs. And I know, I love fútbol.

Things have of course come a long way since 1970. Just yesterday I attended two games, one for my 12-year-old daughter and one for my 8-year-old son, both of whom played their final spring season games. U.S. high schools now field both, boys and girls soccer teams and there are women who play professional soccer.

Even with all the gains, the status of women in soccer reflects the larger, unfavorable status of women and girls around the world and my draw to World Cup is not doing anything significant to change this reality.

And I wonder how many girls these days are kicking balls in fields in El Salvador, Bolivia or Algeria?

My devotion to the event has to do with reliving, if subliminally, that day all those years ago, when I lived community, togetherness and peaceful celebration in El Salvador. Above all it is about the chimerical pursuit of absolute contentment. It is about the feeling I got one day in 1970 when my father was not himself and his arm, draped around my bony shoulders, told me I was loved.

Claudia Castro Luna is the Washington State Poet Laureate (2018–2020) and served as Seattle’s inaugural Civic Poet (2015-2017). She is the author of the poetry collection Killing Marías (Two Sylvias Press) and the chapbook This City (Floating Bridge Press). Born in El Salvador she came to the United States in 1981. She has an MA in Urban Planning, a teaching certificate and an MFA in Poetry. Her non-fiction has most recently appeared in the anthology This is the Place (Seal Press) Living in English and Spanish, Claudia writes and teaches in Seattle where she gardens and keeps chickens with her husband and their three children. This article first appeared in Soccer America prior to the 2014 World Cup.)