I’m thinking about when I was fortunate enough to spend time with Walter Bahr. 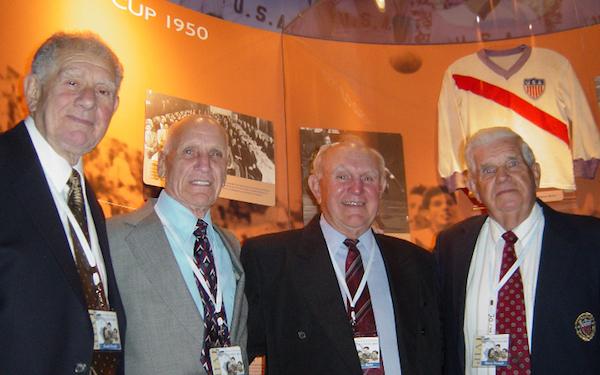 In 2005, I had the pleasure of sitting next to Bahr during an advance media screening of “The Game of their Lives,” about the USA 1950 World Cup team on which Bahr played, which beat England, 1-0, in one of sports’ greatest upset.

Also with us was Sean Wheelock, who plays the role of a young reporter in the movie. Early on, the East Coast players, including the Philadelphian Bahr, face off against a contingent from St. Louis in a tryout game.

Bahr glanced down at the media kit just as a shot flew into the goal. He looked back up to the screen and asked, “Who scored?”

Wheelock answered: “You did!”

In real life, Bahr scored in a 5-2 win over Cuba that qualified the USA for the World Cup in 1950 in Brazil, where Bahr set up the goal by Joe Gaetjens that beat England in Belo Horizonte.

It was in 1989 when it really sunk in how famous that feat had been. I was covering the U-20 World Cup in Saudi Arabia. The U.S. team, coached by Bob Gansler, finished fourth, having reached the second round thanks to a win over East Germany. The foreign media were enchanted by Bahr, wanting to get his account of the win over England.

An East German reporter, Klaus Feuerherm, asked me to serve as translator for his interview with Bahr, who started with, “Oh, that’s ancient history.” And then, as he was always apt to do, talked about his teammates rather than himself. He also tried to steer the focus toward the young Americans -- Kasey Keller, Chris Henderson, Curt Onalfo, etc. – who were on the way to one of the greatest U.S. performances at a world championship.

My Saudi Arabia trip, at age 24, was one of my first journeys abroad as a soccer reporter. Only Soccer America sent a staff member to cover the event, which was fascinating on many levels. The culture, the excellent soccer. The USSR’s Oleg Salenko was the leading scorer, five years before winning the Golden Shoe at the 1994 World Cup. Portugal won the tournament with players who would become part what that nation’s Golden Generation. Argentina had Diego Simeone, Brazil had Leonardo – and Pele showed up for the award ceremony at which Keller, the U.S. goalkeeper, won the Silver Ball.

But I don’t exaggerate when I say that hanging out with Walter Bahr brings back the fondest memories. If you knew Walter, you can imagine how delightful it would be to explore Jeddah and Taif with him. If you didn’t know him, imagine a man who treated everyone, whether it was the mayor -- and we got to meet many dignitaries on the trip – the bus boy, or a miswak street vendor with equal respect, courtesy and good humor.

It was in Taif, where I, Bahr, Dan Bugna (the team administrator) and a British TV consultant explored the city -- testing out the miswaks, the teeth-cleaning twigs that Bahr bought for us. We checked out various shops, and Bahr handed out USSF patches, which were received like precious gifts.

The first time I spoke with Bahr was in November 1985 and I was rather embarrassed about the circumstances – but so relieved that he answered the phone. Because I was in a jam.

Bahr was Penn State head coach from 1974 to 1987. Soccer America was a weekly print magazine back then and we used scores of stringers for our extensive college coverage — this in the years between the NASL’s demise and the 1996 launch of MLS.

In one of its 12 NCAA playoff appearances under Bahr, Penn State had beaten Temple, on penalty kicks, after a 5-5 tie. Because of a snafu -- the Fedex package that we received somehow contained legal documents intended for on Oakland law firm, not the typed story from our correspondent Dan Sernoffsky -- we did not receive the game report on the most spectacular game of the season.

I had to explain that to Coach Bahr -- and write the story myself a few hours before we had to send the pages to the printer. No problem. Bahr described the game, peppered with praise for the opponent, and we met the deadline just in time. 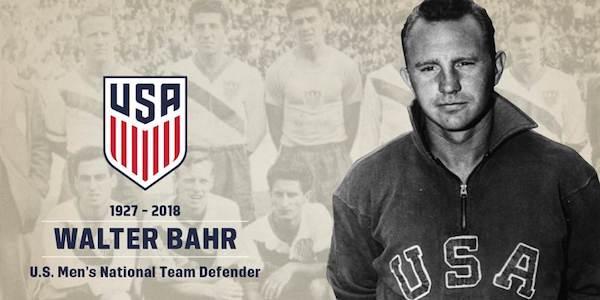 Bahr was captain of the USA’s 1948 Olympic team, which trained on the ship en route to England, where they played a few games before the single-elimination tournament. When the USA’s first opponent pulled out, they had to play two-time World Cup champion and defending Olympic gold medalist Italy, and lost, 9-0.

No one, of course, would give the USA much of a chance of doing anything impressive at the 1950 World Cup. In Tony Cirino’s American soccer history book, “U.S. Soccer vs. the World,” he describes Bahr as being “unofficially in charge” of preparations.

“I was no leader,” Bahr told Cirino. “It just happened by accident that I was sometimes directing practice.”

Nothing that wasn’t humble ever seemed to come from Bahr.

When Bahr was prodded to speak about the 1950 World Cup, he liked to remind us about the USA’s first game, which revealed that the team had great potential: It led Spain, which would go on to finish fourth, on a 17th-minute goal until with nine minutes left the Spaniards struck three times for a 3-1 win.

Bahr was a middle-school teacher when he played on the USA team that beat England. When the USA finally returned to the World Cup in 1990, after a 40-year absence, Bahr would frequently be contacted by reporters to reflect on the 1950 World Cup. 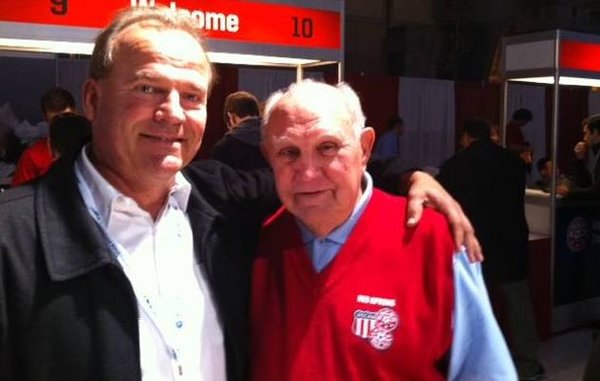 After he retired from coaching, Bahr served as an ambassador for U.S. Soccer, heading the delegation of national team trips around the world. He was also a fixture at the annual NSCAA (now United Soccer Coaches) Conventions, part of the so-called red-apron gang who would greet attendees upon arrival.

That’s how I got to spend a little more time with Bahr every year. I was one of thousands who over the years would be fortunate enough to be welcomed by this friendly, humble, hero of the U.S. game. A man who made us all feel like we were part of something special -- the American soccer community.