Like many Brazilian boys his age, Brazil coach Tite  first experienced the thrills of international soccer through the radio during the 1970 World Cup at age 9. Growing up in a family with humble means, they had no TV, but his family still swarmed around the radio to listen to the World Cup games. 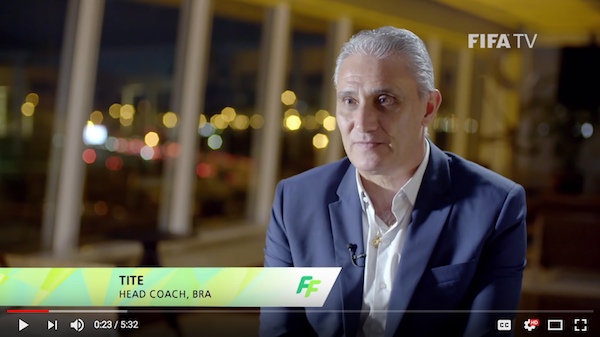 “It was like the matches were a dramatic story being told to us ... like a painting or a great novel,” he said in his letter to Brazil in The Player’s Tribune.

• THE NICKNAME: Tite's full name is Adenor Leonardo Bacchi and he was known as Ade until he arrived at Caxias in 1978 and captain Luiz Felipe Scolari started calling him Tite. Scolari as coach guided Brazil to its 2002 World Cup crown, and was in charge during the unsuccessful 2014 World Cup.
* * * * * * * * * *

After seven knee surgeries by the age of 27, Tite called it quits on his playing career. But he was still passionate for the game, so he went into coaching.

After bouncing around small Brazilian clubs in the early 1990s, Tite made waves when he beat Ronaldinho’s Gremio 3-0 on aggregate to bring Caxias, the club at which he started his playing career, the Rio Grande do Sul state tournament title. It’s a title rarely one by any team besides Internacional or Gremio.

The impressive string of results at Caxias led Gremio to sign Tite as coach in 2001, and in the same year won Gremio the Copa Do Brasil -- the Brazilian equivalent of the FA Cup.

Following stints at Atlético Mineiro, Palmeiras, Corinthians, and Internacional, Tite was approached by United Arab Emirates club Al Wahda and took its offer in early 2010. It was his second coaching stint outside of Brazil after managing Al Ain in the UAE for a year in 2007.

Tite had only spent a few months at Al Wahda before Corinthians came knocking again. An offer from one of the biggest clubs in Brazil was hard to turn down, so he returned.

But in the first few months he failed to qualify for the Copa Libertadores, the most prestigious club competition in South America. He thought he had lost his job as soon as he had been hired.

He justified Corinthians’ decision to keep him after winning them the Copa Libertadores the very next year. The win qualified it for the FIFA Club World Cup, which they also won against, Rafa Benitez’s Chelsea.

Crushed to not be hired by Brazil after its abysmal loss to Germany in the World Cup -- the Brazilian federation went with Dunga --  Tite decided to learn more about the modern game. He took a sabbatical year in 2014, studying alongside Carlo Ancelotti at Real Madrid; he also visited Arsenal and Boca Juniors. He returned to Corinthians the following year and won Brazil’s Campeonato Serie A after the best campaign in the history of the tournament.

“For an individual it’s a huge achievement,” Tite said in a FIFA.com interview. “There’s no point in being falsely modest about it. I’ve evolved and grown throughout my entire career, and there became a time where managing the Brazilian national team became my ambition. Now, my time has come.”

Before his debut against Ecuador in World Cup qualifying, with Brazil in sixth place, Tite showed his team a clip of an NBA finals game between the Cleveland Cavaliers and the Golden State Warriors. LeBron James passed Kyrie Irving the ball, only to see Irving miss the shot. Instead of giving up, James fought for the rebound and passed it again to Irving, who drained the shot.

“This is the kind of atmosphere we need here to be successful,” Tite told his players. “Everyone fighting for one another, even the stars.”

In a team like Brazil loaded with superstars, managing personalities -- especially when one has so little time with them -- can often be the biggest deterrent to team chemistry. Brazil ended up beating Ecuador 3-0, sparking an incredible run of form.

Brazil finished the 10-team, 18-game qualifying competition in first place, with the most goals scored (41 for an average of 2.28 per game), fewest goals conceded (11) and fewest yellow cards.

“Tite arrived and made adjustments,” said Neymar. "The players are not really different -- it's the way of playing.”

Tite has been credited with rejuvenating Brazil after its debacle on home soil, the fourth-place finish after a 7-1 loss to Germany in the semifinals. Before traveling to Russia, Brazil had outscored opponents 47-5 in its last two years and had only lost once – 1-0 friendly defeat against Argentina Australia last summer -- in its last 21 games.

Regardless, only an appearance in the World Cup final would prove acceptable for many of Selecao’s fans. He knows it, too:

“There is a lot of pressure when we play because the world of soccer is looking at us," said Tite. 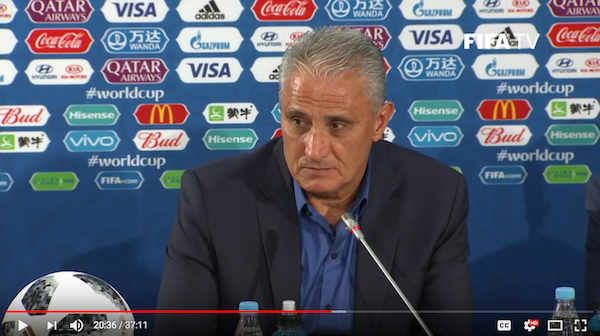 The 57-year-old Tite’s rich experience in the Brazilian game has given him the tools to inspire confidence from his players while earning their respect, too.

For the past three World Cups he has kept thorough notes on tactics for every match -- his wife thinks he’s crazy for it but that’s just how he operates. He has been credited with introducing a balanced, while skillful and enjoyable style to an often times overly attacking or overly defensive Brazil squad.

Brazil's captain Marcelo said, one year into Tite's tenure: "I would kill for him."

“Our teacher has changed the face of the national team,” said Marcelo. “He breaks everything down for us and makes our job easier.”

At a World Cup that has seen defending champion Germany open with a loss, and Argentina and Spain settle for ties, Brazil failed to get out the gate with a win, tying Switzerland, 1-1, despite a 20-6 advantage in shots.

"This will serve as a lesson, we have to be a bit cooler and more precise," said Tite. “This team can produce more.”