Denis Cheryshev  has already scored more goals at the World Cup than he did for his club in the 2017-18 season. The 27-year-old is second behind Cristiano Ronaldo  in the Golden Boot race with three goals -- all excellent strikes -- in wins against Saudi Arabia (5-0) and Egypt (3-1).

For Villarreal last season, he scored twice in Spain's La Liga, where he has spent his entire pro career.

He had not scored a goal for Russia before the World Cup. 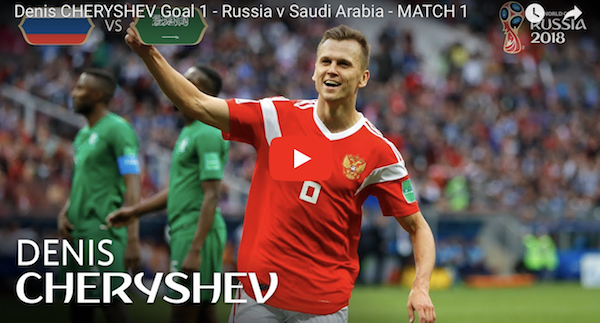 Cheryshev's father Dmitri, a native of Gorky who made 10 appearances for Russia in the 1990s, moved to Spain to play for Sporting Gijon when Denis was 6. After playing in the youth programs of Sporting Gijon and Burgos, Dmitri's second club, Denis joined Real Madrid's youth academy at age 12.

First-team action at Real Madrid was limited for Cheryshev, who become infamous playing in a 2015 Copa del Rey game -- scoring in a 3-1 win over Cadiz when he should have been serving a yellow-card suspension. It resulted in the disqualification of Real Madrid and ultimately the firing of Coach Rafa Benitez.

Cheryshev debuted for Russia under Coach Fabio Capello in a 2012 friendly in Krasnodar against the USA in which goals by Michael Bradley and Mix Diskerud (in stoppage time) earned the USA a 2-2 tie.

Going into the World Cup his country his hosting, Cheryshev played 11 times for Russia and without scoring. He was on the provisional 2014 World Cup but didn't make the cut. He was injured before Euro 2016. But he struck twice in the World Cup opener and once against Egypt in wins that ended fears that Russia would become only the second host nation in 21 World Cups, after South Africa, not to reach the second round.

Russia had entered the tournament as lowest in the FIFA Rankings, at 70th. It had the benefit of drawing the second lowest ranked Saudi Arabia (67) and No. 45, Egypt.

But Cheryshev's goals were impressive regardless of opponent -- matching the spectacular of Ronaldo's strikes.

Cheryshev wasn't even a first-choice attacker going into the World Cup, but entered the opening game in the 24th minute to replace injured Alan Dzagoev and scored his first goal 19 minutes later.

"I could never have dreamed of anything like this," he said.

Russia faces Uruguay on Monday in its final Group A game with both teams already ensured passage to knockout-stage, where we'll see if this surprise Golden Boot hopeful's dream continues.