The Bruce Arena Book: Why it's worth reading despite the T&T ending

The Bruce Arena  book is so good it’d be ripe for a screenplay, if only it had a Hollywood ending. 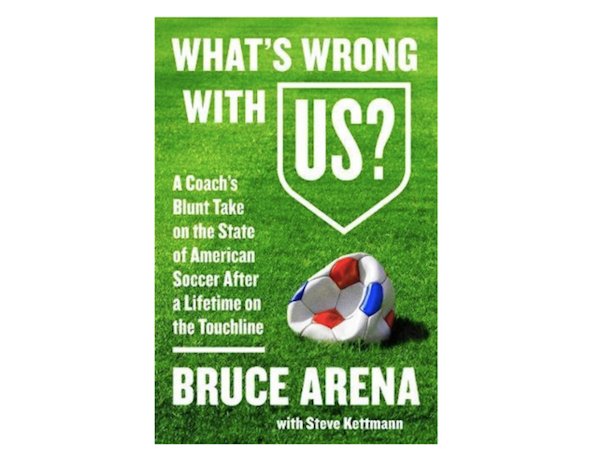 TriStar Pictures turned the strikeout by Bernard Malamud's Roy Hobbs into a Robert Redford home run in “The Natural.” But the Arena book, the entertaining and informative memoir from America’s greatest soccer coach, is non-fiction.

There’s no changing the fact that when Arena was employed belatedly to clean up the mess that Jurgen Klinsmann had made of the U.S. national team, Arena came up short.

After Klinsmann had put the USA behind the eight ball with the first home World Cup qualifying loss to Mexico since 1972 and a 4-0 pummeling by Costa Rica, Arena presided over a 6-0 rout over Honduras in his first qualifier at the helm, a remarkable 1-1 tie with Mexico at Azteca, and a 4-0 beating of Panama. Arena also guided the USA to the 2017 Gold Cup title (a record third time he won that title).

But then came the 2-0 loss to Costa Rica and collapse at Trinidad & Tobago, a 2-1 loss, which started with a fluke own goal. And even the defeat wouldn’t have been enough to keep the USA out of the World Cup, if this didn’t happen:

Comeback wins by Honduras over Mexico (3-2) and Panama over Costa Rica (2-1). The ball never crossed the line on one of Panama’s goals. Honduras equalized when the ball bounced off the back of Mexico goalkeeper Guillermo Ochoa’s head.

To Arena’s credit, right after the game, and in his book, “What’s Wrong With US,” he takes responsibility for the failure. (Something we hadn’t seen in six years of Klinsmann, who always found somebody or something else to blame.)

The plan, obviously, had been that the Arena book would hit the stands as he was about to take the USA to Russia for the World Cup. The failure required a new title and slapped on was the subtitle of: “A Coach’s Blunt Take on the State of American Soccer After a Lifetime on the Touchline.”

Sometimes you shouldn’t judge a book by its cover and this is such a case. Only a sliver of the book, the final pages, are Arena’s proposals on how the American game can improve.

The book is mainly about the most fascinating era of American soccer, told by one of the game’s most intriguing characters, and yes, perhaps it needs reminding – because the 2018 World Cup qualifying failure was such a heavy blow – the USA's most successful coach.

Before Arena coached the USA to its best World Cup performance of the modern era, a quarterfinal run at the 2002 World Cup, he had won two MLS Cups and two international crowns with D.C. United in three seasons. Before that, at the University of Virginia, he revolutionized the college game by creating the most successful, entertaining, sophisticated team of a quality unmatched by any college coach not dependent on foreign players. UVA won five NCAA titles, including four in a row.

Before getting called back by U.S. Soccer in 2016, he won three more MLS Cups with the Los Angeles Galaxy -– giving a him record total of five MLS crowns.

We also get Arena’s account of his encounters with a wide range of other people, from inside the soccer world, such as Gordon Bradley, Shep Messing, Bob Rigby, Don Garber, and outside it, such as George W. Bush, Barack Obama, Tom Cruise –- and the ACC basketball coaches he used to eavesdrop on thanks to his UVA soccer office being next to the visitors’ locker room: Dean Smith, Jim Valvano, Lefty Driesell, Mike Krzyzewski and Bobby Cremins.

“What’s Wrong With US” is co-written by the skilled journalist and author Steve Kettmann, whose several books include “Baseball Maverick: How Sandy Alderson Revolutionized Baseball and Revived the Mets,” and he also co-authored "What a Party!" with current Virginia Governor Terry McAuliffe. Kettmann’s influence is that Arena’s story is told in a most engaging manner, doing justice to what Arena is like in person -- a straight-forward New Yorker with a healthy sense of humor, who cares deeply about the players he has so often helped reach great heights.

The cloud of not qualifying for the 2018 World Cup does not diminish the book's value as a history of American soccer -- its remarkable rise, the challenges it has overcome and those it continues to struggle with. Much of Arena’s own experience is intertwined and he has unequivocally been one of the sport's most important trailblazers.

Arena is the son of an Italian-American butcher who grew up on Long Island. His sports ambitions were first focused on wrestling and lacrosse until he joined the high school soccer team on a lark and ended up replacing a red-carded goalkeeper – and did quite well. Arena went on to play both professional lacrosse and soccer (he was drafted by the Cosmos but ended up in the American Soccer League).

His brief time as a player with the U.S. national team came during a trip to Israel during the Yom Kippur War cease-fire, one of the book's many highlights that reveal parts Arena’s career few would be familiar with. Who knew Arena had stints as a math teacher -- one of his students was Carl Sagan’s son -- typing instructor, bartender, sociotherapist, and high school truant officer?

If the soccer fan still stung by the USA’s World Cup absence may be hard to convince that this is a worthwhile read, the class of reader that it will certainly appeal to is the coach. Arena’s accounts of the coaches who influenced him, the descriptions of his own relationships with players, and his successes and failures, make “What’s Wrong With US” more instructive and insightful than any Xs and Os how-to book you’ll find on the shelves.

What's Wrong with US?: A Coach’s Blunt Take on the State of American Soccer After a Lifetime on the Touchline by Bruce Arena with Steve Kettmann (2018 HarperCollinsPublishers) 268 pages. Available in hardcover ($18.00), Kindle, and Audio.

bruce arena, men's national team, mls
14 comments about "The Bruce Arena Book: Why it's worth reading despite the T&T ending".
Read more comments >
Next story loading