Reffing at the younger ages: Kids say the darndest things

Soccer Americans might recall in my last article, that I felt a twinge in my right knee while running down a field as I was refereeing back in May. My Primary Care Physician referred me to an orthopedist in sports medicine who diagnosed a slight tear in my medial meniscus. And since everything else about my leg is really good, including no arthritis, he said that I could gradually go back to running and refereeing and see how I feel, and I did so with the Exous knee brace on my leg. 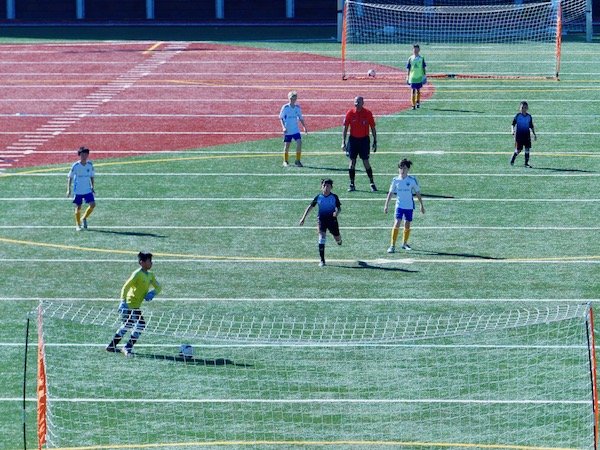 I made sure that everything is being taken very slowly in the recovery process so I was assigned U-9 games, both boys and girls, on small-sided fields. I have not done too many games in this age group and found out that Art Linkletter was right as “Kids say the darndest things.”

Take the boys U-9 game where a player was tripped, grabbed his leg and did not get up. This occurred just inside the touchline on the spectator side. One of his teammates ran up to him and said, “Jeffrey, how many fingers am I holding up?”

A mother pointed out to him, “David, he has a leg injury, not a head injury.”

What I also discovered is when a player went down to the ground injured and I asked him or her if the coach was needed, the kid’s mother had by then run on to the field to attend to the injured player, often with any other of her children right behind.

With older players, they generally know whose throw-in it should be so if the ref is unsure, wait a split second and the players’ reactions will often tell you. Not so with U-8 and U-9 players so when unsure, the ref should point in one direction and simply get on with the game.

Don’t be surprised to see kids react based on what opponents do. For example, the keeper saved the ball before it went over the goal line, and right near me, inside the penalty area, an attacker yelled, “Goal!”

The keeper, hearing that a goal had been scored, threw the ball toward me. Rather than declaring the ball was live, which it actually was, I blew my whistle and had him take a goal kick and the opponents retreated behind the build-out line, even if that was not the way to restart play in any other way than possibly Law 18 (common sense).

I learned that a little extra clarification is often needed. So when the ball went off the defender over the goal line and I pointed to the corner and said, “Corner kick,” one of the little guys asked, “For which team?”

In these games, the ref can be more of a teacher than an enforcer and I tried to emulate Willy Wonka (the Gene Wilder version). As I have found out time and time again, that song lyric can be very true, “When you’re smiling, the whole world smiles with you.”

I must have done OK as there was very little dissent, the games were rather disciplined for these divisions and a parent went out of his way to shake my hand and say, “You did a really good job with this age group.”

This article might end here but there’s a Part 2 to follow in a few days as I would be remiss if I did not write about the very dark cloud hanging over some small-sided games and what the ref could do to try and make that cloud not as dark.