One of biggest issues in American soccer is whether MLS clubs are providing young American players enough opportunities. The Seattle Sounders boast one of MLS’s most ambitious youth programs and are using their USL team, Sounders FC 2, as a bridge to the first team. Nine teenagers saw action in S2’s USL season opener, including two 16-year-olds and Ray Serrano, 15 years old when the 2018 season kicked off. We spoke with S2 coach John Hutchinson, who took the S2 head coaching helm after serving as assistant in 2017.

SOCCER AMERICA: What’s S2’s relationship like with the Sounders’ Development Academy teams and the first team?

JOHN HUTCHINSON: I think we've got one of the best academies in the country, at least in terms of player development and results, so far. We're seeing younger players getting into S2 and for me, I like it because what we're about is developing players for the next level.

I've got to give a lot of credit to the first team here. They're willing to give these players the chance to train and pit them against the pros. It's great seeing the young players train with them because it furthers their development quicker.

The speed of the game is much quicker, the thought process has to be much quicker. When you see the interaction between the first team, S2 players and the academy, it's a wonderful thing.

Having 15-, 16-year-olds train with guys like Clint Dempsey, Nicolas Lodeiro, Jordan Morris and Osvaldo Alonso -- it's really good for them.

SA: How are the academy teams linked to S2?

JOHN HUTCHINSON: We do double sessions once a week with S2 coaches and S2 players with academy coaches and academy players.

We get the best players from the academy and bring them all together and we split up into small groups and we train, and have 10-12 coaches on the field. It's an amazing thing to watch. All of these things are coming together nice and slowly. The pathway we have now is a big improvement from what it was in the past.

We see them in the academy and try to implement them into our system, give them some time to adjust and educate them on and off the field. Having them practice with the first team sometimes is great.

SA: Any other young players you feel have great potential?

JOHN HUTCHINSON: One of the guys I'm most excited about is Sam Rogers. Local boy, 19 years old, incredible talent. He's trained with the first team and is just going to get better and better as we go along. We're excited about his future here.

SA: How are youth players adjusting to USL play from academy play?

JOHN HUTCHINSON: It's an amazing challenge for them. You've got to put them out there even if they're not ready.

In the first game of the season, we brought up Ray Serrano, who hadn't played a game for S2 to train with us before the game.

Our belief up and down the levels of the club is that it doesn't matter how old they are. They're good enough, so we're going to throw them out there and see how they handle the expectations and experience.

They're not going to get it right all the time. The players knocking on the first team are the ones who are putting in steady performances.

We had Marlon Vargas come in and start a game, he played a good 60 minutes. He didn't start the next game but we expect that, it's all a part of the plan. We'll put him back out there again and put him in sticky situations. We started him in Phoenix, a 17-year-old starting, Didier Drogba's out there and everything. It's a great experience. Developing talent is also about “we.” It's a we mentality and I think we'll improve on that mentality as the season goes on. 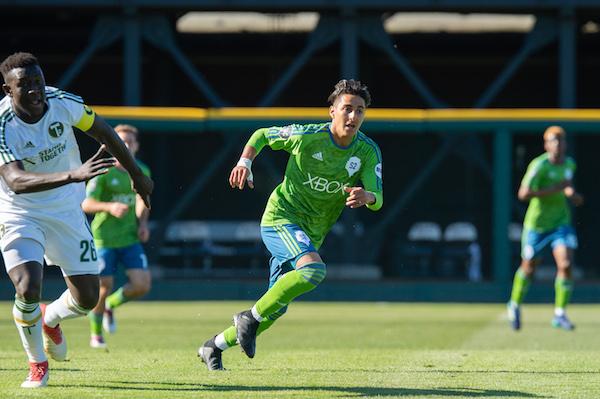 SA: Vargas recently scored a hat trick at the U.S. Soccer Development Academy playoffs. What kind of player is he?

JOHN HUTCHINSON: We nicknamed him the Wizard. He's a little light at the moment but we don't really worry about that yet. We don't look at a player's height, weight, or ability; we look at his ability on and off the ball.

I actually traveled to Seattle before I got the job here and we were with Marc Nicholls [Sounders Director of Player Development and Academy Director] watching an academy game. Marlon came off, Marc gave him a bit of a rev-up, he brought him back on, and Marlon walked out and scored a hat trick.

And I said to Marc Nicholls: Who's that kid? And he said: Marlon Vargas. And I said: Oh OK, cool. I went home to Australia and came back six months later to become assistant coach at S2.

We watched Marlon play, we signed him, and we threw him out there in the first game, playing at the No. 10, an important position for our team. Of course, we can't claim all rights to his development, because he came through the academy with Chris Little, Mike Morris. I've watched him grow at the Sounders academy and the coaches here and the facilities they have can produce more players like him.

He's a wonderful talent, but there's plenty more of them. We have about 10-12 players we have our eye on to develop in the next year or so. We get a hold of them in a professional environment, they train with the first team. The pathways become much clearer for these players. I do think we'll see a lot of academy players coming through into the first team within the next two to three years.

There's quality coming from the academy, and we try to harness that. That's what S2's about -- harnessing that talent, improving it and them as professionals on a full-time basis.

SA: What’s the balance with S2 between getting results and player development?

JOHN HUTCHINSON: We try and develop a winning mentality first and foremost. You need to get results and win games. We usually treat the performance more important than the result. The academy is doing a good job in getting players through the system, and then we've got the job of instilling that winning mentality.

We travel to places like Vegas, Salt Lake, Phoenix, and we always get good games there in terms of development itself but again, it forces us to try and be a bit more deceptive.

Can we keep a clean sheet? Can we keep the ball? Our players understand that winning does matter. We've had some good performances this year where we've lost, and one time we had a bad performance but we won. We've got a bunch of young players, but that doesn't mean you can lose the game. We're slowly getting there and we'll hopefully get closer to where we want to be as the season winds down away from home.

Sometimes we play in areas where we probably shouldn't, but we try to teach them to keep the ball, move it, understand what it means to have the ball at your feet and play.

It's been up and down in terms of results. In terms of development and the players coming through the system, I think it's going really well.

SA: In his new book, “What’s Wrong With US,” Bruce Arena complains that MLS teams don’t give Americans’ enough playing time. What do you think?

JOHN HUTCHINSON: Well, I think it could become a problem. I know here at the Seattle Sounders the young American talent we have is incredible. The whole club is on board and we make sure we get the best out of them. And then when they're ready, they play.

If you look at our first team there are three wonderful American talents on that team. We know the first team is comfortable playing young players, so our job is to develop them into pros and get them ready to play at the next level. When they go into the first team, the winning mentality is already ingrained in them.

JOHN HUTCHINSON
Born in Mullwall, Australia, Hutchinson played pro ball in 1996-2015, starting out with the Gippsland Falcons and spending the last decade of his playing career, besides a loan stint with China's Chengdu Blades, with the A-League's Central Coast Mariners, for whom the central midfielder made a club record 268 appearances. Of Maltese decent through his grandmother, he was capped 11 times by Malta, debuting in a 2010 World Cup qualifier against Zlatan Ibrahimovic's Sweden. He started coaching with the Mariners before joining the Seattle Sounders' staff in 2017. 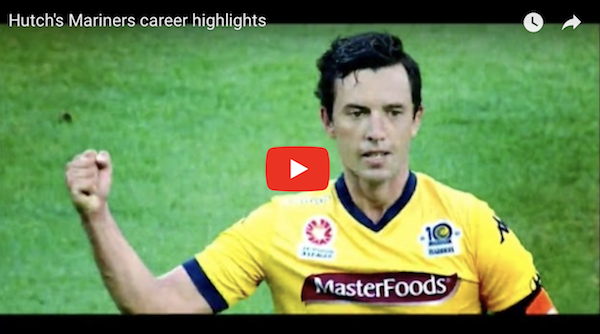 SA: Mexico has reintroduced a rule requiring a minimum amount of cumulative minutes for young players (21 and under) over the Liga MX season. Do you think MLS should adopt something similar to incentivize youth development?

JOHN HUTCHINSON: Yeah, I think it's important to have the local players playing minutes and get game time or else the American game stagnates and American players suffer because of it.

Coming from Australia, we kind of had the same problem. We had foreigners coming in, and they were better than the locals. I can only speak for the Sounders, but Marc Nicholls and I never had an S2 player sitting on the bench for three, four, or five games in a row. The young ones especially. We make sure their game minutes are up and manage their training loads and make sure they can manage.

Up and down the academy, players' minutes are logged. We always want everyone improving by getting minutes and not sitting on the bench for three games in a row. Players need to play. You can train for however much you want, but until you're out there in the heat of battle, that's the real test.

SA: You’ve got players from all over the West Coast, and Hawaii. What’s the scouting strategy?

JOHN HUTCHINSON: We have a scouting network through our club run by Chris Henderson, Sean Henderson and Henry [Brauner]. They run the scouting for us. We search for the players all the time. When we're playing other teams, whenever we're watching games we're looking for talented players. The network is great, but everyone plays their part. When we play an S2 game, we look for players. All Sounders coaches always know that they're on the lookout for talent. The first thing we tell S2 players when we sign them is that we're looking for players better than them now. It's a good system we have here and we're going to continue to improve it.