Criticism of Lionel Messi has become harsh, but how much of it is warranted, and what’s off base?

"He must be bored, tired or disgusted, he gives everything for Barcelona but doesn't for Argentina.”

The problem, of course, is that while Messi has won nine La Liga titles and five UEFA Champions League crowns with Barcelona, he hasn’t led Argentina to a World Cup title.

But the notion that Messi hasn’t been committed to his national team is absurd.

Here’s a few things to remember:

• Messi saved Argentina’s 2018 World Cup qualifying campaign. Entering the final game of the marathon South American qualifying campaign, the world’s most arduous and competitive path to the World Cup, in sixth-place, La Albiceleste conceded a goal after 40 seconds at Ecuador in high altitude Quito. Messi scored a hat trick and Argentina booked a ticket to Russia.

• It was thanks to Messi that Argentina reached the 2014 World Cup final. He scored the winning goals against Bosnia & Herzegovina and Iran (in the last minute) in group play and struck twice in a 3-2 win over Nigeria. Argentina, weakened by injuries to Angel Di Maria and Sergio Aguero, fell in the final to Germany, 1-0, on an overtime goal.

• In qualifying play for the 2014 World Cup, Messi played in 14 of the 16 qualifiers, matched only by goalkeeper Sergio Romero, and led the team with 10 goals and set up several others.

• He spent the next two summers after the 2014 World Cup playing for Argentina, which fell to Chile in both the 2015 Copa America and 2016 Copa America Centenario finals on penalty kicks.

Three finals in three years, that’s not so shabby for a guy who played 50-plus other games each year for Barcelona.

Messi, so distraught about missing his spot kick against Chile in 2016, temporarily retired from the national team. He came back and scored seven of Argentina’s 19 goals in 2018 World Cup qualifying. That Argentina conceded 16 goals shows how crucial Messi’s goals were.

Argentina’s start to the 2018 World Cup has been woeful, and of course the focus is on Messi, who missed a penalty kick in the 1-1 tie against Iceland. Then came the 3-0 loss to Croatia, which got its first goal on the biggest goalkeeper blunder so far at the tournament -- before Argentina got roasted on counterattacks. 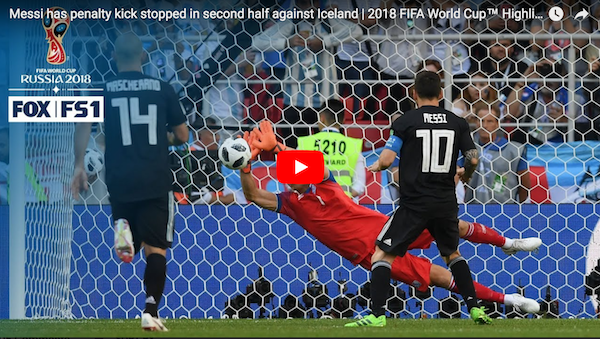 Argentina didn’t enter this World Cup as a favorite, having struggled in qualifying and gotten thumped, 6-1, by Spain in a March friendly while Messi watched while recovering from injury. How much Messi could do to turn Argentina back into the World Cup contender it usually is, was already in question before the tournament.

But simply watching Messi’s reaction to the losses should extinguish any notions that he doesn’t care about his national team.

His distraught figure on the field after the Iceland tie prompted players from both teams to come console him.

The myth is he’s not committed. The reality is Messi is failing as a captain, as a leader. When his teammates witness his reaction after a setback, they infer he’s lost faith the team, in them.

Tying one’s first game at a World Cup doesn’t have to be a big deal. Spain won the 2010 World Cup after losing to Switzerland in its first game.

“I am responsible for what happened,” Messi said after the Iceland game, as if what happened was some kind of disaster.

If Messi felt comfortable as an off-field leader -- and a postgame spokesman for the team -- he would have pulled himself together, shrugged off the setback, and said something like, “We’ll bounce back from this."

He reportedly stayed alone in his hotel room during a team and family barbecue after the Iceland tie.

To advance, Argentina needs to beat Nigeria on Tuesday, and hope that Iceland doesn’t beat Croatia and maintain a better goal difference.

For Argentina to pull that off, Messi's teammates need to take the pressure off Messi. The burden of winning a World Cup for his country has clearly taken its toll.

It's hard not to hope that Messi's teammates do come through. Because it’s a sad to see Messi as such a depressed man when he has brought so much joy, so often to the soccer world with his wonderful talent.