A win by Los Cafeteros on Thursday over Senegal would make Jose Pekerman  Colombia’s most successful coach in history. 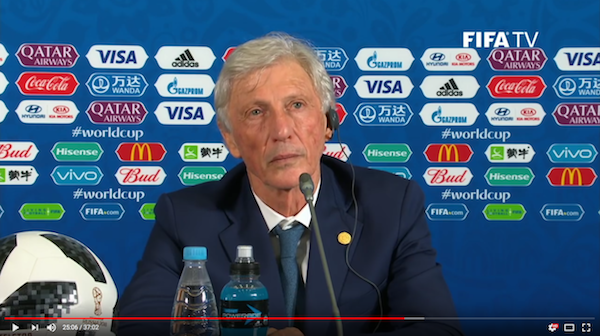 Not that the Argentine Pekerman isn’t already revered in Colombia, whose President, Juan Manuel Santos, granted him citizenship for qualifying the team to the 2014 World Cup, ending a 16-year drought.

But if Colombia reaches the second round in Russia, it will mark the first time it’s done so in successive World Cups.

However sensational the 1990s’ Carlos Valderrama-led Colombia was, it reached the knockout stage only once, a round-of-16 appearance at Italy 1990 before falling in the first round in 1994 and 1998.

“One of the greatest joys of my life,” said Pekerman upon the successful qualifying campaign.

Falcao, who scored nine goals in 2014 qualifying, was injured weeks before the tournament started. But in Falcao’s absence, a new star was born in James Rodriguez, who scored six goals on the way to becoming Colombia’s first World Cup Golden Boot winner as Los Cafeteros reached the quarterfinals.

Pekerman had familiarity with Colombia before taking the coaching job. His professional playing career ended prematurely because of a knee injury while with Independiente Medellin.

He returned to Argentina, and made ends meet as a taxi driver to support his family before he started his career in coaching, at the youth level.

He spent 10 years coaching Argentinos Juniors youth teams, starting in 1982, then spent the next two years with Colo Colo’s youth teams in Chile.

That made him an obvious choice to take the full national team’s helm, but then Argentine federation president Julio Grondona passed on Pekerman, infamously saying that, “Jews don’t like it when it gets rough.”

Pekerman had grown up in Villa Dominguez in the outskirts of Buenos Aires, a popular settlement for Jewish immigrants. His grandparents came to Villa Dominguez from Ukraine.

Grondona’s comment led to charges of anti-semitism by Argentine Jewish associations, Grondona was forced to make a public apology, and finally hired Pekerman in 2004.

Pekerman's Argentina won its group in the 2006 World Cup while playing the tournament's most impressive soccer, but fell to Germany on penalties in the quarterfinals. Pekerman took the loss personally after heavy criticism in Argentina; he resigned after the tournament and made a coaching foray into Mexico for the next few years, first at Club Toluca and then at UANL Tigres in 2007 and 2009, respectively.

Pekerman has been unlucky at World Cups: he’s faced the host nation on both occasions in the knockout rounds (Germany in 2006 and Brazil in 2014).

Coaching at the World Cup in Russia, Pekerman is hailed in Israeli press as the only Jewish participant, he’s one of only five coaches who returned with his team from the 2014 World Cup, and next to 71-year-old Uruguay coach Oscar Washington Tabarez, Pekerman at age 68 is the second oldest coach.

After an early red card derailed his game plan against Japan in the 2018 World Cup opener, a 2-1 loss, his side bounced back in terrific style with a convincing 3-0 win over Poland.

Most impressive was Pekerman’s confidence to start two attacking midfielders, a move often unheard of in today’s modern game. Indeed, Pekerman's team can be depended on to play exciting, attractive soccer.

Pekerman’s tactical prowess complements his players’ skill and grit well, giving Colombians plenty to hope for in the knockout phase of the tournament -- if they get there, of course. Colombia needs a win over Senegal. A tie will only suffice if Japan loses to already eliminated Poland.

“We are not qualified right now," said Pekerman. "We are out of the competition right now, we need to play at an extraordinary level to beat an extremely tough team, a team that is on the up and up, getting better.”