VAR totally fails to seize its chance for glory

If ever there was a tricky soccer situation that was waiting to be solved by VAR, surely it was the problem of goalkeeper movement at penalty kicks.

The difficulty with that is that it requires one person -- the rules give the job to the assistant referee -- to be aware of two actions taking place 12 yards apart at the same instant. Already a difficult assignment, the rules then make it virtually impossible by positioning the AR on the goal line, where -- by looking straight ahead of him he has a clear view of goalkeeper movement, but at best only a slight marginal view, at the fringe of his field of vision, of the penalty kick taker.

The AR is being asked to do the impossible. So a compromise has been adopted by the referee and his AR. The goalkeeper is allowed to take one step forward without being penalized -- simply because the AR -- with probably only one second at his disposal -- cannot hope to judge whether that step forward was made after the kick was taken, as it was taken, or before it was taken.

Like any compromise, it is far from perfect, but it has one over-riding advantage: it is practical, it works. And like all compromises it is open to abuse. Once goalkeepers know they will not be penalized for that first step, their instincts tell them to make the step as early as possible. This they have done, and by and large they get away with it. No call. (No special shame attaches to goalkeepers over this -- it is, I think, part of every player’s nature to push the rules to the limit, and beyond, to find out just how far they can go).

Three major European titles have been won in the past decades by flagrantly illegal goalkeeper movement during shootouts. Not even the defeated teams have protested. The compromise has evolved into a conspiracy of silence.

What was once acceptable has become objectionable. A compromise to make the rules work is now a subterfuge to undermine those rules.

Now arrives VAR, with everything necessary to set things aright. An immediate review of replays showing both kicker and keeper at the exact crucial moment. One can say, with total truth, that for this situation, VAR has rendered the AR totally irrelevant. His viewpoint is not needed now, VAR can quickly do everything.

The game had been a rather grim, frustrating affair. Croatia, capable no doubt of playing the better soccer, rarely managed to do so. Denmark played the spoiler role to perfection and obviously rattled the Croatians. The game lumbered into overtime and with just four minutes left, referee Nestor Pitana of Argentina awarded Croatia a penalty.

Luka Modric stepped up to take the kick -- and Denmark’s goalkeeper, Kasper Schmeichel moved early. But this was too early, too noticeable. Sitting here in New York I was immediately sure this was excessive. Not just me -- I have checked with journalist colleagues watching in England, in Italy, and the USA -- all three tell me that their immediate reaction was the same as mine: Schmeichel had moved way too early.

Schmeichel made the save and was duly praised for being “brilliant.” Neither referee Pitana nor his AR saw anything wrong. No appeal was made to VAR.

The official FIFA “VAR Handbook” specifically refers to “Penalty Kicks and Kicks from the Mark,” stating that “The Referee can initiate a review for an offense by the goalkeeper or kicker which directly affects the outcome of the penalty kick and thus whether a goal is scored. If an offense is clearly identified, the necessary discipline action must also be taken.”

The failure of the VAR to get involved here defies belief. Schmeichel’s movement was so blatant (I’m using that word from the rulebook, which says that the AR must wave his flag “if the goalkeeper blatantly moves off his line before the ball is kicked”) that it didn’t really need any technology to spot it. For once the human eye served very well. (Incidentally, I suspect that the number of people, never mind goalkeepers, who have actually seen a VAR wave his flag on these occasions is minuscule -- I have never seen it, and I watch out for such events).

My feeling that I had seen things correctly from merely watching the live action was confirmed by repeated viewings of the replays -- see below -- which show Schmeichel with both feet off the goal line, his left foot about a yard forward as Modric is about to kick the ball. 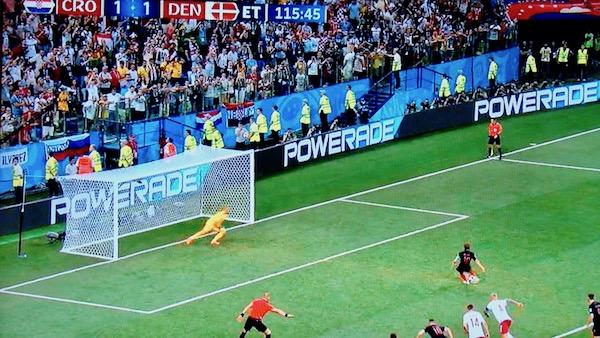 Thus Schmeichel went unpunished -- a “clear and obvious error” by the referee and his AR -- precisely the type of situation that VAR is designed, and is fully equipped, to recognize and to correct. VAR should have been immediately involved here. The penalty kick should have been retaken. Schmeichel, as stipulated in Rule 14, should have been yellow-carded.

VAR was given a wonderful opportunity to shine, to bring long-needed clarity to a murky area. It failed -- abysmally -- to seize the moment.