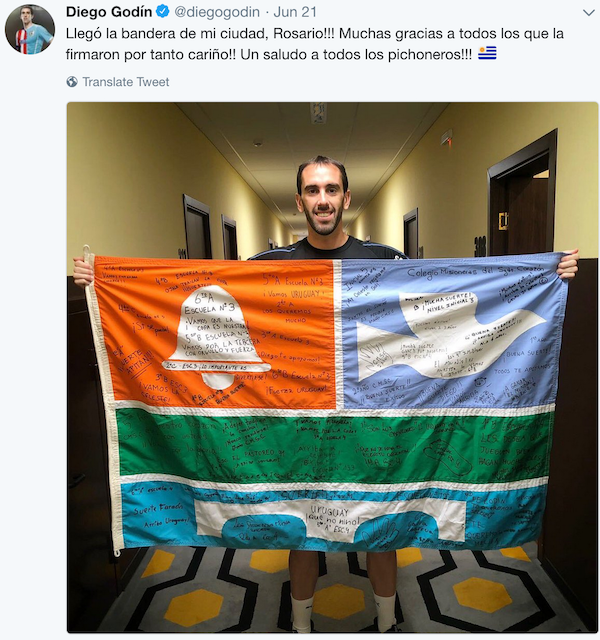 Godin grew up in Rosario, a city of 10,000, and at age 15 moved to the Uruguayan capital of Montevideo to join Defensor’s highly regarded youth academy.

A center forward until age 12, he was an aspiring playmaker, a No. 10, when at age 17 he got cut by Defensor. He decided to quit the sport and return home. But five months later, his uncle arranged a tryout for him with at a smaller Montevideo club, Club Atlético Cerro.

Cerro bought his contract for $25, gave him a spot on its lowest division team, and guided him to a wide midfield position.

Suspensions and injuries led him to fill in a central defender, a role he played so well he was invited to the first team. At age 19, he debuted for Uruguay. Within two years, Godin was captaining Uruguayan powerhouse Nacional.

The skills he had honed playing in the attack as a youth player, his prowess in the air, and superb ability to read the game translated well to the central defensive position. And like all standouts in the Uruguayan league, he moved at young age to Europe, signing with Spain’s Villarreal at age 21.

At Russia 2018, the 6-foot-1 Godin teams up in the central defense with his Atletico Madrid partner, 23-year-old Jose Gimenez. They lead the defense of the only team that got through group play without conceding a goal, before a 2-1 win over Portugal sent La Celeste into a quarterfinal with France, on Friday.

"Diego always steps up – every ball, every play, every game,” said Uruguay coach Oscar Tabarez. “It's difficult to reduce a player to one characteristic, but with Godin I'd say his biggest attribute is his mental strength. He always wants to take on every challenge and come out on top. He represents the best of Uruguay."

In qualifying play, Godin, who now has 121 caps and captains La Celeste, saw more minutes of action in the 18-game campaign than any other Uruguayan field player.

Regardless of how Uruguay finishes in Russia, the world’s richest clubs will aim to pry him away from Atletico Madrid, whose coach, the Argentine Diego Simeone, has said: "I'd never let him leave.”