Vincent Kompany: Belgium's 'Master of the Castle' comes back just in time

Belgium’s golden generation is underachieving no longer, thanks to its leader, Vincent Kompany, who recovered from injury just in time for his team’s toughest games of the 2018 World Cup. 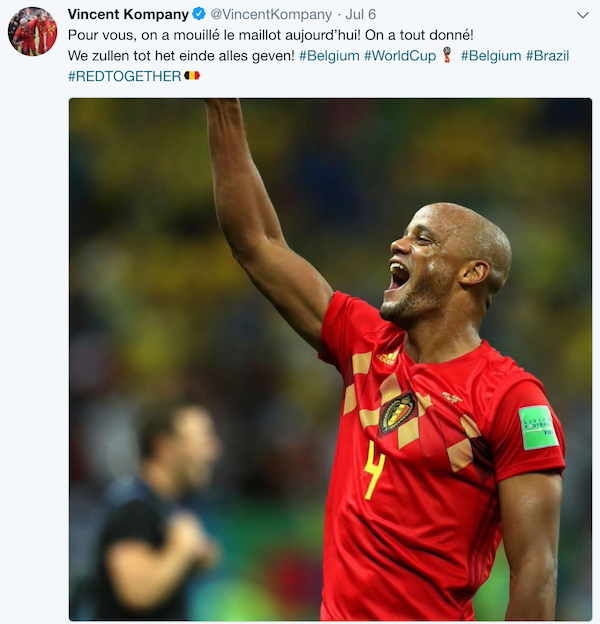 Kompany has spent the last decade at Manchester City, which last season stormed to the English Premier League title, while the Belgian played only half the games because of injuries.

In fact, Kompany has missed 97 games since Dec. 1 of 2014, plagued by a series of injuries including a calf muscle tear, a groin strain, and knee problems.

Every time he comes back, the Sky Blue faithful hope that their battlefield general will return for a full season. And every comeback ends with another setback, only for him to announce that he plans to come back stronger than ever.

At this World Cup, Kompany has been Belgium’s rock. Even when he’s not playing, his locker room presence is vital for Belgium’s star-studded team -- he’s used to being an off-the-field leader because for so many games for City, that’s all he could provide.

Kompany, the 6-foot-3, 185-pound central defender was injured again last January, but recovered to play four months -- his longest healthy stint since his injuries began in 2014.

But he was still questionable on the eve of the World Cup. LAFC defender Laurent Ciman went to Russia on standby but was sent home when Belgium coach Roberto Martinez decided he could eventually count on Kompany.

Thanks to a forgiving group draw, Martinez was able to ease Kompany into the lineup. He came on as late sub in last group game, a 1-0 Belgium win over England, after both teams had already clinched second-round passage, then started the next two games.

And in the knockout stage, Kompany has been his usual self: commanding his teammates, dominant in the air, and a knack for finding a pass after winning the ball back.

After shaking off some rust against Japan, the captain was stellar in the quarterfinal clash against Brazil. It was he who flicked on a corner kick that found its way into the net via the arm of Fernandinho, and his composure in the box allowed his team to retain the ball rather than cough it up to the Brazilians and undergo even more onslaughts.

His goal celebration -- a face contorted with ecstasy, relief, and pride -- reflected the agony he’s endured for both club and country for the last injury-filled years.

Kompany, born to a Congolese father and Belgian mother, is a stalwart of Belgium’s golden generation, the one that’s underachieved for years, the one that’s gone from dark horse to a flop. In addition to the 2016 Euro and 2014 World Cup disappointments, Belgium failed to qualify for the 2012 European Championship and 2010 World Cup.

“Vinny” grew up in Uccle, a municipality just outside of Brussels, speaking Dutch and French, and he's now also fluent in English and German. After the death of his mother Jocelyne in 2008, Kompany took it upon himself to pursue a master’s in business administration at the Manchester Business School after years of other coursework.

In Grant Wahl’s book, “Masters of Modern Soccer,” Kompany describes his role on his team as “master of the castle.” Constantly holding off attacks and starting ones himself, Kompany plays the game like chess, always two steps in front of his opponent.

He also attributed his ball skills to the philosophy of Anderlecht’s youth academy: “We weren’t allowed to kick the ball all the way upfield, so you kind of evolved into the player you needed to be. You took a lot of risk, but that’s what they asked for.”

Belgium faces its toughest test so far in France on Tuesday, and Kompany must be at his best if they’re to stave off the waves of French attacks.