Finals on Tuesday in Kansas City will crown the champions of the 11th U.S. Soccer Development Academy season. In the younger age group, Atlanta United will defend the title it won in 2017 when its team included Andrew Carleton, who's appeared in four MLS games this year. The LA Galaxy, runner-up in the older age group last season, returns to the final again led by Efrain Alvarez, the 16-year-old who scored his eighth goal for the Galaxy's USL team between the DA quarterfinals and semis. 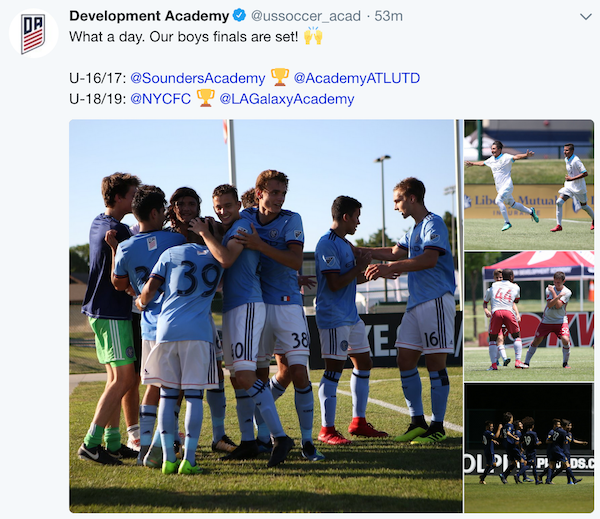 Alvarez scored a late goal in the Galaxy's semifinal win over the Vancouver Whitecaps after 17-year-old Alex Mendez opened the scoring in overtime. The Galaxy will face New York City FC, which beat the Columbus Crew, 1-0, on a goal by Justin Haak.

In the U-16/17 semis, Atlanta United's Jordan Matthews scored a stoppage-time penalty kick after he was fouled to edge the Montreal Impact, 1-0. The Seattle Sounders' 4-1 win over Barca Academy included goals by Marlon Vargas and Alfonso Ocampo Chavez, who also play for Seattle's USL team.

Barca Academy was the only non-MLS club that reached the final four at either age group.