The 11th season of the Boys DA finished with first-time champs at both age groups. New York City FC, fielding a team at the oldest age group for the first time, defeated the LA Galaxy in a penalty kick shootout after a scoreless tie in the final. The Seattle Sounders routed defending champion Atlanta United, 5-1, in the U-16/17 final. 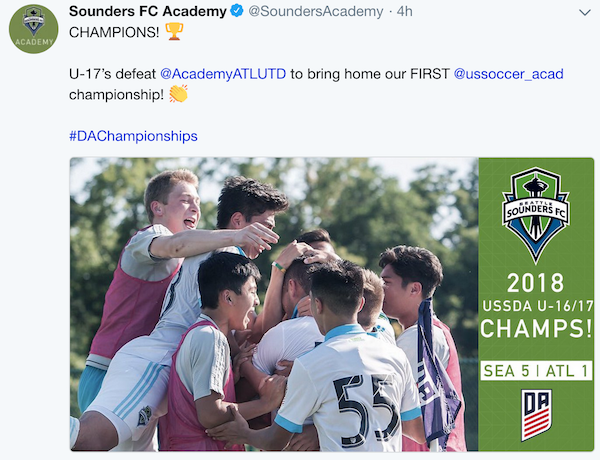 Coach Chris Little's Seattle Sounders' team came into the final against Atlanta United having scored at least three goals in each of its playoff games. The Sounders made it 27 goals in six games with its 5-1 final win. Ray Serrano's hat trick gave him 22 goals for the season. Seattle's Marlon Vargas and Atlanta's Victor Delgado were red-carded in the 43rd minute, with the score tied, 1-1. Serrano scored just before halftime to give the Sounders the lead and made it 3-1 in the 64th minute. Alfonso Ocampo Chavez, who set up two goals, and Azriel Gonzalez added goals in stoppage time. 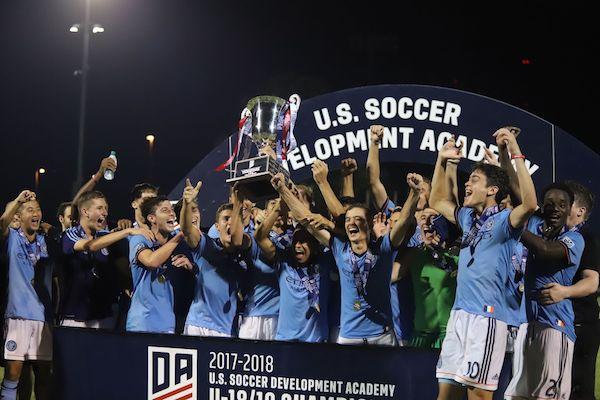 In the 2018 final, the Galaxy star trio of 16-year-old Efrain Alvarez, Ulysses Llanez (17) and Alex Mendez (17) went up against NYCFC's midfield duo of 15-year-old Gio Reyna and 16-year-old Justin Haak, who were backed up by a superb performance from 2000-born 17-year-old Ghana-born central defender Kwaku Owusu. (Alvarez, Llanez, Reyna and Haak were playing up, still eligible for U-16/17).

The Galaxy, coming off a 2-0 overtime win over Vancouver in the semifinals two days earlier, struggled to find its rhythm as Reyna and Haak controlled the midfield for much of the game.

NYCFC, coached by Matt Pilkington, had reached the final with a 1-0 semifinal win over the Columbus Crew, which beat Vancouver, 2-1, for third place.