How would you line up an 11-player all-star team based on the players' performances 2018 World Cup? Here's what we came up with. 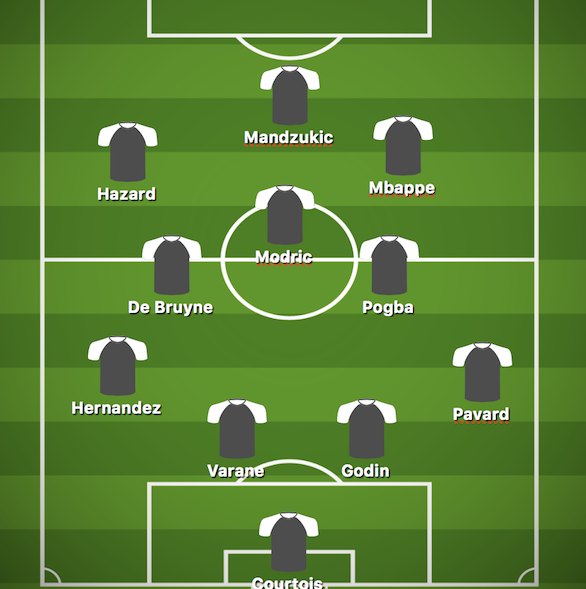 Thibaut Courtois (goalkeeper) Belgium
We might be talking about Brazil or England if it wasn't for his saves.

Benjamin Pavard (defender) France
The 22-year-old, whose golazo against Argentina set France on the path to the title, turned out to be a key late addition to the French backline.

Diego Godin (defender) Uruguay
Chief of the La Celeste defense that gave up zero goals in the group stage and beat Portugal before falling to the eventual champs.

Paul Pogba (midfielder) France
The world champion's midfield orchestrator put an exclamation mark on his performance with a goal in the final that started with his 50-yard pass.

Kevin De Bruyne (midfielder) Belgium
Scored the winner against Brazil and set up the winning goal against Japan.

Luka Modric (midfielder) Croatia
The playmaker for the most surprising World Cup finalist ever.

Kylian Mbappe (winger) France
Most successful teenager at a World Cup since Pele in 1958.

Mario Mandzukic (forward) Croatia
Spearheaded Croatia's run the final with his winner against England and also struck in big win over Argentina.