How about VAR -- a revolutionary development in refereeing -- how did that fare? Pretty well, I’d say. As it ought to have done -- I mean, who is going to argue with VAR’s basic job: To help the referee, to make sure that if he misses something or makes a “clear and obvious error,” VAR will butt in and set matters right. 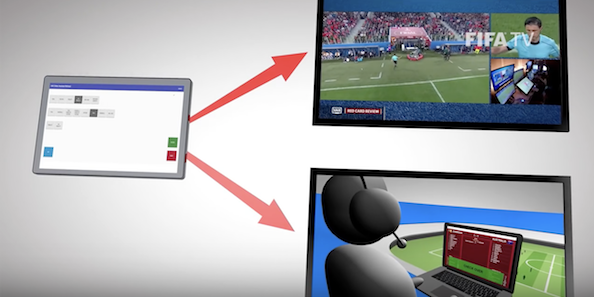 Limiting my judgment narrowly to that objective, I’d say VAR did well. When I include another criterion, one that came up repeatedly during various pre-World-Cup VAR trials -- that of too many intrusions leading to lengthy pauses in the game while decisions were made -- I think it’s fair to say VAR did even better.

I believe there were some 20 game interruptions -- hardly a massive figure in the course of 64 games -- with an average pause of 80 seconds.

I’m not overlooking the inevitable happening -- that VAR will have a bad game now and then. For me, that happened -- unfortunately -- in the final, when I found myself in disagreement with three referee decisions -- the free kick that led to France’s first goal, the penalty kick that enabled the second goal, and the refusal to grant Mario Mandzukic a penalty kick when he was manhandled by Paul Pogba. All calls that went against Croatia.

But one bad game does not erase the generally positive impression made by VAR. Excellent, in fact, because my overall impression is that most of the VAR interventions tended to help attacking play -- in particular by “awarding” penalty kicks. The penalty kick total was nearly double what it was in 2014. Of course, proof is impossible, one has to assume that VAR was responsible for most of the increase, but I think it’s a pretty safe assumption.

The same assumption can be made in the case of holding, pushing and shoving at corner kicks and free kicks. Though this is less clear. On one occasion I noticed a referee, in the midst of his usual thankless task of trying impose reason on the holders and the shovers, make the TV-screen sign to them -- evidently a warning to them that they were being monitored up in the VAR room.

I begin to have a problem here. The referee is also watching them -- so how come his eagle eye is not enough to deter them? We all know the answer to that one: Because the referee rarely calls a foul. If he does so, you can almost guarantee the call will go against an attacking player.

My problem grows rapidly, because we now enter an area that I have been complaining about for years: the refereeing insistence on always giving benefit of doubt to defenders.

But is this a VAR problem? I think it is. It is one that VAR, by being super-active in these situations, could speedily eliminate. I don’t recall VAR taking action in any of these cases in Russia. Nor do I recall that the holding etc. disappeared.

VAR needs a clear policy on this. It should be one of zero-tolerance. Unfortunately, this is one that would completely eliminate the referee. His fault, for sure. He has not been making the calls, but now we have someone, or something, that will make them.

Or do we? Time for a reminder: the VAR decisions are not made by technology, they are human decisions made from review of TV replays. Those reviews are made by referees or ex-referees ... who are quite likely to have the same pro-defense bias as the guy on the field.

We’re back where we started. The calls are not made by the referees -- but neither, as far as I could detect, were they being made by VAR in Russia. The point will be made -- and it is, at first sight, a cogent one -- that the calls now don’t need to be made, the mere hovering presence of VAR, the threat that it “sees all” (that TV-screen sign), will be enough to cut out the grappling.

No, it won’t. It might, in one game -- or maybe, in one tournament. But how long does it take soccer players to work out that their sins are not being punished? Once they know that, the sins will continue.

It is also to be remembered that, at the moment, VAR is not widely employed. The idea that VAR can be used as a menacing deterrent is not one that can be universally applied. Players will run into it infrequently.

VAR, then, suffers somewhat from two intrinsic failings: that it is only used on rare occasions, and that it is open to abuse as a substitute for, rather than an aid to, referees. The criticism is this: that the infrequently used VAR is taking over decisions that the universally involved referees should be making all the time.

Those penalty kicks, for instance. For sure, the sport needs more goals. But it does not need more penalty kick goals. If referees can be persuaded (by VAR perhaps?) to make the penalty kick calls they currently prefer to avoid, then defenders would be confronted with an every-game situation in which their dodgy tackles might cost them dearly. The hope being, of course, that this would make them less likely to make those challenges with a resulting opening up of more goalscoring chances from the run of play.

Only that shift in refereeing practice and mindset -- the abandonment of the pro-defense mindset -- will solve the problem. To have VAR involved as a featherbed -- something the referee can fall back on, can draw an imaginary TV screen and say, in effect “they, not me, will make the decision” -- belittles the referee and devalues VAR.

There remains the obvious problem of goalkeeper movement at penalty kicks. VAR -- perfectly equipped to deal definitively with it -- chose to completely ignore it. Though that sounds more like a inane policy decision rather than anything wrong with VAR.