A 2-1 win over Paris Saint-Germain sends the NWSL's North Carolina Courage to the final of the inaugural Women’s International Champions Cup against Lyon, the three-time defending UEFA Champions League champion. 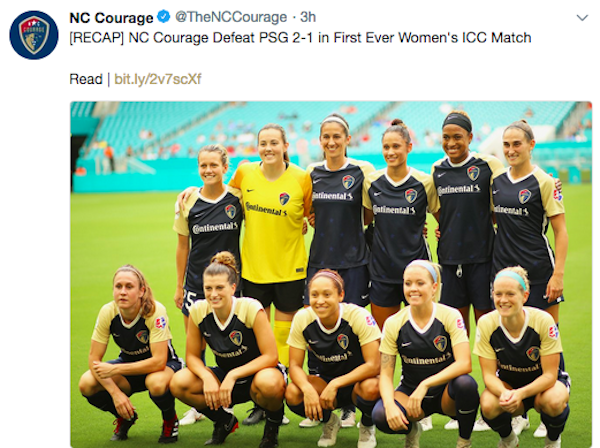 Lyon lived up to its reputation as perhaps the world's greatest women's club team -- it also won the UEFA Champions League in 2011 and 2012, and the last 12 French league titles -- with a dazzling performance in a 3-0 win over Manchester City the other semifinal in Miami on Thursday.

French national star Eugenie Le Sommer scored for Lyon in the 4th and 14th minutes, and Norway's Ada Hegerberg struck in the 16th minute in a dominating Lyon performance over Manchester City.

The Lyon defense was marshaled superbly by Saki Kumagai, whose Japan team she usually captains fell, 4-2, to the USA in Kansas City on Thursday night.

GAME REPORT USA-JAPAN: Morgan gets plenty of help on hat trick in opening win at Tournament of Nations

Unfortunately for the North Carolina Courage, its squad for the ICC is significantly diluted because the USA's Tournament of Nations that started with the Japan win.

Courage players Merritt Mathias, Samantha Mewis, McCall Zerboni, Abby Dahlkemper and Crystal Dunn are with the U.S. squad. All but Mathias played against Japan. Also, the Courage's Debinha is with the Brazilian national team.

Against Paris Saint-Germain, Jessica McDonald scored for the Courage in the 19th minute after a feed from defender Kaleigh Kurtz.

Paris Saint-Germain equalized before halftime with a Kurtz own goal. But Darian Jenkins' first professional goal decided the game in the 84th minute, 10 minutes after the 23-year-old UCLA alum entered the game. Jenkins deftly volleyed home a cross by Lynn Williams.

The women's semifinal doubleheader on Thursday at the 65,000-capacity Hard Rock Stadium delivered world-class soccer, highlighted by a magnificent Lyon performance and the Courage's dramatic win, but drew only a few hundred fans. 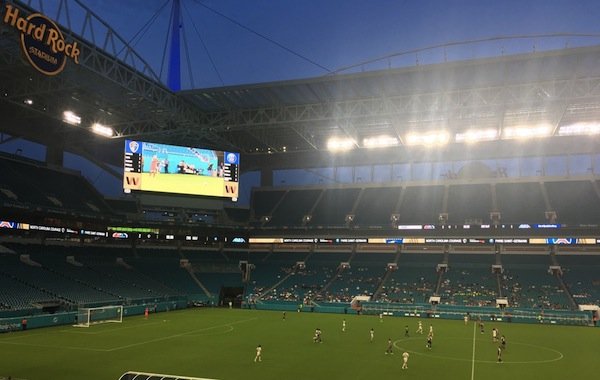