Chris Richards' parents' trip from Alabama to Miami was well worth it. Their 18-year-old son started for Bayern Munich in its 3-2 loss to Manchester City in the International Champions Cup. 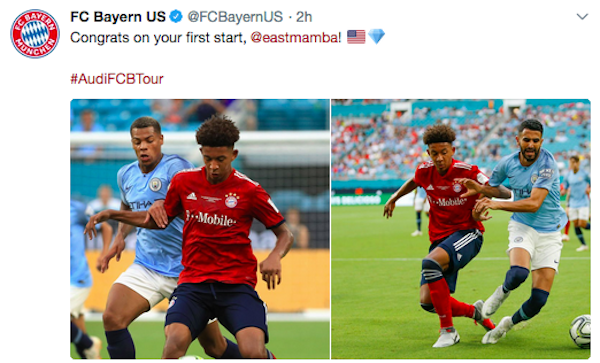 Richards left Alabama to join Texans SC Houston in 2016, helped the Texans win the 2017 Development Academy U-18/19, and then moved to FC Dallas' DA team for the 2017-18 season. He signed as an MLS Homegrown player in April. In early July, FC Dallas loaned Richards to Bayern Munich through December as part of its partnership with the Bundesliga champion.

"I think Chris did very well," said Bayern coach Niko Kovac after Richards central defense performance against Man City. "He's a young kid and it's not easy to join a team that's been playing together for a long time. He did very many things right and few things wrong. Everybody at Bayern is looking forward to his development. He's a talented boy who has hard work ahead, but I've already seen that he's determined to work hard."

Bayern traveled to the USA without a dozen national team players, including central defenders Jerome Boateng, Mats Hummels, Niklas Suele, who are on extended leave following their World Cup participation. That opened up opportunities for younger players, and Richards entered in the 62nd minute of Bayern's 3-2 loss to Paris Saint-Germain and at halftime of a 2-0 loss to Juventus.

Richards found out he'd be starting in place of Spanish central defender Javi Martinez a few hours before the clash with Manchester City.

"I learned around lunch time and I was super excited," Richards said. "Javi's knee wasn't feeling too well so I knew there was a good chance of me starting. Once I got the shot, I was ecstatic.

"It was amazing. My first, first-team start, and going 90 minutes."

The first couple of minutes, Richards cleared three balls out of danger.

"I tried to get it as far away from our box as possible,' he said.

He said Kovac's pregame instructions were: "Just play strong, play fast. Those are the two big things. Once the level gets higher, the speed of play gets higher."

Although at Bayern a short time, he's struck up a friendship with Austrian international defender David Alaba.

"It's amazing," he said. "He's a world-class player. A lot of my friends here are fans of his. It's weird being able to sit and talk with him. It's a really good experience. And he's a great person and player."

The plan is for Richards to play for Bayern's U-19 team when the team returns to Germany.

Of his outing at Hard Rock Stadium in Miami, Richards said:

"I wish I could do more. That comes with every game. I think today I had a good performance, but there’s always stuff I can work on. Hopefully I made a good push for the first team.

"I'm starting off with the U-19 team and there's always a chance to go forward, depending on how well I play and my progression. The goal by December is to maybe get on the roster of the first team for a Bundesliga match, but whatever happens, happens."