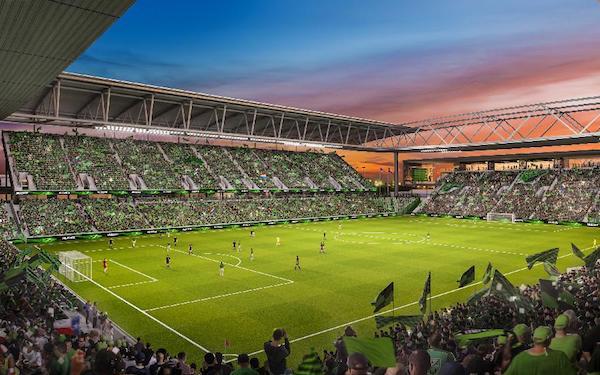 If Precourt Sports Ventures, owner of the Columbus Crew, gets its wish, the Austin City Council will vote to approve a term sheet for a deal on a soccer stadium on Aug. 9.

The first step takes place in Wednesday when the city council holds a special meeting to discuss the terms. While there are lots of moving parts -- not least of which is a lawsuit to block a move from Columbus until local groups are given a chance to buy the Crew -- there appears to be some movement toward getting an agreement done in Austin.

The Austin move is a relocation bid, not an expansion move, so the dynamics are different. There is not the groundswell of soccer support in Austin present in other markets like Cincinnati or Sacramento -- Austin does not have a history of success with pro soccer -- but there is neither the opposition that killed or halted the momentum of other expansion bids.

Precourt Sports Ventures is pushing to get an agreement done by Aug. 9 -- it first asked for a deal be completed in June -- in order to wrap one of the two prongs it is dealing with.

1. PSV (i.e. the stadium company that it will form) to privately finance the construction of a 20,000-21,000-seat stadium at McKalla Place, city-owned land in North Austin, to the tune of $200 million.

3. PSV to retain all revenues from the stadium (minus taxes).

4. PSV to pay for site preparation and infrastructure around the stadium (estimated to cost at least $3 million).

5. PSV and the city to share in putting money aside, also beginning in Year 6, to pay for capital repairs.

6. PSV to provide almost $96 million in “direct community benefits” over the 20 years, though many of them are soccer-related: formation of a Development Academy program (to the tune of more than $48 million), soccer club and camp scholarships, costs of putting on soccer clinics. The benefits include the value of volunteer work and free use of the stadium (five city events a year).

7. PSV to set aside an acre for a developer to build up to 130 affordable units of housing.

As with many MLS stadium projects that have gained any traction, the PSV deal in Austin has the support of its mayor, Steve Adler.

The most vocal critic of the current process is Council Member Leslie Pool, whose district includes the McKalla Place site. In an interview with the Austin American-Statesman, she called the term sheet "a massive giveaway of taxpayer dollars to a private corporation" -- and that's after significant changes from the initial term sheet.

She wants to hear how the site could otherwise be developed. (There are two other mixed-use development projects being proposed and others could be submitted by Friday's deadline.) At the very least, she wants PSV to pay for the cost of Metro Rail station adjacent to the site.