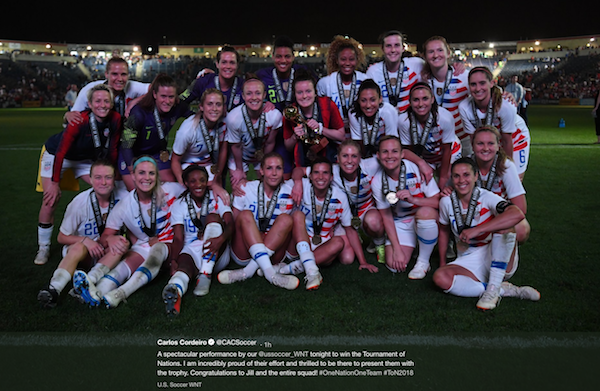 Unfazed by an early own goal, the USA went into halftime tied 1-1 thanks to a golazo by Rose Lavelle -- and took complete command of the game in the second half for a 4-1 win over Brazil that earned Coach Jill Ellis' team the Tournament of Nations' title. The USA, which needed to win by at least two goals to surpass Australia, started the four-team tourney with a 4-2 win over Japan and a 1-1 tie with the Aussies.

One expects to see some brilliant skill in a Brazil game. On Thursday evening, that came mainly from the Americans, especially Tobin Heath. With the game tied, 1-1, early in the second half, Heath faced two Brazilian defenders, pulled the ball back with the sole of her foot, nudged it sideways with the outside of her foot, and sent a delicate chip cross into the goal area that Julie Ertz stormed into to stab into the net. 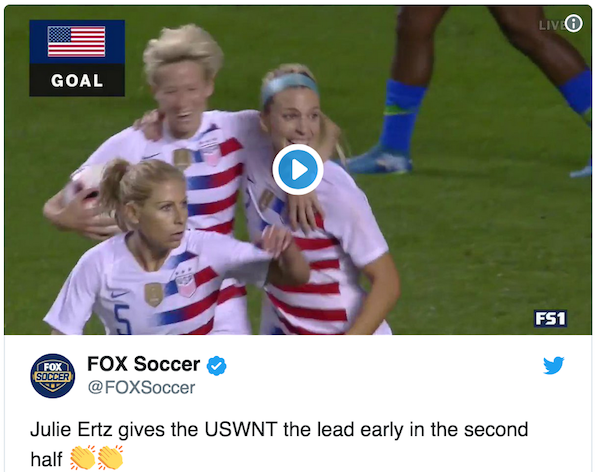 Eight minutes later, Heath stroked an 18-yard shot into the corner of the net. She had started the sequence 30 yards deep in her half, with a pass to Lindsey Horan, who chipped the ball precisely to Alex Morgan. The center forward evaded Brazilian defenders long enough to send the ball back to Heath.

2. The USA played with poise, confidence and creativity

The Americans stormed out of the gate, pressed the Brazilians hard, and wasted a couple of chances before going down 1-0 in the 16th minute to an own goal by Tierna Davidson. While trying to intercept a low Beatriz cross following a swift counterattack on the left flank, the 19-year-old Davidson deflected the ball off her shin past U.S. goalkeeper Alyssa Naeher. But the USA seemed unfazed by the setback.

One would have expected more Brazilian counterattacks to come. But the central midfield play of Ertz and Horan prevented any cohesion in the Brazilian midfield, while left back Crystal Dunn, so in sync with left winger Megan Rapinoe, kept attacking and kept Brazil on its heels.

Rapinoe and Dunn had combined well early on without fruition. But in the 33rd minute, after Rapinoe received another pass from Dunn, Rapinoe changed tactics and instead of flying down the wing, lofted a pass cross-field that Morgan nodded on to Horan. Lavelle received Horan's pass on the bounce 14 yards out and struck a perfect half-volley into the far corner of the net. In the second half, the USA, usually so inclined to attack down the wing, varied its forays and overwhelmed the Brazilians. 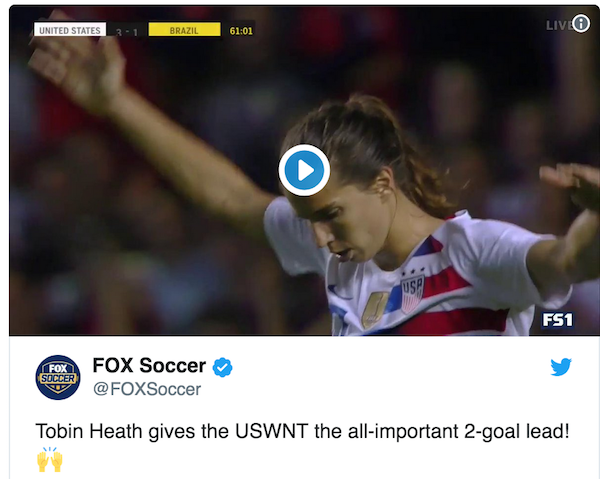 3. Jill Ellis can be pleased -- especially with Lavelle

The victory over Brazil extended the USA's unbeaten streak to 19 games -- 16 wins and three ties. The only blemish during this tournament was the 1-1 tie against Australia, but that ended on a high note as the USA avoided defeat with a last-minute goal by Horan. But perhaps most of all, ahead of World Cup qualifying, the U.S. squad is starting to look healthier and deeper. Mallory Pugh and Kelley O'Hara are still recovering, but Heath and Lavelle had entered the tournament having played only 26 and 25 minutes, respectively, in 2018. The plan was for Lavelle to play limited minutes, and she came on in the 79th against Australia and the 64th against Japan.

Against Brazil, Lavelle made her first start since September 2017. In the 8th minute, she waved an apology to Morgan for a poorly hit cross. Twenty-five minutes later, she scored a terrific goal that ignited the USA on to an overwhelming victory -- and momentum into the next phase for the team leading toward the 2019 World Cup. 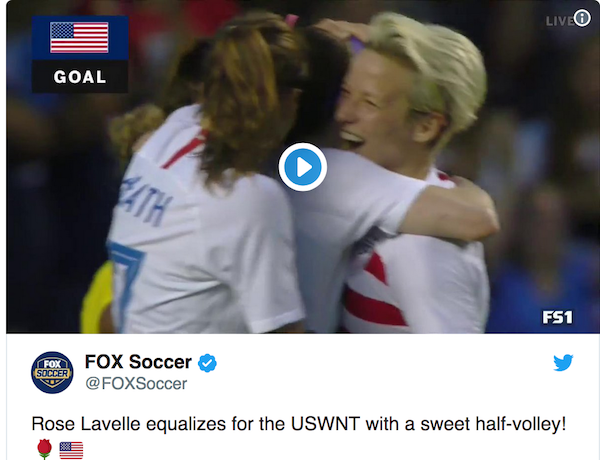