The challenges referees face while coping with injuries

What a difference a year makes. Last summer, I was preparing for my 10,000th game while trying to raise money for the U.S. Soccer Foundation. And did a bunch of media interviews after my milestone game.

Not as much happiness for me of late as, unfortunately, I’ve been in a good deal of pain at times.

This past May, I was refereeing a Long Island Junior Soccer League game when I felt a twinge in my right knee while running. I immediately knew that it was not a good thing.

So I took it easy and then tested it but was not able to run without discomfort. An appointment with my Primary Care Physician led to multiple appointments with an orthopedist in sports medicine and multiple tests.

If I had been officiating a high school, college or professional game, there would have been a trainer there to help me as soon as I hurt my knee. Players on those teams at the very least have a connection to a doctor who can treat them. And the PRO referee group that serves professional leagues in North America provides medical care for their refs, led by a sports scientist. There is an “all hands on deck” mentality to get the person healthy and back on the field as soon as possible.

Not for me as I had to negotiate the labyrinth of doctor appointments, referrals and tests all on my own, just like every Weekend Warrior. This was very frustrating as it took weeks to get an exact diagnosis and, even though I have health insurance, this has been quite expensive too. I also had to inform all the assignors I work with what my doctors were saying and whether I could ref the assignor’s games.

Both my Primary Care Physician and orthopedist moved my injured leg in various ways but produced no pain. I could cycle intensely without any issues and the only thing that caused discomfort at times is running, which is rather important as I obviously need to run up-and-down a soccer field to ref. Yet the orthopedist told me to “live your life” and start refereeing again, even after reviewing the MRI.

The orthopedist said that I do not necessarily need an operation and I should try physical therapy before settling on surgery. I already had a prescription for physical therapy for my left shoulder.

Three weeks after tearing my knee meniscus, I started experiencing intense pain in my upper left arm and the pain increased over a 36-hour period. It was nearly midnight when I went to the Emergency Room of a local hospital and was diagnosed with calcific tendonitis, or calcium deposits in my left shoulder.

Never heard of calcific tendonitis and I found out that medical science does not know the exact origin. I followed up with my orthopedist, who looked at the X-ray and said, “That’s painful! You needed a cortisone injection.” By then, my pain had passed so he did not treat it.

But five weeks later, I developed the same intense pain in my upper left arm so I insisted to his staff that the orthopedist see me the next day so I could get the needed cortisone injection. After all, why be in pain when there is an answer?

So I have started physical therapy on both my left shoulder and right knee at Soundside Physical Therapy, next door to and with a window view of the Futsal 516 pitch, where I officiated my milestone game a year ago.

My body has never been very flexible so I have been stretching every morning for the past three years. But my current physical therapy regimen has helped me to touch my toes for the first time in memory. My knee meniscus will most likely remain torn but the idea is to get everything around it so good that I’ll be able to ref and run without any discomfort. 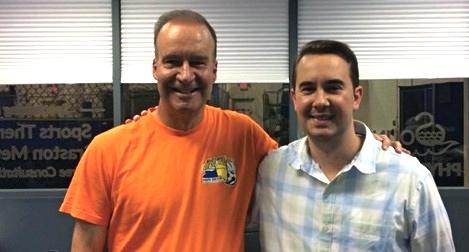 Randy Vogt on the left with his physical therapist, Dr. Adam Johnnidis

As I’m not currently as mobile as I would normally be, I’ve not been on top of play as much as usual as the ref yet my officiating has surprisingly not suffered. I learned that I need not be within 15 yards of the ball nearly all the time and that, especially when reffing solo, a panoramic view of the field can be very useful at times.

Being a little further from play than normal, I’ve been very emphatic in my decisions and signals and this has avoided dissent in almost all circumstances. Something to remember when I can run the field very fluidly again. Which hopefully will be sooner rather than later.