Review: Twin 'Champions' books by Ann Killion to delight both boys and girls

San Francisco Chronicle columnist Ann Killion  has covered soccer and other sports for more than a quarter century, including men's and women's World Cups and Olympic tournaments. The 2014 California Sportswriter of the Year, and New York Times bestselling author, delivers a pair of extensive and entertaining soccer books for middle-grade readers. 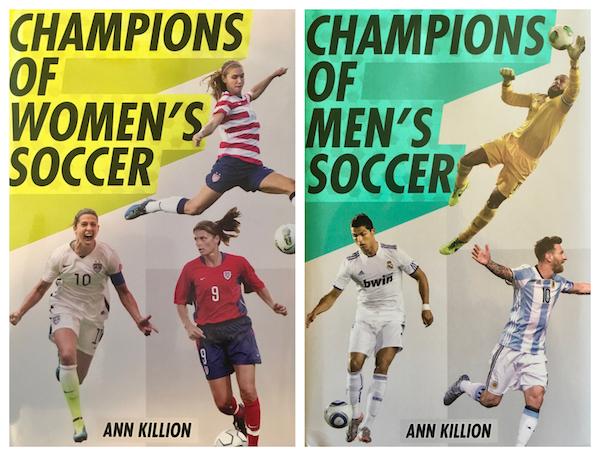 Champions of Women’s Soccer is an entertaining and thorough read into the women’s game for any young fan.

It starts with a “Pregame” section that introduces the women’s game -- the only U.S. sports team that truly unites the whole country, writes Killion. Then the “First Half” starts, profiling a USA women’s all-time starting 11:

Killion doesn’t sugar-coat, explaining to her young audience Solo’s controversies, the barriers that women’s soccer as a whole has overcome, and the sexism that the players have faced.

In the “Halftime” section, Killion summarizes the history of women’s soccer, starting with the first international women’s game between Scotland and England in 1881.

Most soccer fans wouldn’t know that the English FA banned women’s soccer in 1921, stunting the growth of the women’s game around the world. But Killion concisely explains how Title IX proved to be a boon for the sport and provided the USA with the means to take the women’s soccer world by storm.

In the “Second Half,” Killion profiles an outside-of-the-USA starting 11, exploring Marta’s rise to international fame, Christine Sinclair’s tremendous goalscoring ability, and Sun Wen’s success in the face of China’s one-child policy that made her parents rather her sit at a desk and study.

The book includes the Top 10 events in the history of women’s soccer – from the 1999 World Cup to the 2016 Rio Olympics – and introductions to rising stars such as Mallory Pugh, Sophia Smith and Rose Lavelle.

Through it all, Killion relies on statistics, personal anecdotes, and quotes from family members, coaches, and friends, providing in great detail what it’s like to be a professional women’s soccer player.

Killion -- also the co-author of Solo’s “A Memoir of Hope” and “Throw Like a Girl,” with softball great Jennie Finch -- successfully maneuvers around the heady subjects of bias and sexism in women’s sports for her young audience while simultaneously illustrating the talent and dedication it takes to be a champion of women’s soccer.

A constant theme throughout is that the athletes stress the importance of goal-setting and self-confidence in the face of adversity -- a powerful message to the young girls who read this book, looking for inspiration from their idols.

Thorough research, insightful personal anecdotes, and a perfect dose of statistics for young soccer enthusiasts makes Champions of Men’s Soccer a great gift to any young soccer fan who wants a deeper understanding of the men’s game.

In between, Killion outlines the different professional leagues around the world, providing perspective to her young audience about the true ubiquity of the world’s most popular sport. MLS gets a couple pages, too: "It has come a long way fast."

Many young readers have no memory of the top players from the 1990s, like Eric Wynalda and Claudio Reyna, but Killion’s writing illustrates their importance in the echelons of American soccer

"Extra Time" covers the World Cups, and Killion finishes with a look at the rising stars–– from the USA’s Tim Weah, to France’s Kylian Mbappe.

"Champions of Men’s Soccer," while easy to read for a young audience, isn’t childish in its content. It’s a terrific overview of where the game has come from and where it stands today.