Folarin Balogun, who played for England at the 2018 U-17 European Championship, is on the U.S. U-18 national team roster for the 2018 Vaclav Jezek Tournament in the Czech Republic. The USA-born 17-year-old was raised in England has been with Arsenal's youth program since age 10. 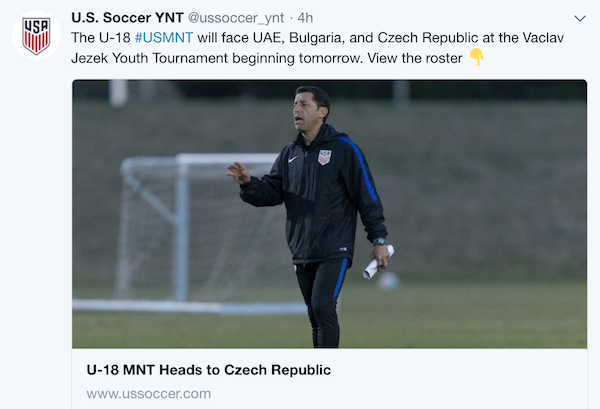 The USA, which won the Vaclav Jezek Tournament in 2014 and 2016, faces the United Arab Emirates (Aug. 21), Bulgaria (Aug. 22) and host Czech Republic (Aug. 24) in Group A. After group play, each team will play a placement game against the Group B team -- Japan, Hungary, Slovakia or Ukraine -- with the corresponding finish.

U.S. U-20 coach Tab Ramos is in charge of the team, filling in for Omid Namazi, who left U.S. Soccer in June to coach top-flight Iranian club Zob Ahan.

Balogun played for England as it reached the semifinals of the UEFA U-17 Championship in May. England fell to eventual champion the Netherlands in the semis in a penalty-kick shootout in which Balogun's shot was saved. Last season he played for Arsenal's U-18 and Premier League 2 (U-23) teams.

He is one of two newcomers to the U.S. U-18s, along with Nathan Harriel of Florida's Chargers Soccer Club.