The USA tied, 4-4, with fellow 2018 U-17 Women's World Cup qualifier South Korea in Paju in the first of two friendlies against the Koreans. They meet again on Tuesday. 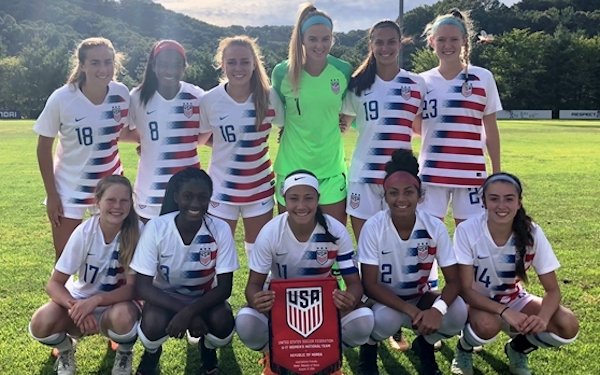 “It was an incredible experience for our players to play a talented South Korea team that finished second in Asian qualifying and has qualified for the U-17 World Cup,” U.S. coach Mark Carr said. “We wanted this type of game to learn about ourselves and it was an experience that we can’t replicate in our home environments.”

Goals by Maya Doms and Makenna Morris were sandwiched by Korean strikes for a 2-2 halftime score. Trinity Rodman put the USA ahead, 3-2, in the 73rd minute but the Koreans equalized four minutes later. Sunshine Fontes' 77th minute goal gave the USA a lead that it lost to a 90th-minute strike by Hyun Seul-Ki.

“We wanted to work on some things today in attack and we checked a lot of the boxes,” said Carr. “Scoring four goals on a very good South Korea team is no easy feat, so I feel really happy about that. On the defensive side, we still have a lot of work to do. Obviously, we are in the process of building a new defensive unit. With the loss Kennedy Wesley and Kate Wiesner [to serious knee injuries] and with [goalkeeper] Angelina Anderson unavailable as she was coming back from the U-20 World Cup, it will take a bit of time to identify those players who can help us accomplish our goals.”