For most of its history, the U.S. Soccer Federation played a limited role in youth soccer, managing the youth national team program and depending mainly on the U.S. Youth Soccer-run Olympic Development Program (ODP) for talent identification. But in 2007, the Federation launched its Boys Development Academy, which expanded to U-12s in 2016. The Girls DA kicked off in 2017. Ahead of the 12th boys season and the second girls season, we spoke with Development Academy Director Jared Micklos about the U-12 program, new substitution rules, and DA costs. 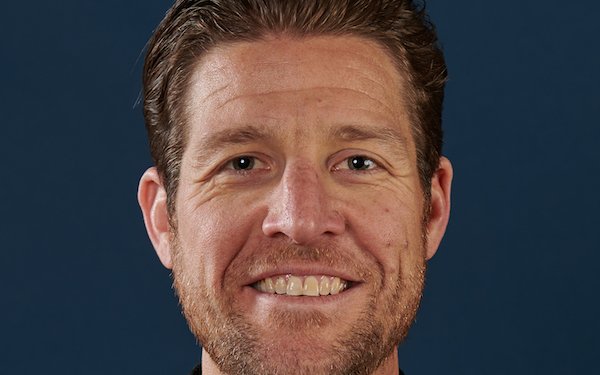 SOCCER AMERICA: When we interviewed U.S. Club Soccer CEO Kevin Payne last month, he said a problem with American youth soccer is there’s too much pressure put on kids at a young age. Payne said, “I think one of the worst offenders is the DA [U.S. Soccer Development Academy]. I think the whole idea of having aggressive DA program expansion below the age of 12 -- I just think it's dumb.” Would you like to respond to that?

JARED MICKLOS: This is less about the comment and more about what we are trying to do:

Creating a clear pathway for players in a club is something that we believe is helpful for the player, it’s good for their development, and it’s good for the club to be able to have a way to progress the player through these age-appropriate levels.

For us, at U-12, it’s about creating a base. And that’s why we have a larger number of clubs at U-12 than we do otherwise. And at that, we try to localize it, or regionalize it if we have to, as much as we can, because of the [travel] costs. Because we do believe in reducing the cost as much as we can. ... This is another area in the Development Academy, in player development, that we subsidize heavily.

SA: Payne said, “There is a very small number that are being anointed and a very large number that’s being told, you're not good enough” …

JARED MICKLOS: For us, it’s actually not the idea to anoint players at U-12 and say, this is the group.

We know that identifying talent is very difficult, in general. And it’s certainly difficult at the age of 12, and any time before that.

Our goal for the U-12s is to create the base, it’s about removing the results, removing standings, etc., so there’s not this overemphasis on player selection, or deselection of players, for that matter.

They’re meant to be the foundational age within the academy where the clubs can build a pool of players who will progress over time.

It’s not our goal, to say these are the 150 clubs that have all the best U-12 players in the country, because we know that’s not the case.

SOCCER AMERICA: A rule change for the 2018-19 DA season is to allow substitutions on the fly at U-12. What’s the reasoning behind that?

JARED MICKLOS: We piloted that in two markets last year: Chicago and Colorado. And we had Technical Advisors and scouts watching those games.

We talked to the clubs and we, through our leadership group, believe it’s more about the game and less about the stoppages and the interruptions.

When a player enters at the mid-line, and it takes seconds away of the game to get the player off the field … It takes time to manage the players coming on and off.

We believe [subs on the fly] is an improvement, because it decreases the amount of interruptions in a game. And, therefore, we’re taking that initiative, to allow players to enter and come off the field on the fly, for all U-12 games next season. 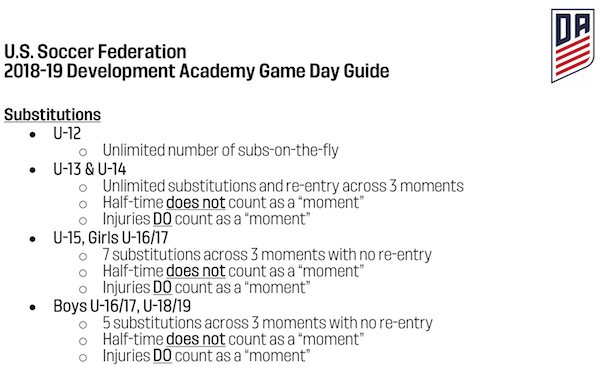 SA: Based on games I referee at U-12 and under, I agree that the substitutions waste a lot time and cause too many interruptions. But is there a possibility of coaches abusing it?

JARED MICKLOS: We put some talking points around it. We actually did it during the pilot, because we wanted people to understand it. So, we said, this is what it is, and this is also what it isn’t.

We’re not talking about the old-school indoor soccer subbing where someone goes in the backdoor and the attacker runs out the front door, and they time it up with a through ball behind the defense.

That’s not the idea.

We very clearly state in one of our guidelines: this substitution is not used to create an advantage on the field. It’s not used to slow the game down, anymore, by a player going in late and trying to manage the result.

It’s very much to de-emphasize the whole process and put the emphasis back on the players and the game.

One of things we said is, just substitute the way you normally would during a game, and just don’t worry about whether the ball is in or out of play for your team or the other team. 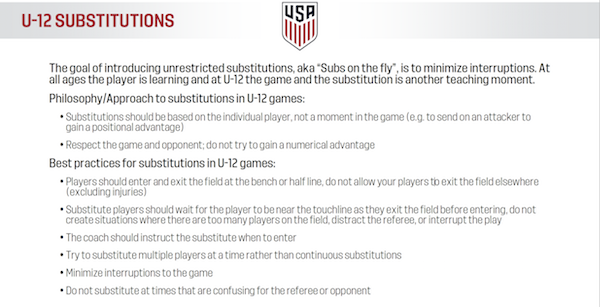 SA: When the Boys DA launched in 2007, one of the big questions was whether it would help make youth soccer less expensive at the elite level. For sure, with MLS clubs subsidizing their DA teams, very many more elite players are playing cost-free than ever …

JARED MICKLOS: We know MLS clubs have really led the way in reducing costs and creating many cost-free environments, and there’s an additional group of clubs, amateur and some other professional clubs, that have subsidized costs, which is fantastic to see for players.

SA: But I have also heard complaints that certain DA requirements have added costs. Before we get to the specifics, how much attention do you pay to feedback from clubs about the expenses and is U.S. Soccer constantly reevaluating ways of reducing costs?

JARED MICKLOS: We are asking about costs and fees every year in a survey document from the clubs.

Our goal is always to reduce costs.

We absolutely try to do that in as many ways as we can by taking on the costs of some of these areas where if these clubs had to pay, it would increase the fees even more. There are so many hidden costs to creating these environments.

SA: What does U.S. Soccer subsidize?

JARED MICKLOS: Everything from event fees, participation in the program, which there is none [club registration fee], only a nominal $50 [per] player and coach registration fee, and the referee costs at the older age groups -- those are all subsidized by the Federation to help reduce cost.

When you look at everything that’s hosted by the Federation, from our events, which are really tangible easy things to see, to behind the scenes costs like establishing a video platform for all the games to be stored and shared, which contributes to coach and player development, by reviewing it.

So, the clubs can take those moneys that they would normally pay into another platform and reinvest them into their efforts.

There are still other costly factors. These clubs do have to pay for facilities and some of them have fees to pay coaches. And there is a significant amount of cost for travel, even if it’s not a significant amount of travel. Still, getting the clubs to travel together in a bus, which is part of creating the right environment for them, and getting the players mentally prepared to play the game, and that comes with a cost.

There are a lot of those factors, but we are tracking that. We are trying to reduce them. Year over year we’ve seen more clubs invest more and the costs come down.

Clubs having to manage their own practice and game facilities is certainly a cost that they have regardless of [what league] they play in. 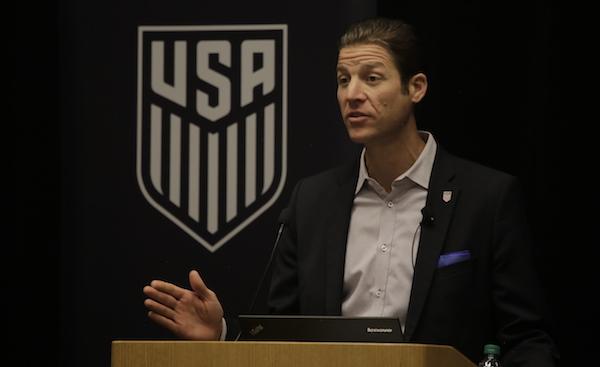 SA: One complaint is that the field space the DA requires for DA teams' practices is difficult to accommodate, especially when balancing it with a clubs non-DA's teams need for field space ...

The club manages that. There’s a recommendation' that yeah, the clubs should have half-field at times, they should have full-field at times. Based on what the topic is and what the coach is working on. And that should be planned out.

Regardless of where they play, every player deserves that kind of space when they play the game.

About the costs in general, we are tracking them and trying to reduce them.

SA: Have changes been made based on what you’ve seen?

This year we revamped the competition structure. We try to eliminate games that were far distances or at high travel costs when they did not have meaning and did not have the appropriate level of resistance between the two teams.

If you had a team that was a very strong team traveling from L.A. to Northern California, and that game was traditionally not a meaningful game -- a 4-, 5-, 6- or 7-goal margin -- we either remove that game completely from the schedule and replace it with a game that’s more meaningful for both teams, or we might have went from playing that game two or three times to playing it once.

So, we’re still spreading the cost within, but reducing it specifically in games where the level of resistance is not worth the trip or the investment for those players when we think about, is this a game for them to develop.

We reduced the number of games slightly in that effort. So, part of the process was bringing the number of games down, and creating open weekends, and allowing clubs to manage if they wanted to spend more money, traveling more, etc., rather than requiring that.

[Editor’s note: The DA also has cut costs for the U-12 program by no longer requiring the video-taping of every game. The issue of coach license requirements burdening clubs with extra costs was addressed in last week’s interview with U.S. Soccer’s Nico Romeijn (Chief Sport Development Officer) and Ryan Mooney (Chief Soccer Officer).]