Three months after playing for England at the U-17 European Championship, Arsenal's Folarin Balogun  is starring for the U.S. U-18s. He scored in his second straight game, a 1-1 tie with host Czech Republic that sends the Tab Ramos-coached U.S. U-18s into the Vaclav Jezek Tournament final against Japan. 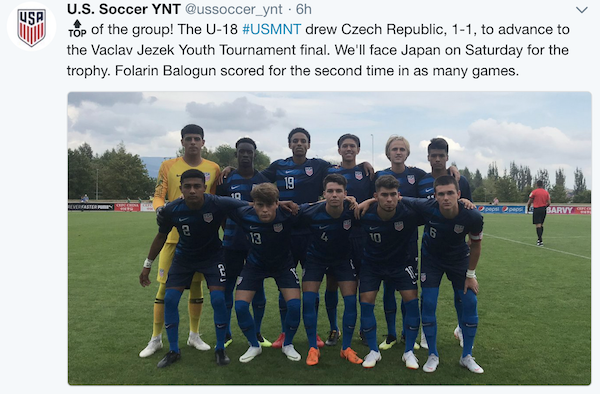 Balogun, who was born in New York and raised in England, also scored in the USA's 5-0 win over Bulgaria, which followed a 2-1 win in the opener over the United Arab Emirates.

Balogun joined the Arsenal youth program at age 10 and has most recently been playing for its U-18 and Premier League 2 (U-23) teams. He is allowed to play for the USA at this tournament without making an official national team switch because the Vaclav Jezek Tournament isn't an official FIFA competition