Germany stays the course with Joachim Loew -- for now

Joachim Loew, lucky to still be at Germany's helm following its 2018 World Cup debacle, has a crucial six weeks ahead of him. 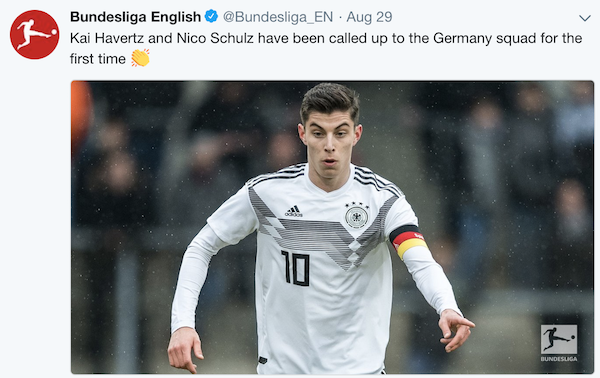 Coach of Die Mannschaft since succeeding Jurgen Klinsmann after the 2006 World Cup, Loew guided Germany to the 2014 World Cup crown, but followed up with a disappointing semifinal exit at Euro 2016, and Germany's worst World Cup in 80 years, when it failed to reach the knockout stage in Russia.

Germany's federation, the DFB, had before the 2018 World Cup renewed Loew's contract through the 2022 World Cup at a reported annual salary of a $4.4 million.

The games against France in Munich and the Dutch in Amsterdam are League 1, Group 1 games of the new UEFA Nations League. The last-place finishers in the three-team groups in League 1 get relegated to League 2, and that affects the seeding for Euro 2020 qualifying.

Loew had boasted about Germany's younger generation after the 2017 Confederations Cup win, but his faith in the old guard failed him at the 2018 World Cup.

Yet his 23-player roster for the France and Peru games includes 17 players from the 2018 World Cup and only three debutants: Thilo Kehrer (Paris Saint-Germain), Nico Schulz (Hoffenheim) and Kai Havertz (Bayer Leverkusen).

Three previously capped players who weren't part of the World Cup are back in the squad, including Manchester City's Leroy Sane, the 2017-18 English Premier League Young Player of the Year, whose omission from the 2018 World Cup squad boggled the mind. 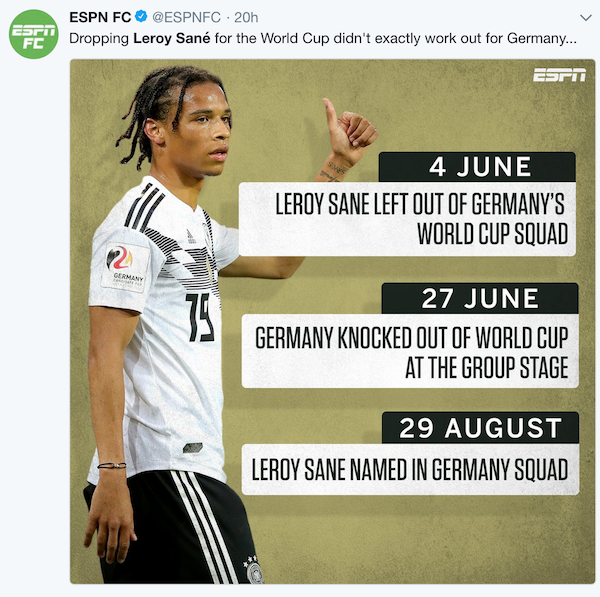 Upon announcing his latest squad, Loew took responsibility for the failure at the 2018 World Cup, at which losses to Mexico (1-0) and South Korea (2-0) sandwiched a 2-1 win over Sweden.

"My biggest overestimation was that we would reach at least the next round by dominating games," Loew said. "It was almost like arrogance, I wanted to persist with this tactic for too long and I kept trying to perfect it. I did not set up the team to play a certain way, whereas in 2014, there was a balance.

“Possession in the league is important but at knockout events there needs to be an adaptation. That was my biggest mistake. That I believed with this dominant possession game we will go through the group stage."

Loew also admitted he failed to motivate the team.

"We failed to provide important stimuli for the players," he said. "We only had a small flame, when my players usually have a fire. It would have obviously been my job to demand more from them. When we can get the right balance by reigniting the fire and passion, we will have strong foundations for the team."

Popular theories in Germany for the Russia debacle included the notion that the players who already won a world championship were complacent -- and that Loew is plagued by a weiter so (stay the course) approach. That he's too reluctant to shake things up.

Unlike French coach Didier Deschamps, who so obviously embraced and connected with his young players, Loew deputized the likes of Toni Kroos, who had been publicly critical of the younger players. German media also reported a rift between the veterans and the youngsters who won the Confederations Cup while the 2014 World Cup champs rested during the summer of 2017.

"With a good mix between experience and youth," Loew said, "we’ll get that feeling of absolute determination back. The team will be different.”

If it's not different come October, the DFB will have to realize the perils of staying the course.