The lectures that referees give to players: Meaningless? Embarrassing? Childish? Farcical? Probably all of the above

I have been trying for quite a few years now to persuade referees to let me listen in on what they say to players during a game. Not live, a tape will do nicely.

I make it clear that what I’m interested in are those short scenes where a referee intervenes after some rough play and seems to be severely lecturing a player -- a lecture that is usually accompanied by stern looks and extravagantly dramatic arm gestures.

On the whole, my request receives a polite “Why not?” sort of answer. Cooperation seems assured ... in this technological age, everything is recorded and therefore available. And then nothing happens. I have yet to hear a single word from those lectures.

Frustrating of course. So, a recent development looked promising: the availability of a tape made during this year’s English Cup Final (won by Chelsea, 1-0 over Manchester United).

I’m still not sure whether the tape has been officially released by the English FA or whether it has leaked its way into daylight. I’m guessing it must be an official release because there’s nothing on it that reflects badly on referees -- rather the opposite, as referee Michael Oliver gets it right when awarding the decisive penalty kick to Chelsea, and is promptly backed up by the VAR. The rapid interchanges between Oliver and his AR and the VAR are almost exemplary in their precise clarity.

For my purposes, this tape is of limited interest. Most of the talk is between the officials. It sounds like a CB or police radio exchange, and is really, I suspect, a piece of VAR propaganda, showing off how the system works. As such, it does a good job.

There is a small amount of referee-to-player talk. What might be new to some listeners-in is the referee’s repeated use of first names when talking to players. I’ll admit to being bothered by this. It has a schoolmaster-ish tone to it. And it’s not an approach to refereeing that can always be used -- can Oliver rely on it if he has to referee a Japanese or a Ukrainian team, with first names he may not even know, let alone be able to pronounce?

I’m left still waiting to hear what referees say when they upbraid players. Back in 2012, while watching a telecast of Mexico beat Brazil in the Olympic final in London, I was irritated by the way the referee (England’s Mark Clattenburg) kept talking to the players. Not exactly holding up the game, but he repeatedly seemed to have something important to say to them. What was he telling them?

I am not a believer, never have been, in the idea that it is the referee’s obligation to explain the rules to players. Because it is surely the responsibility of a professional player to know the rules. If he doesn’t, if he acts outside the rules, he will be penalized. And that will be his own fault. A player can never plead ignorance of the rules to excuse his fouls.

A more likely scenario was that Clattenburg was dishing out verbal warnings. Telling players they were courting a caution, telling them that next time they’d see yellow -- stuff like that. But even that I find questionable. I find no mention of verbal warnings in the rules.

Maybe Clattenburg was being less specific, was simply telling players to behave themselves. One cannot escape the impression that all the finger-wagging and the melodramatic arm gestures indicating “No more of this!” that accompany these warnings are nothing more than grandstanding. They allow a referee to let everyone know that he’s being tough ... when in fact he is going out of his way to avoid giving a card. 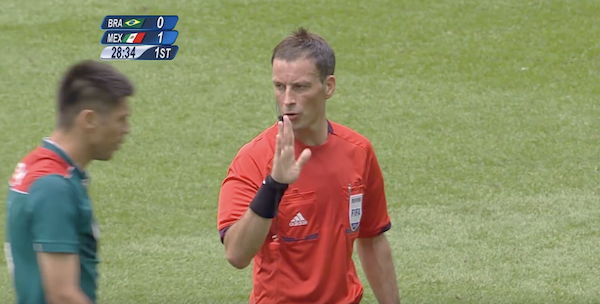 There was another aspect to Clattenburg’s actions, the same one that I mentioned earlier when talking of referee Michael Oliver. Clattenburg was always one of the more talkative of English referees (he is now in charge of refereeing in Saudi Arabia) but, as with Oliver, this style becomes a liability when the players don’t all speak English.

In the Olympic final, Clattenburg was confronted with the Spanish-speaking Mexicans and the Portuguese-speaking Brazilians. Spanish would probably be understood by the Brazilians -- so was Clattenburg speaking Spanish? As I have met and conversed with scores of English referees in my time, and have never met even one who speaks Spanish, I’d feel safe saying that Clattenburg was using English. Leaving a minimal chance of either Brazilians or Mexicans understanding what he was saying.

A pretty farcical situation: referees explaining the rules and/or giving verbal cautions (neither of which, in my opinion, they should be doing) in a language unlikely to be understood by the players.

Yet these admonitory lectures that referees inflict on players are a regular feature of refereeing, and are seen as a good thing by those who stress the importance of “man management.” Possibly -- but that phrase “man management” is a worrying one. Especially if it needs to be achieved through little chats that are, I suspect, vapid in the extreme, just plain embarrassing.

If I’m right, if these lectures are as childish as I suspect, then referees should just stop delivering them. They can bring nothing but scorn to the profession. Or maybe worse: a suggestion that referees are patronizing players

Am I right? The tape of the FA Cup final conversations, while it did not directly concern this topic, produced at least one revealing observation. In the London Times, columnist Giles Smith called the tape “a genuinely fascinating and insightful document, not just for revealing the constant, almost kindergarten-level man-management practiced by referee Michael Oliver . . .”

The key words there are “kindergarten-level man management.”

referees
11 comments about "The lectures that referees give to players: Meaningless? Embarrassing? Childish? Farcical? Probably all of the above".
Read more comments >
Next story loading