USA-Brazil: Any positives outweighed by inability to connect passes and problems up front

The USA's 2-0 defeat to Brazil on Friday night at MetLife Stadium in East Rutherford, N.J., should have come as no surprise.

After all, losing to Brazil is nothing new. The USA has lost 18 out of 19 meetings, the lone victory -- 1-0 in the 1998 Gold Cup semifinals -- growing in lore with each passing year.

Just 12,298 fans at the Los Angeles Coliseum witnessed Preki's screamer from 22 yards -- the first U.S. goal against Brazil in 68 years -- and a performance from Kasey Keller in goal -- 10 saves -- so good that Brazilian star Romario famously called it “the greatest performance I have ever seen in a goalkeeper."

By contrast, Friday's match, a low-key affair decided early on Roberto Firmino's goal, will quickly fade from our memories. Friendly games generally produce few surprises, and the first test of the 2018-19 season was no exception. Here's what was confirmed ...

1. Brooks and Miazga have locked down starting jobs

John Brooks played just his second game in the last year for the USA, and his steady performance was a reminder just how much he was missed in the final four games of the 2017 Hexagonal when the USA fell flat on its face.

The 25-year-old German-American, off to a great start in the Bundesliga, was rarely caught out of position against Brazil, provided a passing option out of the back that has always been a big U.S. weakness and was dangerous on set-pieces.

Since the early start of the new cycle, Matt Miazga has been the leader of the backline and except for losing Firmino on the opening goal he did not look out of place against the Brazilians

Both are starting on mid-level teams in big five European leagues -- Brooks at Wolfsburg, Miazga at Nantes in France -- so they'll get great competition this season. The key will be keeping both of them healthy.

Brazil scored its first goal so easily -- Douglas Costa burned left back Antonee Robinson and whipped in a cross to Firmino for a tap-in -- the second goal, converted by Neymar after a soft penalty, came so late in the first half that the Americans could have easily been deflated.

This is the youngest national team regularly playing together in 30 years -- three starters against Brazil were 25, five were 23 and the other three were 19, 20 and 21 -- but it doesn't lack self-belief.

“I think there could have been a situation where maybe we our confidence was blown [after the early goal]," said Coach Dave Sarachan, whose record is even at two wins, two losses and three ties since taking over 11 months ago on an interim basis. "That’s one of the things I’ve noticed with this group over the course of many friendlies now, they don’t lack confidence. I think that’s an important mentality for this group and for all the guys around the national team. I saw some good leadership on the field with some players pulling the guys into a good mentality to say, 'Come on, let’s go.'" 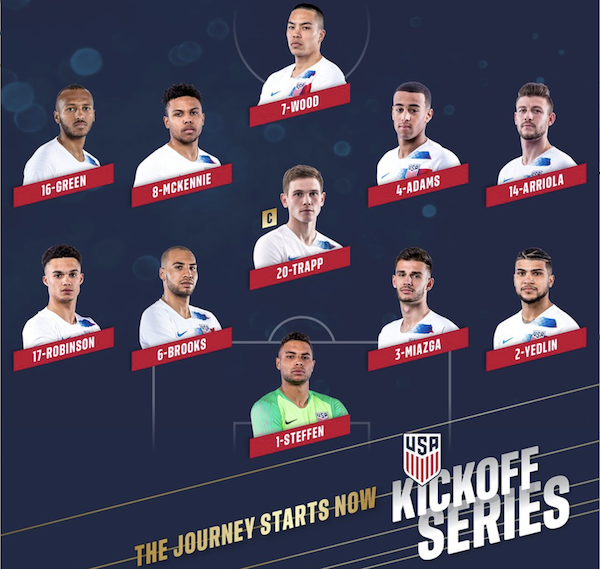 3. Connecting passes is a chore

The strong will of American players is nothing new -- it would have been a big problem if the USA had collapsed against Brazil -- nor is their glaring weakness. Lacking is technical expertise on the ball to maintain possession and creativity to create good chances.

If you looked at the shot totals from the USA-Brazil -- 12-11 for Brazil -- you'd have thought it was an even game, but the USA's chances were mostly half-chances. Possession was a more accurate reflection of the evening: 65 percent-35 percent in favor of Brazil.

“The ability to connect passes was a difficult chore for our group early in the game,” Sarachan said, “and when you concede possession against a team like Brazil, it makes it hard, you do a lot of chasing.”

Considering the problems the USA had on the wings and the lack of a playmaker in midfield, that total of 11 shots the USA recorded was probably the lone surprise of the match.

4. Pool of forwards is very thin

First, Bobby Wood up front, and then Gyasi Zardes saw little of the ball and weren't factors in the game.

If a few young players, most notably Tyler Adams and Weston McKennie, have emerged in midfield in the last year, the USA has few options up front. Tim Weah and Josh Sargent both have promise, but they are only 18 and fighting to earn first-team minutes. If says something about the current pool of strikers that Jozy Altidore remains the best player by quite a wide margin.

“Scoring goals is hard," said Sarachan. "We don’t have a plethora of forwards in our pool, that’s an area where we still need to improve the position. When you start adding in some other players as we move along, that maybe can help. Whether it’s Christian [Pulisic], whether it’s a guy like Jozy down the line…but it’s still an area where we need some depth.”
international, men's national team
22 comments about "USA-Brazil: Any positives outweighed by inability to connect passes and problems up front".
Read more comments >
Next story loading