USA wins the psychological battle again, but now what?

The USA's 1-0 victory over Mexico on Tuesday night in Nashville followed in a long line of successes against El Tri in friendly games.

Those games are all in the past, though.

In a battle of rebuilding teams -- only five of the 22 starters had ever previously played in the USA-Mexico series -- the 68th meeting between the USA and Mexico was effectively decided when 24-year-old forward Angel Zaldivar, playing his third game for Mexico, was sent off for a crunching tackle on U.S. captain Wil Trapp in the 67th minute. The red card followed a verbal exchange minutes earlier between U.S. defender Matt Miazga (6-foot-4) and Mexican playmaker Diego Lainez (5-foot-6).

With an extra player, the USA quickly took advantage, scoring the game's lone goal four minutes later when Kellyn Acosta found Antonee Robinson down the left wing, and Robinson played the ball back to the trailing Tyler Adams, free to slot home the ball past Mexican keeper Hugo Gonzalez, one of four El Tri starters making their international debuts.

The USA won the psychological battle but what else?

Almost 11 months after Couva and the 2-1 loss to Trinidad & Tobago that knocked the USA out of the 2018 World Cup, the national team remains a work in progress in so many ways.

U.S. Soccer only recently hired Earnie Stewart as general manager, no decision on a permanent replacement appears to be in the offing, and the team continues to muddle through on the field.

Is the USA ready for the 2019 Gold Cup or qualifying for the 2022 World Cup? No. With more games will come experience. But there is no evidence yet that the soccer will be good enough.

Most of the positives that the players showed are nothing different that those qualities of generations of national team players before them.

On a team without a vocal leader, Miazga stepped up, mouthing off and irritating the young Mexicans no end. (Footage of Oguchi Onyewu's iconic stare-down with Jared Borgetti in the 2005 Dos a Cero was quickly dug up.)

Burned on Brazil's opening goal, Robinson put a rough outing on Friday night behind him and came off the bench to do what he does best and that's serve a quality cross. And in a game that went from ragged to frantic in the second half, Adams showed composure under pressure, waiting back to find space in the penalty area for an easy goal.

As Miazga pointed out afterwards, it's easy to forget that Adams is still only 19 until you look at his baby face. U.S. coach Dave Sarachan said he was pleased with Adams' growth with the ball.

"We know he can run and cover ground and win tackles and compete," he said. "But at the next level, can you have a presence with the ball in picking your spots? It just keeps getting better. It's not perfect, but I think he's shown that he's emerging. Everyone's starting to look up to him a little bit. When the game was getting crazy, Tyler was trying to calm it down."

With Zack Steffen in goal, Miazga at center back, Robinson at left back, Adams in midfield and Tim Weahrunning around somewhere up front, some promising new faces -- none older than 23 -- have emerged in the last 11 months. 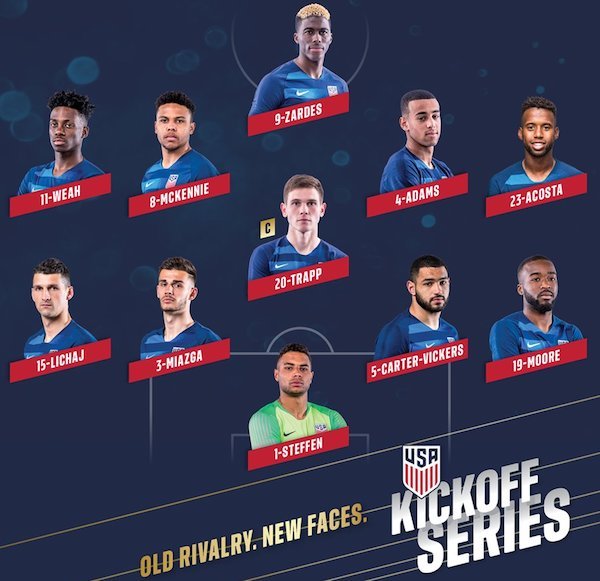 Afterwards, Sarachan said he was proud of "a real collective effort from the first guy to the 22nd. As a staff, what else can you ask for?" He said he's preached to his players about building a team identity, a not insignificant goal considering the team's youth.

"We nitpick on the technical side," he added, "but you saw a team tonight that played aggressively, competed hard and won most of their duels. I think that's been a constant over the time I've had the group and over the past two games against Brazil and Mexico."

The problem, of course, is that it's not "nitpicking" to address the technical side. When Sarachan says as he did after the game that the play on the ball was "a little better" but "still an area to improve," he was dancing around the issue.

Time and again in the first half, in particular, U.S. players failed to complete passes or hold the ball. It was only when the game fell apart and Mexico went a man down did the game open up for the USA to take charge.

For all the promise of central midfielders Weston McKennie and Adams -- one a Bundesliga starter at the age of 19, the other likely headed to Germany at the same age in January -- they struggle mightily to take control of the game when playing together.

Things will improve -- they have to. Sarachan started two European-based players -- Cameron Carter-Vickers and Shaq Moore -- who changed clubs on loan but have yet to play a game this season for their new second division clubs, and a third player -- Weah -- who hasn't dressed for his team, French champion Paris St. Germain, for the last two games. That can't continue.

Yes, the soccer should improve when Christian Pulisic and perhaps Darlington Nagbe return to the lineup. A player like Jozy Altidore can add a presence lacking at center forward.

But the USA can't rely on winning the psychological battles if it's to succeed.