MLS Focus: No BWP, no Tyler Adams? No problem for Red Bulls in biggest game of the year 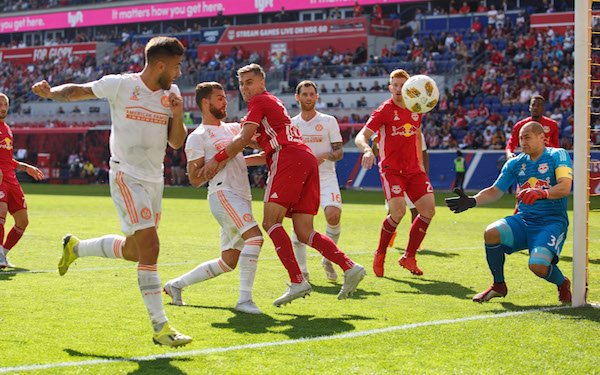 The New York Red Bulls moved to within one point of Atlanta United in the battle for the 2018 Supporters' Shield with a thoroughly deserved 2-0 win over the Five Stripes.

The Red Bulls were playing without their two best players -- Bradley Wright-Phillips (suspended for yellow-card accumulation) and Tyler Adams (bad back) -- but dominated Atlanta for their biggest win since Chris Armas took over as head coach for Jesse Marsch, who moved to Germany as an assistant at RB Leipzig.

"We can take pieces out and plug pieces in, and it looks the same," said Armas. "Today we were hoping maybe it can galvanize our team and you get energy from it and say hey, we can all step up a little more. Which they did. So I think that says a lot about our club and it's just a big demand all the time to say, it's easy to talk, but for the guys that show up and perform the way they did was most impressive."

The Red Bulls rattled Atlanta with their pressing game -- a trademark under Marsch -- and goals came from Daniel Royer with his 11th goal of the season from the penalty spot in the 39th minute and Tim Parker with 16 minutes to play.

"Both in transition and with challenging the back line," said Armas, "we were able to put pressure on their backs and up the field to minimize the amount of times we got caught the other way."

"With Tim and Aaron, you can see why they can be regulars on the national team," said Armas. "They can run, they fight, they have courage, they're good in the air, they can step in front, they can win foot races. And then with [Murillo], he shows a quality that he has on a day like today in one-on-one situations, that his urgency level keeps growing and understanding. And Kemar, we said it recently, as we locked him up for a few years [with a new contract], how much he prides himself into developing."