Reffing according to the score?

I’ve written about non-competitive games before -- Why So Many Non-Competitive Games? & Preventing Lopsided Scores -- and there remain too many in soccer. 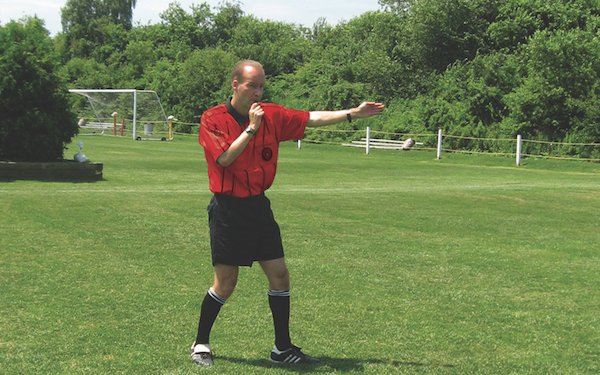 Youth soccer organizers need to realize that it does not benefit anybody to schedule a Division 1 team against a Division 6 squad, such as in cup games, tournaments or futsal leagues. Thankfully, I rarely see the winning team trying to run up the score against an overmatched opponent as they almost always show some compassion to that team.

As many people realize that I’m an experienced official, often the winning coach asks my advice on what to do to not continuously score goals.

My recommendation usually is along the lines of playing back to the keeper at the start of possession, playing low-pressure until around the halfway line so the overmatched team can establish some possession and hopefully gain some confidence, or shoot only with the weaker foot. I’m less thrilled with something that looks obvious such as only scoring on headers and am kind of neutral on playing with fewer players as that’s less participation in the game and that can look obvious too.

Sometimes before these games, I am asked by coaches of an overmatched team to help their team. “Ref, the other team is so much better than us so I would appreciate it if you help us out” and “We only have nine players show up today so I would like your assistance to keep this game from getting out of hand” are actual comments that I’ve received before matches.

I’ve not won friends this way with the losing coaches. One memorable comment came after the end of a 11-0 game played in the girls U-14 age group. With the game in the last minute, as the winning team was going toward the goal, a defender of the losing team tripped her outside the penalty area. I blew my whistle and gave the free kick, which was not scored.

After the game, the losing coach said to me as I was leaving the field, “Ref, we’re getting blown out so why did you call a free kick against us at the end of the game?”

So I responded to him, “And if I did not whistle that trip and the fouled player then retaliated by deliberately fouling the player who tripped her, whose fault would that have been?” It would have been mine as I did not enforce the rules.

Summarizing, referees might certainly feel some compassion to an overmatched opponent but we cannot let this influence our decisions as it will be our problem should game control suffer when we don’t enforce the rules.

5 comments about "Reffing according to the score?".
Read more comments >
Next story loading