In an entertaining 4-2 Colombia win over the USA, the Americans contributed a little bit to the fine display of soccer. Two goals in three minutes, by Kellyn Acosta and Bobby Wood, gave the USA a fleeting 2-1 lead. But Colombia responded by playing even more impressively than when it took a 1-0 first-half lead. Los Cafeteros struck three minutes after Wood's goal and twice more by the 80th minute. 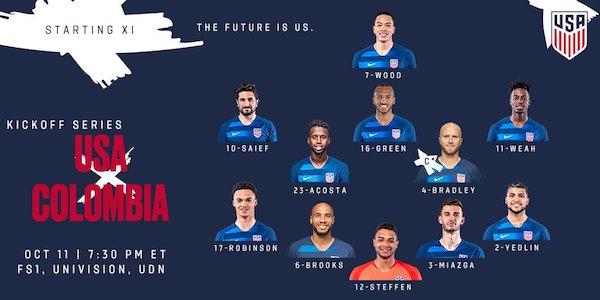 4 DeAndre Yedlin (Newcastle United/ENG) 55/0
The right back didn't have too much to do because Colombia was busy picking on Robinson on the other side. And he offered little going forward: one cross that David Ospina punched away.

4 John Brooks (Wolfsburg/GER) 35/3
Provided too much space for Colombians and didn't hit his usual decent mid-range passes out of the back.

5 Matt Miazga (Nantes/FRA) 10/1
Beaten to ball by Carlos Bacca on the second goal. Slid in front of the goal line to block James' close-range shot in the 41st minute.

2 Antonee Robinson (Wigan Athletic/ENG) 5/0
The young England product was worst player in the first half, getting roasted by Colombia's right flank players and passing poorly. Then he delivered the cross that Acosta finished for the 1-1 equalizer. But it went south again. Burned by Santiago Arias -- after a throw-in -- on Bacca's 2-2, tricked by Bacca on the 3-2 Falcao goal, and yet again let Arias through during the sequence on the fourth goal.

3 Michael Bradley (Toronto FC) 141/17)
The captain's comeback did not go well. His pass to Robinson on the first goal stood out because it was such a rare example of Bradley serving as the link one expects him to. He played as a very defensive midfielder, and that didn't go well either. When Colombia scored on a post-corner kick counterattack, he slowed down at the center circle and failed to notice Falcao run past him. Also lucky that Juan Quintero hit the crossbar after getting juked.

6 Kellyn Acosta (Colorado Rapids) 20/2
His goal was especially impressive in that he ran from his own half to meet the cross to stab home.

5 Tim Weah (Paris Saint-Germain/FRA) 6/1
After a poor first half, which included an aimless pass from the wing after a rare promising counterattack, he served a perfectly timed pass as three defenders converged on him that allowed Wood to dart between two other defenders and score the go-ahead goal.

6 Julian Green (Greuther Fuerth/GER) 13/4
The most active attacking midfielder -- the Colombians fouled him four times -- he stole the ball from Mateus Uribe near the center circle and sent Weah down the wing to set up Wood.

4 Kenny Saief (Anderlecht/BEL) 3/0
The left-sided midfielder earned a free kick in a relatively dangerous area on the wing, then struck it horribly.

6 Bobby Wood (Hannover 96/GER) 42/13
That the lone striker didn't get any first-half service didn't discourage him. He hit the grass after an Uribe tackle in the U.S. half, but popped up and sprinted 60 yards to finish Weah's pass.

Substitutes
3 Fafa Picault (Philadelphia Union) 2/0
He played a bit more than a half hour, but you wouldn't have noticed.

TRIVIA: The 23-year-old Zack Steffen's sixth cap ties him with most caps for a U.S. goalkeeper during his debut year with Kasey Keller (1990) and Troy Perkins (2009).