The USA qualified for the 2019 Women's World Cup with a 6-0 victory over Jamaica on Sunday night at the Concacaf Women's Championship, joining Canada, a 7-0 winner over Panama, as the first two Concacaf teams to qualify for next year's tournament in France.

In each of the four games at the Concacaf Women's Championship, the USA's willingness to direct an all-out assault on its opponent has resulted in an early goal, usually with the complicity of the opposing defense.

The Jamaica game was no different. A cross from right back Kelley O'Hara was poorly cleared, and the ball fell to the feet of Lindsey Horan. Her shot was stopped by Sydney Schneider, but Jamaica's young goalkeeper from New Jersey via UNC Wilmington couldn't get to the rebound, allowing Tobin Heath, sitting on the doorstep, to put away the rebound for the USA's fastest goal yet at less than two minutes played. 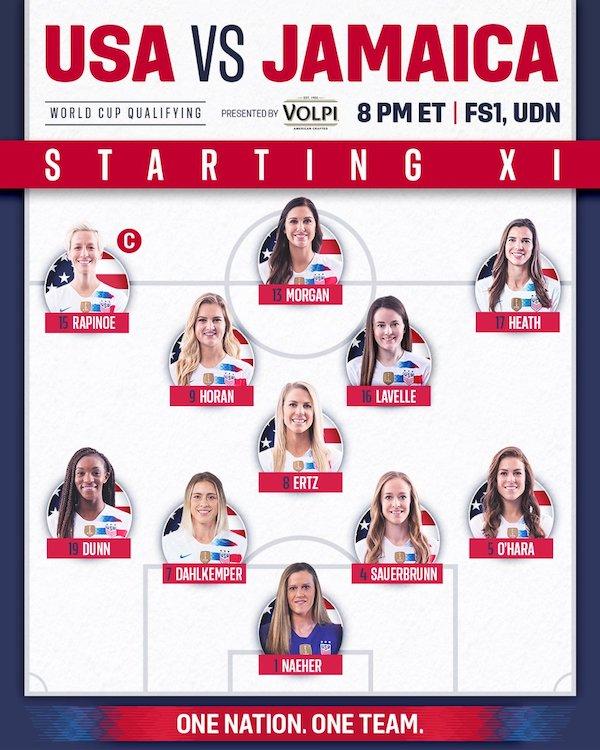 Heath's goal was emblematic of the USA's efficiency that often escaped it earlier in the tournament. She put away a rebound she could have easily skyed over the goal.

In the third group game, the USA outshot Trinidad & Tobago, 59-0, but only managed to put 22 shots on goal and win, 7-0. Against Jamaica, 17 of the USA's 26 shots were on target, and score was 5-0 after only 33 minutes. It helped that players were put through for great looks in front of goal.

A long ball from center back Abby Dahlkemper on the left side found Megan Rapinoe, and the left winger raced in and fired an angled shot that Schneider couldn't stop from close range. Later in the first half, Horan chipped the ball over the Jamaican backline to Heath, her teammate at Paris St. Germain and now Portland in the NWSL. Heath collected the ball in the air and scored with a volley.

The play of Julie Ertz, Rose Lavelle and Horan in midfield gives the USA a dimension it has never had -- physical dominance plus skill and vision to control the tempo.

In recent years, the USA has most often relied on the individual brilliance of Mallory Pugh, Rapinoe and Heath to make plays. Those balls Dahlkemper and Horan played in the first half were possible because the USA so totally dominated -- again -- in midfield.

Ertz, Horan and Lavelle have started together just five times -- three times so far in the Concacaf championship. The real test, of course, will come next summer in France, but between now and then, the Ertz-Horan-Lavelle should get a lot of reps.

Next up. The USA and Canada will play for the Concacaf title on Wednesday. In the first game of the doubleheader in Frisco, Jamaica and Panama will play for third place. The winner will clinch the third Concacaf berth while the loser will move in a two-game playoff against Argentina, South America's No. 3 team.