U.S. women's view from top: It's only the starting point

Where do U.S. women go from here?

A little more than seven months out from the 2019 Women's World Cup in France, they are on top of their game. Consider this ..

What is most impressive is who the USA has played in 2018. It has beaten nine opponents headed to the World Cup: Brazil, Canada, Chile (two times), China, England, Germany, Jamaica, Japan and Mexico (three times). Its only ties were against Australia, which will be one of the darkhorses next summer, and host France.

Yes, the opposition at the Concacaf Women's Championship was weak. The USA played the second-, third- and fourth-place teams at the tournament and beat them 2-0, 6-0 and 5-0. Jamaica is going to the Women's World Cup for the first time, but the USA led the Reggae Girlz, 5-0, after 33 minutes.

That doesn't take away from the fact the USA has what shapes up to be a special team with a magical midfield in Lindsey Horan, Julie Ertz (photo) and Rose Lavelle. And it has all the pieces in place ahead of time. Which wasn't the case four years ago. 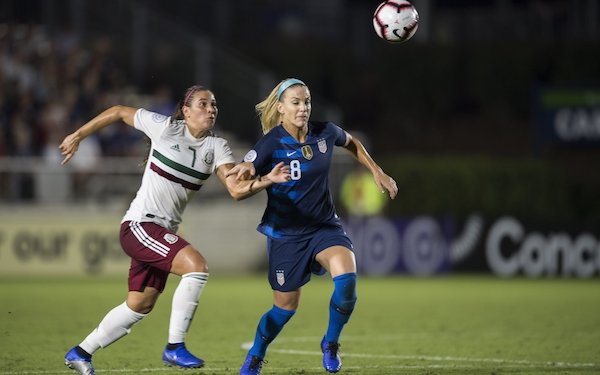 The USA romped to its third world title with a 5-2 win over Japan in the 2015 Women's World Cup final, but it was very much a work in progress up until the semifinals in Canada.

U.S. Soccer changed coaches after the Algarve Cup in April 2014, firing Tom Sermanni and replacing him with Jill Ellis. But even as late as February 2015, four months before the World Cup, the USA was run off the field by France in Lorient.

Ertz wasn't inserted into the starting lineup -- at center back -- until the Algarve Cup in March 2015. And the USA didn't come together at the World Cup until Ellis settled on her central midfield in the 4-5-1 formation -- Lauren Holiday, Morgan Brian and Carli Lloyd -- and Alex Morgan -- who was coming off a knee injury -- as the lone striker.

This time, Ellis has two things going for her: her lineup is set, and every key player is healthy (with the lone exception of Stanford defender Tierna Davidson). That's the scary part -- things can only go wrong from here.

After Wednesday's Canada game, Ellis insisted there is still room for improvement.

“It feels like a starting point in terms of where we want to be,” she said. "Every game we’ve played this year, it’s about preparing us for next summer. We can get better in every facet. To get this done, we certainly have to continue to make strides.”

There won't be much time for that. This is how the schedule shapes up between now and June 7 when the Women's World Cup kicks off: