On Friday evening I was in Eintracht Frankfurt's Waldstadion watching them beat Fortuna Düsseldorf 7-1, the club's biggest win in the Bundesliga for almost 40 years. Serbian striker Luka Jovic  became the first-ever Eintracht player to score five goals in a single Bundesliga game. Yet despite all the euphoria, there was plenty of room among home fans for another major topic of discussion -- the astonishing press conference given by Bayern Munich's front office earlier in the day to name and shame journalists whom it claims are writing about the club in a "disrespectful and outrageous" manner. 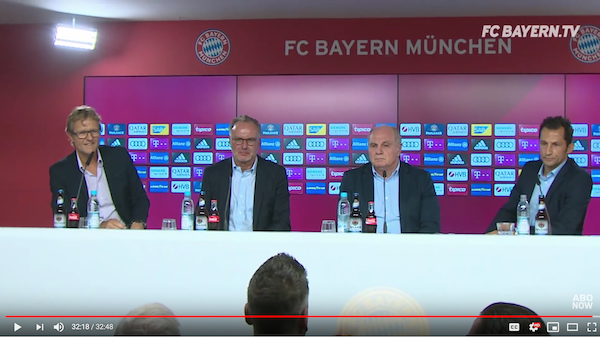 Bayern may be a well-regarded name in the increasingly brand-oriented world of international club soccer. Outside of their home state of Bavaria, though, they are about as popular among domestic fans as all-seater stadiums and Monday night kickoffs. That is, they are not popular at all. You can argue that the general contempt for Bayern is born either of envy at their success (they've won the last six Bundesliga titles), or of the club's perceived arrogance and domination of a league where they have a habit of buying up the best talent. The last player to be nurtured through their youth ranks to a long and successful first team career was Bastian Schweinsteiger.

That air of arrogance is more often than not conveyed by the club's chairman, Karl-Heinz Rummenigge, and its president, Uli Hoeness, both highly successful Bayern players in their time, but nowadays prone to sounding off about anything that tweaks their ire and doesn't suit Bayern's goal of total supremacy. It was Rummenigge and Hoeness who called Friday's press conference at short notice, and then proceeded to indignantly lambast the assembled journalists for their coverage of the team over the past few weeks, when Bayern had (crisis alert!) lost two and drawn two of their previous four games.

It's true that in this age of sporting super-hype, the soccer press has a habit of wildly over-exaggerating a major club's poor run as "a crisis." Yet the clubs themselves are partly to blame for this. It is their increasing greed for extra revenues and an obsession with international self-branding that leads them to sell themselves as something more than they really are -- a mere soccer club. When bombastic media reports don't suit them, it's poor form to then come out flailing and whining as Bayern did on Friday.

The soccer monthly 11 Freunde labeled the duo's performance, together with that of technical director Hasan Salihamidzic, as "thin-skinned, insecure and small-minded." Even the reserved kicker magazine called the presser "extraordinary" and headlined the "double standards" of the pair's behavior. Rummenigge's quoting of the German constitution to claim that the players' human rights were being attacked was seen as particularly risible. His defensive use of the oxymoron "false facts," meanwhile, called to mind the worrying political trend for incitement against journalists by labeling them all as liars.

I texted a Bayern-supporting friend to find out what he thought. "Head of comms should be fired," he messaged back immediately. It was indeed hard to fathom what the thinking was behind the whole event. To provoke the rest of Germany's fan community to hate Bayern even more? That's probably impossible. To provide comic relief? The hypocrisy of Hoeness certainly made for some dark humor, given his own regular views on players like Mesut Ozil ("rubbish"), Karim Bellarabi ("mentally ill"), and former Bayern defender Juan Bernat ("he played like a pile of shit" in the Champions League). This latter somewhat disrespectful remark actually came in the course of Friday's presser.

Yet among Frankfurt fans, the reaction to Bayern's public self-immolation was not necessarily one of glee, but more one of bafflement. How can such a successful and habitually professional club have voluntarily stood in front of the media and shown itself up as paranoid, super-sensitive and, for want of a better phrase, utterly pathetic?

The Bayern bosses had particularly pinpointed the age-centered press criticism of goalkeeper Manuel Neuer, the central defenders Mats Hummels and Jerome Boateng, and the wingers Arjen Robben and Frank Ribéry. World-class players all, but collectively showing signs of age or, in Neuer's case, a failure to return to his pre-injury form. Yet it's entirely legitimate for the press, and everyone else too, to wonder in the face of sub-standard performances if certain players are past their prime, especially given Germany's lackluster showing at this year's World Cup.

Perhaps subconsciously Rummenigge and Hoeness interpreted the reports of their creaking defenders and slowing wingers as criticism of themselves. After all, they have been in charge at Bayern for a long time, the jail term of Hoeness for tax fraud notwithstanding. Pricked by self-doubt, the two men lashed out, ironically leading observers to wonder if they are indeed still fit for office. And more embarrassingly still, unleashing a whole new wave of thoroughly justified press criticism.