Dan Flynn, the most powerful man in American soccer you've never seen, will be stepping down after 18 years as U.S. Soccer's CEO and secretary general, the Washington Post's Steven Goff reported on Monday. Flynn, 63, will step down next year, sources told the Post. 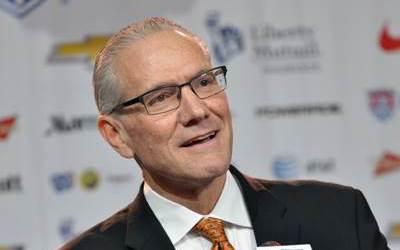 Flynn was named to the position in June 2000 when the U.S. Soccer was in a precarious financial position, but it is now one of the largest national governing bodies in American sports. At Friday's board of directors meeting, the directors were told the federation has a deficit of $9.2 million for the fiscal year to date, but it has reserves of $150 million, including funds in its own accounts and donor and USOC accounts.

Flynn grew up in St. Louis and played on Saint Louis University's 10th and final national championship team in 1973. He later worked for Anheuser-Busch, a longtime soccer sponsor, and served as the Chicago venue chief for the 1994 World Cup organizing committee.

Much of the growth of the federation came during the era when Sunil Gulati was U.S. Soccer president and Flynn was its secretary general. U.S. Soccer now has close to 200 full-time employees and operates with a budget in excess of $100 million.

Gulati was elected president in 2006 and stepped down in 2018 after the election of Carlos Cordeiro as his successor. Gulati was very much a hands-on president and the public face for U.S. Soccer. Cordeiro's view of the role is more in line with that of the chairman of a board of directors. The next CEO/secretary general will likely play a much more public role during a critical period as U.S. Soccer moves closer to co-hosting the 2026 World Cup with Mexico.

The federation has not commented on the Washington Post report or issued a statement about any plans for naming a successor.

In the aftermath of the USA's failure to qualify for the 2018 World Cup, the state of the national team program has come under intense criticism, and the presidential campaign to find a successor for Gulati released a lot of pent-up displeasure with the relationship between the federation and its national office and member organizations.

Because of U.S. Soccer's authority given to it by the USOC and FIFA, the organization wields tremendous power over the sport of soccer, far greater than the national governing body in sports like baseball, basketball and ice hockey. That authority is the subject of a major antitrust lawsuit pursued by New York Cosmos owner Rocco Commisso in Federal court in Brooklyn, New York.

The next CEO/secretary general will be involved in many critical decisions shaping the federation and sport: how to reshape the fractured youth soccer landscape, how to get the men's national team back on track and keep the women's national team as the best in the world, how to maximize the federation's commercial potential -- the SUM question -- and to promote the sport in the buildup to the 2026 World Cup.