Like many players on the United States men’s U-20 team, midfielder Alex Mendez  is at a very important period in his career. He recently signed his first professional contract with SC Freiburg and is currently assembled with the U-20 team in Florida ahead the Nov. 1 World Cup qualifying opener against Puerto Rico.

But the 18-year-old Mendez has enjoyed a steady rise in 2018 for both club and country. At the upcoming World Cup qualifying campaign, he is expected to be one of the team’s most important midfielders. After the team’s first full day of practice, the Los Angeles native is upbeat.

“When I first came into this team, I saw the players and was like: dang, am I going to be able to even be on this team? Those are thoughts you get in your head,” Mendez told Soccer America from Florida. “Then you think more about the players and that this is just a great team. All around, it's a very deep team. The players can all play different positions.”

Like many players on the U.S. team, Mendez is versatile and can play any number of positions across the midfield. That is going to be particularly useful for Coach Tab Ramos as the grueling format of the qualifying tournament will have the team play five games over just nine days for the opening group stage.

Mendez can help Ramos fit in any number of places, but his primary position will be as the No. 8, box-to-box role.

“On this team, I play as a No. 8 and I really like it on this team because there are players on this team that can penetrate balls to me and we're all connected and understand each other. I feel comfortable in that position.” 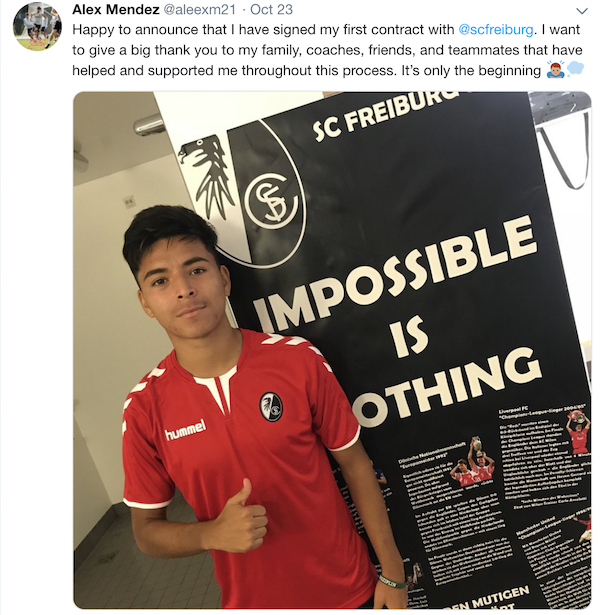 One of the keys to the U-20 team’s success at qualifying and possibly beyond will be Mendez’s chemistry with Brandon Servania, the recent FC Dallas homegrown signing who trained with Bayern Munich for 10 days earlier this month. Servania is also a versatile midfielder but is currently playing the No. 6 defensive-midfield position as Chris Durkin was not released by D.C. United.

Mendez understands how important his chemistry is with Servania and believes it is progressing very well. Servania echoes that feeling and looks forward to showcasing that in the weeks ahead.

“Alex is a great player,” Servania said. “My first time playing with him was last camp, I was surprised. Some of the younger guys were a little bit nervous but he came in confident about what he could do. He's super shifty and he has a great technique. He's great to play with. He knows when and where to be in order to combine with him. He's a great player.”

Even with the U.S. team shorthanded with many top players not released by their clubs to participate, the consensus is still that the United States and Mexico are the favorites to meet in the final on Nov. 21 in Bradenton.

If such a scenario plays out, it will be an eye-opening experience for Mendez, whose parents were both born in Mexico. In recent years, much has been made about the need for U.S. Soccer to increase its role in the Mexican-American community.

The decision of Galaxy youth star Efra Alvarez to represent Mexican youth teams and defection of rising star Jonathan Gonzalez from the U.S. setup to Mexico only intensified this discussion.

Still, there has been an increasing presence in recent years of Mexican-Americans on U.S. youth national teams and Mendez is happy with his relationship with U.S. Soccer. The thought of playing Mexico in a final is something that he relishes.

“I don't want to say I would have to prove something, but it'll be an emotional match,” Mendez said of the possibility of playing Mexico given his heritage. “It'll be like: 'wow, those are my roots.' … My parents have told me: 'We're Mexican, you're American, what do you like?’ But obviously U.S. Soccer opened its doors for me and I am really grateful for that. They have been really nice to me and I don't see why I'd be switching to Mexico. It's great here. I like it.”

Following the World Cup qualifying tournament, Mendez will return to Germany and resume his career with Freiburg, where he will begin playing for the club’s youth teams.

His recent decision to sign with Freiburg came on the heels with him playing for the LA Galaxy’s academy for three years and seeing action for LA Galaxy II in the USL. The decision to move abroad as opposed to signing for their MLS team is one that many top young Americans face. It is an issue for the league as well when its best developed talent leaves for free.

While some Americans, like Servania, will sign with their academy’s parent club, others like Mendez will explore options abroad. And Freiburg stood out from a number of other European teams he considered.

“It was definitely a tough decision,” Mendez explained about leaving abroad. “I was deciding whether or not I wanted to stay here with my friends or family. I was used to what I had to go through here. It's a different environment with the Galaxy. But every kid, I can imagine, hopes to be a Champions League player or in the biggest leagues in the world. I just felt that the opportunity was there. I thought: take it and give it your all.”

“When I first got there to Europe, I went to Freiburg first,” he continued. “I never realized how much Freiburg did for me until I went to the other clubs. When I got to the other clubs, it wasn't the same. I felt distant from the other players. I felt this wasn't going to be for me. Comparing them, Freiburg felt different -- in a better way. Day to day, they communicated with me better.”

For now, however, Mendez is simply focused on the U.S. team. He knows that this tournament will be the first chance many American fans will have to see him and he wants to help the team qualify for the U-20 World Cup next summer in Poland. The USA team has advanced to the quarterfinals the last two cycles.

Mendez wants to keep the momentum going but knows that part of the challenge of it will be that opponents will save their best for games against the USA. For Mendez, that is part of the fun that awaits in the weeks ahead.

“I wouldn't say it is pressure,” Mendez said “But it's in the back of your head that you're the defending [Concacaf] champion, teams are going to come out and play harder just because you're the United States. It's a challenge.”