A snap shot of professional leagues

Whenever soccer in this country is compared to another country’s soccer, people start telling you that the USA is too big and too populated to be considered as a country for comparison, but rather it should be looked at as a continent. True but I believe it is yet another rationalization for American exceptionalism. Today we will look at the structure and quantity of professional soccer leagues in the USA and a few leading European countries without forgetting the size of the USA.

Let us start with numbers: There are a total of 60 professional soccer teams in the USA at this time and point in history. Nine NWSL teams plus 20 MLS (plus three Canadian teams) teams plus 31 USL (plus two Canadian teams) teams get you to 60 unique teams: Nine women’s and 51 men’s professional teams. Unfortunately, on the men’s side we are talking about 47 unique clubs since some of the USL teams are actually second teams of MLS.  I left the MLS-affiliated teams out of the formula. Are nine women’s clubs and 47 men’s unique clubs sufficient quantitatively for a country with a population of 327 million and a registered player base of four million? An affirmative answer is difficult to give especially considering that many of our young players go to Europe playing for mostly second tier professional teams.

Before talking about future expansions and the structure of the leagues, let us compare the number of professional teams in some European countries and their populations.

Germany has a population of 82 million with 56 professional men’s teams in three tiers.

Spain has a population of 46 million with 122 men’s professional clubs in three tiers.

Since women’s professional soccer is pretty new in Europe, the number of professional women’s leagues and clubs are of less importance for a comparison. NWSL is also a new league; established in 2013. It is a followup of other professional women’s leagues that have folded. U.S. Soccer both organizes the league and partially supports it. The success of U.S. women's national teams and its dominance of women’s soccer in the world are based on Title IX and its positive impact on the college game. NWSL’s main resource for players is the colleges. The sustainability of the dominance of the U.S. women's national team in the coming years is very debatable and is worthy of another article. Now we will go ahead with our discussion about men’s professional leagues.

Clearly the correlation between the population of a country and its number of professional teams is rather a weak one. The success of the leagues depends on the volume of the broadcasting rights and the success of its clubs in international competitions like the Champions League. I personally do not think that average attendance is a primary yard stick for success.

We have to look at the structure of the European Leagues to see how or whether we can improve our leagues both quantitatively and qualitatively.

For those of you who do not know much about European league soccer structure, let me summarize. In each country, there is a pyramid of leagues. Starting with amateur leagues going into semi-pro leagues (in some countries there are no semi-pro leagues) and eventually into the professional leagues. All leagues – except the top few tiers in some countries – are organized and run by the federation or its member regional associations. In England, Germany, Spain and Italy that we mentioned above the top leagues are run by the leagues themselves (in England the EPL runs the top league, the Football League the next three tiered leagues). On the other hand, in Turkey all four professional tiers are run and organized by the federation. There is a general trend in Europe to allow the top tiered professional leagues run the leagues themselves under the jurisdiction of the federation.

All clubs from amateur to professional leagues move up and down the pyramid via promotion-relegation. So it is possible for an amateur club in the lowest division to eventually play in the top professional league of the country. While being successful on the field and moving up, they generate more revenue through better sponsors and drawing more crowds for their games. If a club is to be promoted they also have to satisfy the standards of the upper league defined by the national licensing system. If they cannot, the next one in the standings is given the chance to get promoted.  This is how things are structured in European soccer league systems. The same principles apply to all team sports in Europe. So this is the team sports league culture of Europe. Needless to say, in this culture success on the field is the primary motivation. As Kuper and Szymanski clearly state in their book Soccernomics “Soccer is neither big business nor good business”. The best way to describe soccer is as passion and that is how it is perceived in Europe. 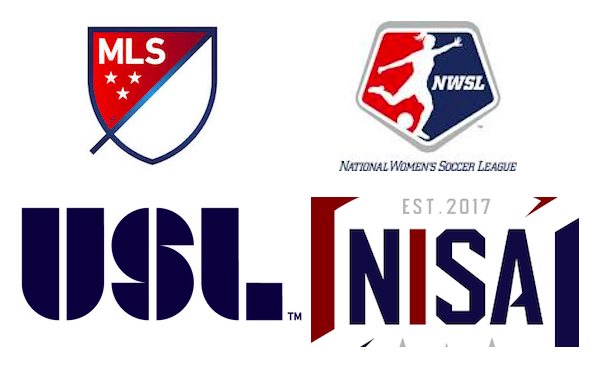 Let us come to this side of the Atlantic: After a number of unsuccessful professional “adventures” including the “passionate” NASL (1968-84), MLS was formed in in 1996 to satisfy FIFA’s prerequisite of awarding the 1994 World Cup to the USA. Following the other professional league models professional soccer in the USA, they chose not to adapt the European league model. U.S. Soccer chose not intervene and actually even helped the formation of the unique MLS model. In the 1990s, the concern was to establish a league that will stand the test of time and money. MLS’s primary motivation has never been to be an incubator for the development of American players.

MLS operates under a single-entity structure in which teams and player contracts are centrally owned by the league. Each team has an investor-operator that is a shareholder in the league. In order to control costs, MLS shares revenues and holds player contracts instead of players contracting with individual teams. The league is a closed league without promotion/relegation making it the third league in the world with Australia's A-League and the Indian Super League. Most MLS teams have either a second team or an affiliated team in the USL to give playing time for players who cannot play in MLS.

USL is privately owned and is currently sanctioned as a Division II Professional League by U.S. Soccer.

Both leagues will expand in the future. So the number of professional men clubs will increase from 47 upwards. By 2021, MLS wants to have added at least four expansion teams: FC Cincinnati, Nashville, Inter Miami CF and Austin FC.

USL has other plans. They are bringing three levels of soccer under one brand in 2019. USL Championship and USL League 1 are Division 2 and Division 3 professional soccer respectively. USL League 2 is actually the current PDL. PDL is a short term – summer – league and should not be considered professional soccer. Whether there will be promotion relegation in these levels is still not clear.

On the other hand, NISA wants to establish a Division 3 league with at least eight teams in 2019. Its' expressed interest in creating a league structure with promotion/relegation all the way up to Division 1.

So we will have a very fragmented professional league structure like in youth soccer.

What role does the federation play in this process? It defines the very basic sanctioning rules of professional soccer which cannot be compared to anything like the detailed national club licensing systems of Europe. For example it only defines the stadium capacity of the stadiums required in each division. The rest of the stadium criteria are left to the jurisdiction of the leagues. As a result we have stadiums with artificial surfaces that are not in compliance with Law 1 of the Laws of the Game. “The reproduction, whether real or virtual, of representative logos or emblems of FIFA, confederations, national football associations, competitions, clubs or other bodies is forbidden on the field of play….”

Another major difference between the European model and the USA model is the fact there is a seamless transition based on performance between the adult amateur and professional leagues in Europe. Such a transition is non-existent in the USA unless the amateur clubs win a big lottery!

I understand that the closed league structure is here to stay with us in the foreseeable future. I am not discussing the merits and/or evils of promotion/relegation. At this point and time only FIFA can have a say in this matter and so did its president, Gianni Infantino, at the White House recently. Even his very mild remarks met severe opposition from one of the important representatives of the establishment.

I believe FIFA missed the train since it has awarded the World Cup 2026 to the United Bid of USA, Mexico and Canada. It could have made a prerequisite like it did in 1994 for U.S. Soccer to give a timeline for transition into a league structure with promotion/relegation. I am sure now with all the big-time money in line FIFA will not poke the bee hive.

This is how the professional leagues look like from the opposing sides of the Atlantic. Clearly, like all other professional big-time team sports (football, basketball and baseball) professional soccer is seen as business by the establishment on this side of the Atlantic. The other three team sports use the athletes developed by the existing systems, they are the best athletes in their respective sports on the planet and the leagues do not have any competition internationally.

We will discuss next time what could be done in the USA so that the leagues can be used as incubators for player development. Until then….