Become a ref! It's fun, really

“I shouldn’t be doing this.”

The thought kept running through my head as I wrapped and taped my ankle just after noon Sunday. My Achilles was aching again, and the pain had spread to my plantar fascia.

I don’t know what I’m doing when it comes to wrapping my own ankle. I’m just taping various soft tissues in place so they don’t snap away like all the branches that fell in my yard when hurricane remnants blew through.

On Saturday, I coached two games and reffed two more. I was going to take Sunday off. But the emails kept piling up from our ref assignor. “Games open.” “MORE games open.” “PLEASE look -- more games open.” “NOW I’M BEGGING.”

It’s certainly not about the money. The money I’ll make for running the line at this game might pay for a co-pay for the physical therapy I should probably get. My family doesn’t need extra cash.

I should be resting. I should be wrapping up various work projects and spending time with my kids. I already had a frustrating game reffing the day before -- a U-9 rec game in which the coaches hadn’t taught their goalkeepers the rules and were relying on me to teach them rather than enforce them. (They might have a point.) And I’m spending so much time on soccer fields that I might start writing Yelp reviews on portable toilets. (I don’t care about the smell -- just please, please refill the hand sanitizer.)

But the last emails reminded us that kids were about to show up for games and find no referee to take charge. And some parents will wonder why they’re paying so much money for games that will end up with some dude recruited from the sideline to pretend to know what he’s doing as a center ref.

Those same parents may be frustrated with me anyway. I’ve been in their shoes. I’ve cried foul when the referee didn’t blow a whistle. I’ve shaken my head after seeing referees who don’t even leave the center circle. They just watch from afar, keep time and make sure a fight doesn’t break out. They’re like faculty advisers who don’t really do any work but are nominally in charge.

Today, I know that ref might be doing four games that day, and his body can’t handle running along with the play. He shouldn’t be out there. But someone has to be.

The purpose of this story isn’t to tell you to give these referees a break. We all should do that, of course.

The purpose here is to get you to take up the whistle and flags yourself.

It’s not just a case of saying, “Oh, you think you can do this job?” You probably can. You can surely outrun me down the line.

I got certified as a ref this summer at age 48. What’s your excuse, millennials? Don’t take your cues from the Barstool Sports guy who chortled about weak-minded refs quitting after dealing with week after week of abuse. If you’re such a tough guy, “BarstoolJordie,” come out here and do it yourself. You might learn something.

Obnoxious parents and coaches aside, this is a fun gig, as strange as that sounds. I’m often less stressed reffing than I am coaching. I can do my best as a coach and still have disappointed kids who lost. When I’m reffing, the kids all fist-bump me after the game. I’m part of a community of referees. I even love the gear, though I’m spending too much money on snazzy long undershirts, a new whistle, the proper socks (seriously -- why does USSF keep changing such things?) and so forth. It’s a new world that’s more welcoming than you might think.

So do it. Ask your club where to sign up. Go to training. Do your club’s rec games at first. You may find yourself, as I have, doing travel games and even elite-level games sooner than you would’ve thought.

Or maybe we’ll get enough refs that you don’t have to proceed that quickly. Maybe we’ll keep experienced refs in the game so they can do the higher-level games and leave us newbies walking alongside U-9s, gently reminding them to stay behind the buildout line and keep their feet on the ground for throw-ins.

And that will eventually trickle upward to the pro game. If you think we need better top-level referees in this country, then let’s expand the pool.

In one recent high-level game, I heard a parent behind me griping about the center ref, surely unaware that the center ref has a playing resume that would make that parent’s jaw drop. “Oh, but this game is so important!” she said. Can’t be that important if I’m working it, I thought. (I still would give myself a solid mark for that game. My positioning was solid. The parents griped with me once, and they were wrong.)

So on Sunday, I went out with some trepidation. I worry about injuring myself even more. I worry about failing to keep up with play. Actually, both assistant refs are ailing -- the other one had back spasms in his first of five games that day.

The game proceeds. It’s pretty good. Many of these players will make their high school teams in a couple of years -- a difficult feat in Northern Virginia. Some might even have a shot at college.

It’s 2-1 with about two minutes left. The trailing team is throwing everything forward. I’ve spent the last five minutes running sprints down that line. 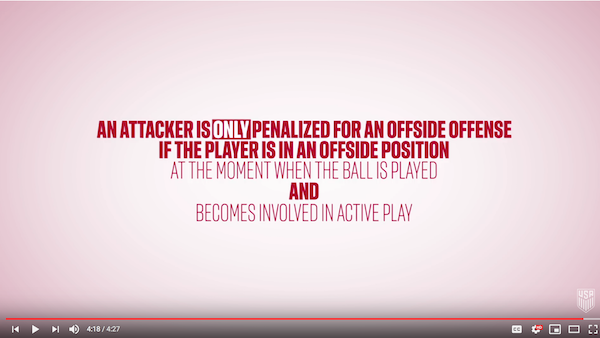 But I keep up. And I’m staring down the line at the second-to-last defender when I see a player out of the corner of my eye getting ready to play a through ball. One attacking player has drifted into an offside position, but she’s farther away from the play. Another is carefully eyeing both the space in front of her and the defenders. I hear the thump as the ball is played forward and the player breaks past the defense. And she scores.

The center ref looks at me for confirmation. I give a subtle thumbs-up as I walk back toward midfield as I was taught. My flag is down. It’s a goal.

Yeah, a parent is mad at me. The opposing coach gently inquires at the end of the game, and the center ref explains what I told him -- the player in an offside position didn’t interfere with play. (See page 97 of FIFA rules.) The ball didn’t get to her, she wasn’t near the goalkeeper’s vision, and no defender was marking her instead of the player who scored. And the player who scored was on.

The coach graciously accepts the explanation, and I feel quite confident VAR would back me up if it existed in mid-level travel soccer.

Because I was right where I should be. On that play. On that day.

Come out and join me. Or give me a day off.