FIFA's decision to double the prize money for the Women’s World Cup from $15 million in 2015 to $30 million in 2019 and add another $20 million in funding related to the tournament was met with renewed criticism that it did not to enough to address the inequality in funding for FIFA's men's and women's championships.


Goal line pushed back. FIFpro, an umbrella organization for players' unions around the world, said the gender gap will have grown $27 million from World Cup to World Cup.

“FIFPro notes the willingness of FIFA to increase prize money for the Women’s World Cup and make structural improvements to support women’s football," it said in statement issued after the FIFA Council approved the moves at its meeting in Kigali, Rwanda, "However, despite these changes football remains even further from the goal of equality for all World Cup players regardless of gender."

National players' unions highlighted the discrepancies between payments to men's and women's teams. Champion France received $38 million for winning the 2018 World Cup, more than the 24 teams at the 2019 Women's World Cup will receive combined. The winner of France 2019 will receive $4 million, double what U.S. Soccer received when the national team won Canada 2015. 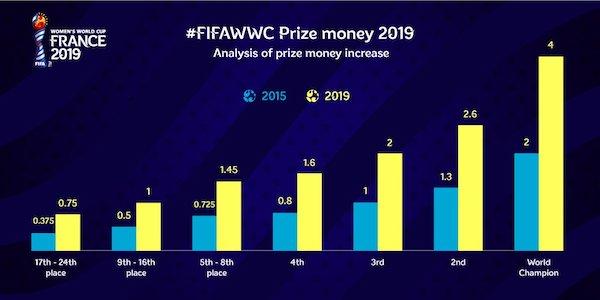 “The USWNT Players Association is thankful for the women and men who tirelessly work on a daily basis to advance women’s football within institutions like FIFA and U.S. Soccer, as well as within fellow unions like FIFPro and its members,” it said in a statement.

“The common objective of all these institutions -- both management and labor -- is ultimately to grow the game. Substantial investment is required to overcome generations of inequality and discrimination in the women’s game, to make football the world’s preeminent sport for women and girls.

“We are committed to ... have continuous dialogue around how FIFA and U.S. Soccer can fulfill their respective statutory obligations of gender equality, including the prize money for the 2019 World Cup, which is an area we feel immediate and impactful investment can be made.”

FIFA president Gianni Infantino positioned the 2019 payments as an increase of more than three times FIFA's outlay in 2015. Another $20 million will go to cover preparation costs and reimburse clubs for the time their players have been released for the tournament.

Preparation support. The $11.5 million for preparation costs will help federations that traditionally spend little on gathering their women's national teams.

In 2015, Nigeria, which has played in every Women's World Cup, played its only warm-up a week before the tournament started at Toronto FC’s training facility. Ivory Coast and Cameroon also played just one game -- against each other -- before their first trip to the Women's World Cup.

Cameroon, which is preparing for African qualifying in November, recently played a rare friendly against France in Grenoble, but seven Indomitable Lionesses and their coaches and staff didn't even arrive in France on an overnight flight from Cameroon until the morning of the game because the processing of their visas was delayed.

NWSL boon. The $8.5 million in payments to women's clubs is similar to the club benefits program for men's clubs. They are paid for every day one of their players is at the tournament, starting two weeks before the opener until the day after the player's team is eliminated.

The women's payments program should be a boon for NWSL teams, considering the number of players who will be at the Women's World Cup and the length of time the USA, which will be the favorite, could be in France. It's not inconceivable the nine NWSL clubs will receive upwards of $1 million.