Over the last year, U.S. interim head coach Dave Sarachan has introduced a new core of players into the team. Most of the players are young and have enjoyed a lot of success very early in their careers. On the opposite side of the spectrum, there is newly capped Aaron Long, the front-runner for 2018 MLS Defender of the Year honors, but whose career almost seemed as if it was never actually going to take off. 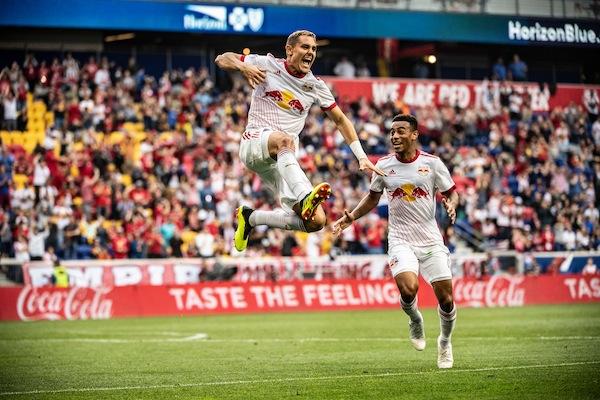 Long, 26, has had a lot of success in 2018. His partnership with his good friend Tim Parker for the New York Red Bulls has helped to create the best defensive contingent in MLS. In Octobber, he stood out in his U.S. national team debut during a 1-1 draw with Peru in a friendly in Hartford.

Such success, however, never seemed as if it was going to happen at one point. After being drafted by the Portland Timbers in 2014 following a collegiate career at UC Riverside, he was released a few months later. He moved to Seattle where he played with the Sounders FC 2 and lasted just a season with the USL squad. Then in New York, he had to start with the Red Bulls II in 2016.

“I don't know if I doubted this was possible,” Long told Soccer America in New Jersey. “I always believed in my abilities and I always thought when I was in college that one day I could play for the U.S. national team. But I knew I would have to work hard and everything was going to have break my way. But at some points it certainly seemed very far away. The likelihood was much slimmer."

“There have definitely been a lot of low points in my career,” Long added. “You sign your first contract and all of your friends and family are all so happy for you. Then six months down the road, I get let go by Portland. I was like: ‘Is it over now? Six months? I didn't even get a start? I didn't get a chance? I didn't get to dress in the 18? What did I do wrong? How can I fix it?’ There was a lot of confusion. After I was let go, all my friends and family were calling to let me know it was going to be OK and asking what are you going to do? You have to deal with all of that BS.”

Getting demoted to the Red Bulls II was initially seen as a low moment for Long, who admits he doubted the viability of his career at that point. But things finally began to change. Up to that point the Oak Hills, California, native was a central midfielder but the Red Bulls staff and first team head coach Jesse March had a plan for him – and it involved a position switch to central defense.

Up to that point, he had only played the position a few times, but after being let go by two teams, decided to buy into the Red Bulls plans for him. From that moment, he decided he was “going to be a center back for life.”

The results exceeded all expectations. Long was named the USL Defender of the Year in 2016 where he, along with Tyler Adams, helped lead the team to championship. In 2017. he became a starter for the Red Bulls first team in MLS and helped it advance to the playoffs. Now in 2018, he’s one of the best defenders in the league, won a Supporters Shield, and is ready to start the playoffs on a team that conceded the fewest goals in the regular season.

"Then you want to make the national team. All this can happen in one year and then you set new expectations for yourself. It becomes a whirlwind about how far I can ride this uptick.” 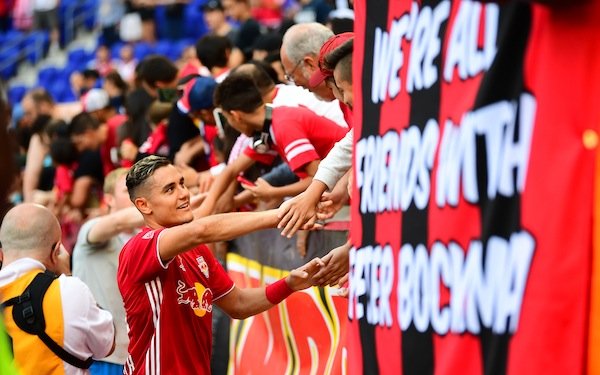 Drafted by Portland in 2014, Aaron Long didn't get MLS minutes until 2017, when he became a New York Red Bulls starter. Long has made 65 regular-season appearances in 2017 and 2018 and was an 2018 MLS All-Star Game selection. (Photo courtesy New York Red Bull)

For now, he smiles when he is asked about his career goals. “Trophies” is his first response.

After that, he states he wants to get called into as many national team camps as possible and he made a strong enough case in September against Peru where he is likely going to be in the plans for Gregg Berhalter, or whoever the next coach will be.

Despite being one of the older recent debutants for the national team, Long’s rise fits within the various structures of modern American player development knowing that it is going to be different for various players. Some like Christian Pulisic, Jonathan Amon, and Weston McKennie move abroad early. Some like Tyler Adams, DeAndre Yedlin, and Matt Miazga dominate MLS as teenagers before making a move abroad.

But Long’s path is part of what the league wants to see by way of using USL as a viable path toward getting to the highest level and preventing late-bloomers (or players simply in need of coaches who recognize the need for a position switch) from falling through the cracks if they’re not ready for MLS after being drafted.

“There are so many young guys right now taking their chances early on,” Long said. “They're such good players and they really deserve it. They're seen at such a high level at such an early age, they're almost used to it ... that's almost their lifestyle. We're doing better with our youth culture and we're doing a better job integrating them into academies or first teams. I think that helps a lot.”

“Coming from someone with a past that I've come from, there is always a little bit of fortune that plays into it,” he added. “Whether it's the right scout seeing you at the right time when you're having one of your best games and he's in the stadium watching you. Sometimes it's misfortune too. The USL serves its role to a max. Not every kid coming out of college is ready to step foot on an MLS team. Even if they do it, not every kid is ready to play at that moment. It a huge opportunity because if you do play well, you will get seen. There are enough eyes on you these days.”

While Long has been a breakout player in 2018, he is neither content nor does he think he’s come close to reaching his peak. He has a lot on his plate as New York prepares to open its post-season campaign against Columbus and a new U.S. national team coach will begin preparing for the Gold Cup in January.

But Long admits that he has long-term goals and those take him beyond MLS.

“Of course, there are always ambitions to want to be your best and play in the highest leagues against the top players,” Long said. “How soon? I have no idea. But there is that part of you that wants to test the waters. Those ambitions will always be there for me.”