I walked out of my last coaching course reinvigorated.

Fewer confusing drills that change from week to week. Now coaches could keep it simple. At the older ages, the players do roughly the same thing each week -- they show up and start playing small-sided games, they take a break to do some dynamic stretches, they do a modified scrimmage, and then they finish with a full-fledged scrimmage. Most practice plans have simpler exercises for younger ages as well.

The coaching changes each week. We emphasize something new with each session. Maybe it’s building the attack through the flanks. Maybe it’s staying compact defensively.

But does it work?

In my first season, the verdict is positive -- mostly. But as with all coaching methodologies, you’re going to find a reality check.

Granted, I had some unique issues. I coach two rec teams -- U14 and U16 -- and I figured it would be a good idea to have them both practice at the same time so we could claim an entire half of a field in space-challenged Northern Virginia. I won’t be doing that in the spring, where we’ll see how “Play-Practice-Play” works with one team on a quarter of a field. This fall, I didn’t have a lot of help from assistant coaches, so just organizing a bunch of small-sided games as the previous team’s session ended and my players arrived (late, as always) was a chore.

We can’t blame U.S. Soccer for teaching us how to do things under ideal circumstances -- a massive soccerplex in which each team has adequate space and the players are all punctual and attentive. It’s up to us to modify it, and that’s fine.

The more general issue is that the “practice” phase is inherently limiting. The controversial part is that the activities are supposed to “resemble the game.” In my coaching class, I was told we couldn’t use neutral players in these activities because that’s not “game-like.” 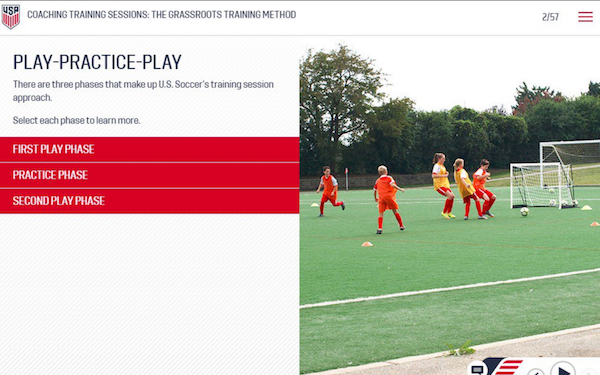 And the overemphasis on “game-like” extends to the Digital Coaching Center, where the lesson plans for U-8s include titles like “Improve Building-Up in Own Half” and “Improve Preventing Scoring Goals.” It’s U-8. The titles need to be “Dribbling,” “Using Multiple Surfaces of the Foot” and “No, Really, You’re Allowed to Pass the Ball.” You can still find some reasonable age-appropriate exercises -- which U.S. Soccer might criticize as not “game-like” -- in the excellent practice plans posted at Massachusetts Youth Soccer’s site, but the Digital Coaching Center’s plans are just a bit robotic and confusing.

We already have a “war on rondos” controversy. Maybe we can avoid a “war on sharks and minnows.”

Even at the older ages, we’re going to need some activities that build skills outside of a 7v6 or 8v8 activity. Players still need touches on the ball. We can hope they’re all watching Yael Averbuch training videos and doing exercises on their own, but some activities simply need to be done in practice.

Consider the transition from a small-sided field to a full-sized field. Suddenly, 12-year-old kids are dealing with longer passes and the occasional ball in the air. If you’re just doing scrimmages and modified scrimmages, particularly on the quarter-field on which we typically practice, you’re not going to have many opportunities to deal with such things.

We all love futsal. We all love 3v3 and 4v4 games. But at some point, a player needs to learn to make a 20-yard pass with a bit of pace on it. And players need to learn to deal with a ball that’s chest-high or head-high.

So I improvised. In a typical practice, I had my U-16s doing a USSF-friendly practice exercise using the big goal (which we couldn’t move) and counter goals, and then I used a narrow strip of the field to have my U-14s pass back and forth. After a few minutes, I’d add a defender so they had to do so under pressure. After 20 minutes or so, the teams switched. Maybe that exercise helped my center back make the beautiful 25-yard diagonal pass to my overlapping right midfielder, who went on to score.

And to avoid the chaos of trying to set up a bunch of cones for small-sided games as 30 players turned up at the field to start practice, I cheated. I had them do rondos. Don’t tell anyone.

It’s a better framework. It’s not as difficult to adapt to real-world rec soccer as the previous model was. If U.S. Soccer could follow through with more guidance on adjusting to limited field space and the need to get more touches on the ball, even at the older ages, we’ll have something that’ll work even for those of us who signed up to coach because someone had to.