Loudoun County had 169,599 residents in 2000. As the D.C. metro area has expanded westward, the county has grown to more than 400,000 residents by recent estimates, and it ranked as the country’s most affluent county  (by median household income) in 2017.


D.C. United once trained close to Loudoun County at a facility vacated by the Washington Redskins in Herndon, Virginia. Next year, the MLS club will move its training operations all the way into Loudoun at a facility in Leesburg that it will share with its new USL affiliate, Loudoun United.

The complex is roughly 40 miles from D.C. United’s new Audi Field, 36 miles from the Maryland SoccerPlex (home ground to the Washington Spirit and a total of 24 fields for youth and pro teams), and 25 miles from the suburban office/shopping center of Tysons Corner.

As reported by The Washington Post's Steven Goff, the club's timeline is have a coach hired (by D.C. United general manager Dave Kasper) around Dec. 1 and to move into its stadium in mid-summer 2019. The club will likely start its first USL season at a couple of other facilities in the area, possibly including Audi Field.

Adam Behnke, a former college runner at Columbia and Indiana and a former sales executive with the New York Yankees, is Loudoun United’s chief operating officer. 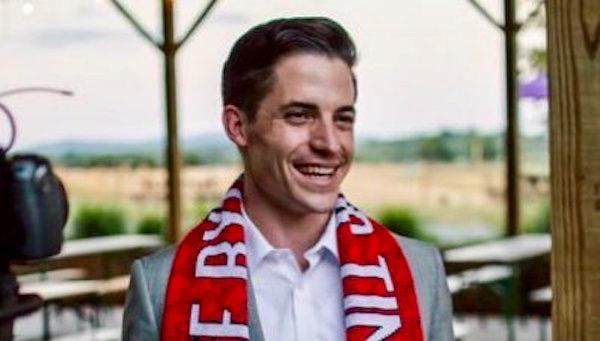 SOCCER AMERICA: What are the opportunities for interacting with D.C. United's first team?

ADAM BEHNKE: We obviously are the second-tier affiliate of D.C. United, and we plan and hope to have good interaction with D.C. United given that not only will we be building that 5,000-person stadium out in Leesburg, but there will also be the training facility which will be home to D.C. United and Loudoun United together. Whether it’s with camps or clinics and other opportunities to cross-promote with some of the players, we do hope we can go ahead and program with both Loudoun and D.C. United. We hope to have quite a bit of overlap between the two.

SA: How big is the training facility? Are we talking multiple fields and so forth to where you'd be running practices side by side and could move people around?

ADAM BEHNKE: The training facility itself will have four fields in total, one which is dedicated specifically to D.C. United and then one that's Loudoun United. The other two are in conjunction with (Loudoun County) Parks and Rec. They will program those two fields primarily, while we will have access to them a few hours during the weekdays throughout the year. We will be able to program the other two fields as well as the stadium with those camps and clinics and practices with D.C. United and Loudoun United.

SA: So if you have a team playing travel soccer or SFL (Suburban Friendship League, an interclub recreational league), that team could end up playing at this facility one field over from Loudoun United?

ADAM BEHNKE: Yeah, and that’s a big win for all of us. Our hope is that this is kind of the final piece to bridging the gap between youth soccer and MLS. Loudoun United is kind of that next tier above youth soccer and the academy. Our hope is that the kids will have opportunities to not only interact with our players but really learn from them within the different programming that we will have going on at the facilities. At the end of the day, we want to win the World Cup as a country, so we want to make sure our top talent is getting the best exposure to the best players, so that we can develop everybody and give them the best opportunity to grow and reach their full potential.

SA: What sort of relationship do you have with other youth clubs, particularly Loudoun, which is a fairly substantial club?

ADAM BEHNKE: They are. They’re one of the larger clubs in the area, and they’re directly across the street from where this facility is going to be built. We have engaged with them quite a few times over the course of the past few months and are continuing to work through a mutually beneficial partnership with them. They are a part of [D.C. United’s Pathway to Pro] program already, so we have that existing relationship from the players' side.

[Editor's note: D.C. United's Pathway to Pro system, announced in September, puts several local clubs into a pyramid with D.C. United at the top. Loudoun, along with a couple of other clubs in the program, fields boys Development Academy teams at the younger age groups.]

There's a huge opportunity to work with them and their kids and their families from a Loudoun United perspective, too. We're hoping that overlaps. We're working on what looks like officially and logistically so we can get to a partnership here before the start of the season. They are certainly a club that we would like to involve and have on our side along with the rest of the clubs in the area, given that we want all of their kids to be able to have access to our players, to be able to learn from them, to be able to watch them as role models and grow within their best skill set.

It goes well beyond Loudoun Soccer, but obviously Loudoun Soccer will be our neighbors, so we're hoping we can work together to help the growth of our sport.

SA: So where does the stadium stand now? Is there a big flat dirt area? What would I see if I drove out there right now (late October)?

ADAM BEHNKE: Funny you should ask -- I'm actually driving out there in the next two hours to take a look myself. Last I was out there, you would've seen about 54 acres of land which is full of primarily trees. So you would've seen a forest on the backside of some of those baseball fields of Philip A. Bolen Park and the continued work being done on Crosstrail Boulevard. 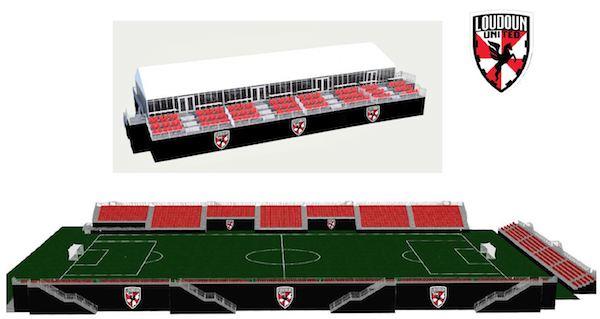 SA: In terms of stadium design, is it pretty straightforward? Is there anything particularly unique about it? Is it bleachers or permanent seating?

SA: How important is it to have a distinct identity? You've chosen "Loudoun United" rather than, say, "D.C. United 2" like some MLS affiliates call themselves.

We hope that by having the logo built the way it was, inspired by the Loudoun County flag with the red and white pinwheel and the jagged crest and paying homage to the robust equine industry there with the horse, we really want to incorporate as many elements of Loudoun as possible because this team and this organization will not be successful unless we have the buy-in and the commitment from our community members to really push this thing forward and support the club.

We see it as pretty important to be our own entity and our own brand out in Loudoun County. We take a lot of pride in that and hope we can have our fan base feeling the same way, that they're proud to represent that brand, that logo and that crest. It took quite a bit of time and effort putting that crest together. Every piece of it has a meaning.

You also see that wing of the eagle from D.C. United. We also realize that we are the second-tier affiliate of D.C. United, so there still is going to be some of that crossover, and we'll have that overlap.

SA: Where do you see the club drawing from? Not just Loudoun, but do you want to market in Fairfax (County) and western Maryland and West Virginia?

ADAM BEHNKE: Absolutely. We will call on every soccer fan in the area. If they want to fly in from across the country to watch a Loudoun United game, we'll gladly open our doors to them.

Wide and far, we’re hoping to have a really great fan base. We have seen quite a bit of momentum coming from the Leesburg and Ashburn [less than five miles away from the stadium] areas specifically, but I've also been impressed with the overlap from the D.C. United ticket fan base, who have already committed to the D.C. United club on the season-ticket front or have interacted with the D.C. United brand, also coming out to Loudoun for these games and have put forth interest in Loudoun as well. I’m not surprised by the overlap, but I am impressed with the commitment to soccer for folks that are coming from D.C. all the way out to Loudoun and vice versa, back and forth.

We've seen a strong overlap between the two brands, so that's been exciting. But our primary fan base right now, based off some of the numbers we're seeing, has been pretty focused on just north of the border in Maryland and then here in Ashburn and Leesburg.

SA: In terms of the player pool -- for the typical MLS affiliate, not all of the players are signed directly with (the parent club). How do you see that working?

ADAM BEHNKE: There’ll be a few different verticals in which we would look to assemble our team. One of them would be a journeyman within the USL who has already been playing in the league for some time. You could probably chalk those guys up as our veterans in the league. And of course giving opportunities to kids coming out of the academies and within the local youth clubs who are looking to elevate their game and get to the next step in their career. We’d love to have that local story where one of our players is coming straight out of the academy or straight out of a youth club and has gone through his time in college or wherever they may be on their life's journey. We’d love to have a local presence within the team itself, so we'll be keeping our eyes out for that local star.

Of course, you have to take a look at the international players as well. The fourth would be from D.C. United itself, the guys looking for more touches and playing time whether it's between matches or in a given season.